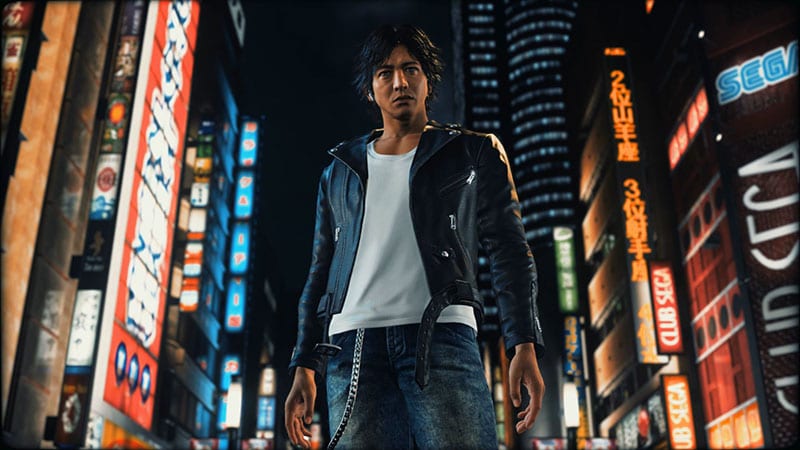 Judgment takes players back to the neon-lit streets of Kamurocho, this time telling the story of a layer-turned-detective named Takayuki Yagami.

Despite sharing a lot with the Yakuza series, Judgment tries a lot of new things with its courtroom-thriller narrative. From trailing suspects to searching crime scenes for evidence, this is a different beast from Yakuza.

Twinfinite had the chance to sit down with the game’s pr0ducer, Kazuki Hosokawa, at E3 2019 to learn all about the new game from Ryu Ga Gotoku Studio.

Editor’s Note: Please be aware that all of Kazuki Hosokawa’s comments were given to us by a translator, and have been slightly edited for clarity.

Hayes: Kamurocho evolves pretty radically with every iteration of the Yakuza franchise, and now with Judgement, following the evolution of the real-life Kabukicho. We could almost say that the whole series is a time capsule that lets us see how the district changed over the past thirty years. Is it challenging to keep reproducing such an ever-changing place?

Producer Kazuki Hosokawa: In terms of updates, like big updates for the design of Kamurocho itself, it’s separated into three times. The first is when the game was released on the PS2, and during that time Kamurocho was not featured in the third-person view, but when we got to PS3 we were able to greatly change that.

The other time that we updated it greatly was when we developed Yakuza 0 which was after Yakuza 5. But in Yakuza 0 we actually have to go into the 80s, the time actually changed, and so we did a lot of research into how things looked in the 80s, and that’s when we really started to update that also.

The last big update came when we released the game on PS4, and that was Yakuza 6. Then we added new features to Kamurocho so that players can actually go to new areas.

Within the three times that we did the updates, we actually kind of incorporated the actual towns, like what was missing, and we started to fill that in also.

Hayes: When Judgment was starting production, why was the decision made that it would be a game that uses the same framework as Yakuza, rather than something completely different?

Hayes: Is there anything that you tried in Judgment specifically as kind of testing it for a later project, or the next Yakuza game?

It’s definitely not something that we think about when we are developing.

Hayes: When was it decided that Takuya Kimura would be playing Yagami? Was that something you knew from the start?

Kazuki Hosokawa: Obviously we had an idea of including a big name star as a main character, that was already there. But it’s actually been a while since we started production that we decided to work with Takuya Kimura.

Hayes: Out of curiosity, how long has Judgment been in development? How did that work with other projects that were being developed by RGG at the time?

Kazuki Hosokawa: The timeline was actually, we were working on Judgment at the same time that we were producing Yakuza 6, it was going at the same time. It’s very interesting when we talk about the timeline of the production of a game, but usually coming from the script and all the way up to the actual game, it’s like two years.

And if we were talking about maybe the beginnings of the development stage, if it was starting from scratch like a blank page, it would be another one year prior to that.

Hayes: Obviously the Yakuza series is inspired by a lot of classic Japanese films, is there any piece of media that worked as specific inspiration for Judgment?

Kazuki Hosokawa: There isn’t anything directly inspiring Judgment, like compared to Yakuza. We don’t actually specifically have any title, but because the theme of the game is legal suspense everybody knows, and everybody has some idea of legal suspense as a theme.

Hayes: My favorite part of Judgment is the Friendship system, it adds so much personality to the world and to the city. What was the idea behind that, and why did you choose to develop it to such a degree?

Kazuki Hosokawa: The friendship event actually developed when we were thinking about how to solidify the character of Yagami, and that comes from, because he lives in Kamurocho as a resident, and interacting with the townspeople that are also living in Kamurocho gives Yagami a much more deeper character.

You know Kamurocho is his home ground for Yagami, and that aspect also gives Yagami depth, and that’s where the friendship events come from.

Hayes: As Judgment takes place within Kamurocho, would you like to return to characters like Yagami and Kaito again, and is there any chance of us seeing them again?

Kazuki Hosokawa: Yeah of course, we are hoping that we can continue the story in the future, and there’s no way that Yagami as a character can be separated from Kamurocho. We’re hoping that, yeah, once again he would be there.

Hayes: A while ago, you mentioned that more platforms were being considered for Judgment. Now that the PS4 version is almost out, do you have a clearer idea of what platforms those may be?

Kazuki Hosokawa: We are thinking about it, and we’re looking at it right now, releasing on any other platforms.

Hayes: With Judgment out in the west so close to the Japanese release, what’s next for fans in the West? What’s the next thing we’re going to see? Is it a new Yakuza game, or something else?

Kazuki Hosokawa: We can’t really talk about the future of the Yakuza series, but we’re hoping that fans can enjoy it, possibly in the future.

Hayes: The next generation is coming fast, with a new PlayStation console and Xbox Scarlett. As someone who has been making PlayStation games for a long time, what are your impressions of the new PlayStation so far? Do you plan to support it as soon as possible?

Kazuki Hosokawa: We are definitely thinking as a studio and considering the changes in the platforms, obviously, and changes in the specs that come with it. As a studio, we really are sensitive to all the changes, and we want to utilize these new specifications whenever we are developing anything new.

Hayes: Is Kamurocho somewhere that you want to keep telling stories in? Do you plan to keep making games set in Kamurocho?

Kazuki Hosokawa: (Laughs) So I can’t really say what is going to happen in the future, it’s really hard for me to say right now, but even if it were a continuation of Yakuza or even Judgment, I think it’s going to be difficult to think of the separate from Kamurocho. I can say that personally, I think that would be difficult.

Hayes: The side cases versus the main story in Judgment feel very tonally different, they feel very goofy while the main story feels serious. Is that something that you were really trying to go for with this game, even more than past Yakuza games?

When you’re actually in the story and you’re controlling the characters and you’re going through the story, I feel like it’s almost as if it’s a non-interactive film or drama series experience.

And we totally planned it that way so that the main story gives you kind of a general sense of Yagami as a character, but adding to it all these side cases gives him a much more well-rounded person, in the story.

There’s also us realizing that the fans really enjoyed this kind of gap between a serious character doing, you know, kind of silly things on the side. So that’s why we really wanted to include that also in Judgment.

Judgment launches on June 25 for PlayStation 4.