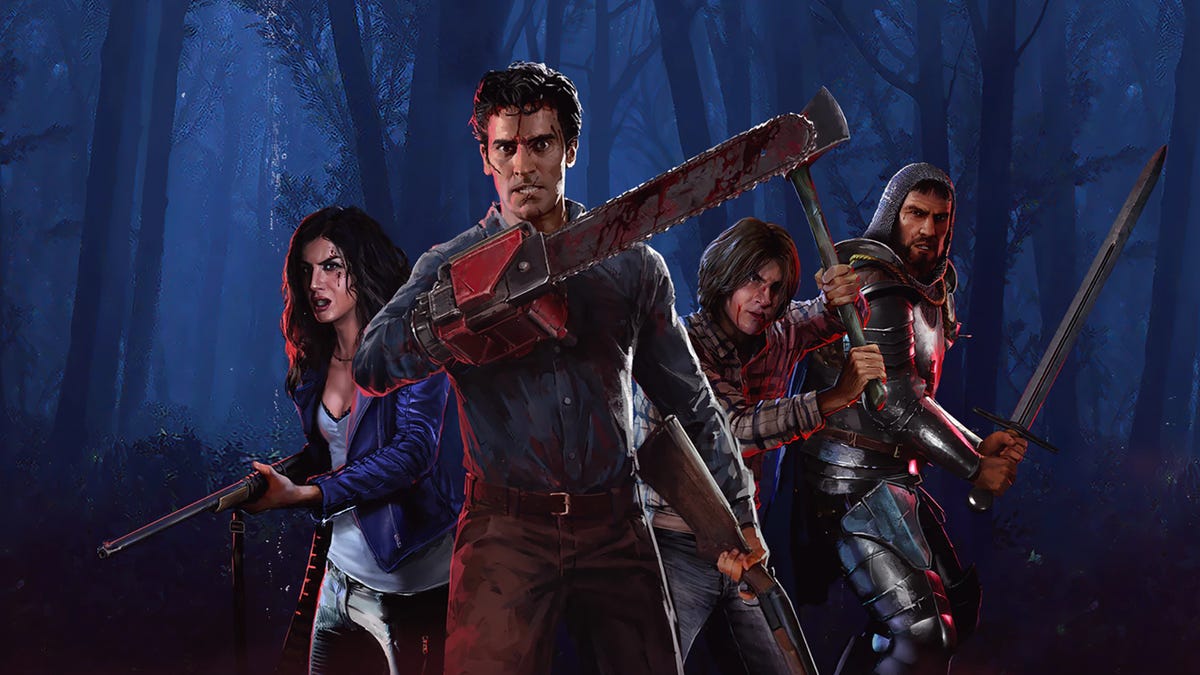 Evil Dead: The Game on PS5

On paper, Evil Dead: The Game shouldn’t be a thing that works. It’s a mesh of Dead by Daylight and Friday the 13th meets battle royale, meets looter shooter/slasher. It’s a chaotic mess that is at times held back by frustrating glitches, and a bit of a balancing issue especially during the early hours.

Evil Dead: The Game features plenty of iconic characters from the movies, including all four versions of Ash Williams, Annie Knowby, and even freaking Henry the Red. Folks who’d much rather play as the Kandarian Demon can pick from the Necromancer, Puppeteer, and the Warlord.

If you’re a fan of the movies, you’ll feel right at home here. The maps are huge and sprawling, and while the game is never actually scary, it’s also successful at evoking the eerie ambience of the original movie. You’ve got Henrietta fighting to get out of the basement in the cabin, tiny Ashes popping out of chests to frighten you, and trees that can lunge at you without any warning.

The game’s core 4v1 multiplayer mode centers around the survivors trying to piece a map together so that they can locate the Kandarian Dagger and the Necronomicon. Once they have both items, they can then confront the Demon itself and protect the Necronomicon in a final battle until the timer runs out.

The survivors will have plenty of opportunity to loot surrounding buildings and caves for better weapons and items, which make use of a rarity system: grey for common, blue for rare, purple for epic, and yellow for legendary. Along the way, the survivors may also pick up Pink F Points, which are used to upgrade various stats like health, stamina, and Fear. These upgrades only apply to that match, and are not permanent.

On the flip side, the Kandarian Demon is tasked with being as annoying as possible to try to stop the survivors from completing their tasks. The Demon player zooms around the map in first-person view, picking up Infernal Orbs which are used to summon minions and possess vehicles and characters when their Fear level is high enough.

This is where the fun starts, as Evil Dead: The Game really leans into that campy, B-movie horror vibe that Sam Raimi is so known for. The Kandarian Demon has a skill that can literally trigger an early 2000s style jumpscare for a player, where a scary monster face flashes in the middle of the screen with a loud scream that will absolutely cause you to jump the first time around. It sounds like it would get old as you sink more time into the game, and while the horror factor definitely wore off after that first time, I just found it funny every subsequent time that it happened.

Demons can also possess cars and drive them away, even while you’re already inside and trying to drive. One of the funniest experiences I had in Evil Dead: The Game occurred when my team was about to head towards the Necronomicon, which was 700 yards away. I started making my way towards a nearby car, only to watch it flash red before my eyes as it zipped away in the complete opposite direction.

The Demon skills are just so incredibly trolly and hilarious and I’ve lost count of the times when I’d just laugh and curse the Demon player for ruining our well-laid plans. It’s good that the game is so funny, because that almost makes up for how frustrating my early hours were as a survivor.

Evil Dead: The Game is a surprisingly difficult game to learn when you’re just getting started as a survivor, especially since the Demon player has such a natural advantage of playing alone and not having to work in a team of four. In those early hours, if your team isn’t working together, your chances of winning a match as a survivor are extremely slim.

In my first 10 hours with the game, I’d only won two matches as a survivor. The first time, I’d only won because the Demon player was probably new and still trying to grasp the basics. The second time, the Demon player disconnected, giving our team the win by default. Almost every other match was either a complete stomp where our team never even made it to the Demon itself, or we’d get close to the end only to get overpowered by the Demon’s minions because our team just wasn’t strong enough.

Then there were the times where the game would weirdly glitch out, and keep canceling my revives as I tried to bring back a downed teammate. Like, come on game. As if the odds weren’t stacked against us already.

As I played, however, I got progressively better with OG Ash, especially as I started raking in Spirit Points that could be used to unlock skills for him. On that note, it’s honestly shocking that the game doesn’t do a good job of explaining how to level up your characters, or how character experience is awarded, because it’s so damn vital.

Using OG Ash as an example (because he’s my main, duh), you can use your Spirit Points to unlock more of his skill tree and start unlocking simple perks like increasing amount of HP healed with Shemp’s Colas, and increasing stagger damage with melee and ranged weapons. As you get further down the tree, you start unlocking invaluable perks like starting a match with two Shemp’s Colas, restoring Fear and HP when you revive a teammate, and an increase in overall HP.

These perks are huge, and absolutely essential for doing well as a survivor. As Ash got stronger, and as the players I matched up with got stronger, we started to win more matches and it started to feel like we actually had a fighting chance against the Kandarian Demon. Which is why it really bums me out that every survivor and Demon has to be leveled up individually, resulting in the player having to go through a huge grind to even become somewhat competitive.

To put things into perspective, there are only three Demons available in the game right now, and 13 survivors, including the ones you unlock from single-player Missions. If you were a Demon main, your grinding time is considerably lower than that of a survivor main because you’ve only got three characters to level up. Sure, you don’t have to level up every single survivor, but as someone who loves to experiment with different characters, this is a huge deterrent that stops me from stepping out of my comfort zone.

I should note that it’s been less than a week since the game’s release, and things will naturally balance themselves out as people become more familiar with the game and learn how to play survivors more effectively even at a low level. Still, that doesn’t erase the fact that survivor mains have their work cut out for them if they want to eventually become proficient with every character.

Outside of the core multiplayer mode, there are also single-player Missions that you can play through to unlock even more survivors and outfits, which is always fun. I’m a big fan of single-player content in games that are predominantly focused on multiplayer, and I’m also a huge fan of games that give you the chance to unlock cool stuff just by playing more of it.

The Missions give you access to new characters like Bolivar, and Ash from Ash vs. Evil Dead, and it’s just awesome to have little things like that to work towards. These Missions are kind of like a look back at iconic moments from the movies, like the time where Ash’s girlfriend died and he had to grapple with chopping her head off and putting her to rest. RIP Linda.

I do wish the Missions were a little more involved, as they largely just take place in the same multiplayer maps and task you with running from point A to point B, collecting things and killing things along the way. But hey, I get it. This isn’t the main focus of the game, and they’re completely optional if you’re perfectly happy with the base roster.

I’ll admit that I’m a little concerned with the game’s longevity as well. Multiplayer-focused games like these can get stale easily, especially if the developers aren’t consistently supporting it with new content. With the Evil Dead IP, I’m also not entirely sure how many more characters we can add as DLC before the well eventually runs dry.

Even so, there’s just no denying the charm of Evil Dead: The Game. It’s a brilliant encapsulation of what made the movies so iconic and beloved, and it just oozes humor and delicious campiness at every turn. It’s still fairly rare for games attached to some sort of entertainment IP to do well, but I’d say Evil Dead’s already off to a groovy start.