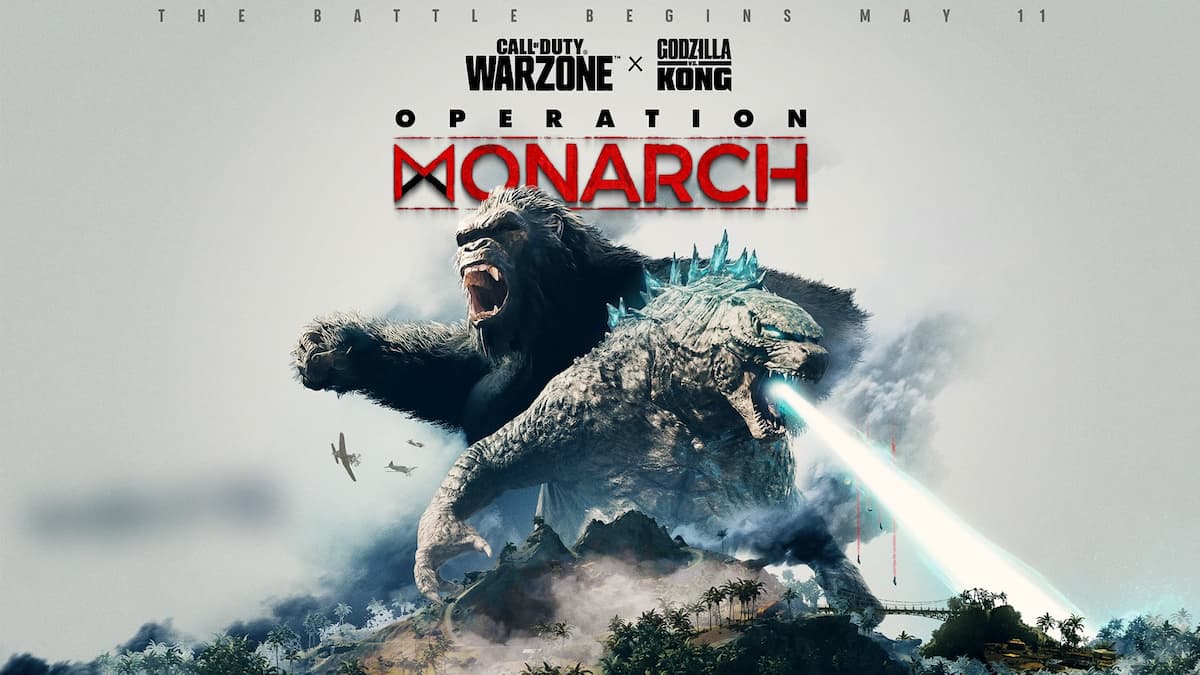 I’ve played my fair share of Call of Duty games, but nothing is like the experience of playing Call of Duty: Warzone Operation Monarch. I’ve been hyped for it since the release of the trailer and the confirmation of its arrival. Diving into this exclusive event and seeing the Titans causing havoc, made it feel like I was in both the King Kong and Godzilla films.

There is a sense of thrill and excitement when you hear Godzilla’s roar and see the land around you shake as King Kong jumps from place to place. Their movies are amazing to watch, but to be able to actually be stuck on an island while the two of them show their true powers is what makes this such a fun event.

The map used in Operation Monarch is a cut-down version of Caldera, a location featured in Warzone last year. Even if you have previously played on this island, it’s a different experience when two giant monsters are destroying everything around you.

The weapons scattered around the island are a good collection of heavy artillery to use against other players and the Titans. The themed items for this limited event proved to be quite powerful and include some very cool designs. For example, Godzilla’s Tracer Pack Bundle includes the Breath of Godzilla weapon, which shoots cool-blue tracer rounds and has a low recoil to steady your aim. For fans of King Kong, there is also a pack featuring the Temple of Kong, a weapon that excels in damaging players and Titans from an extended range.

The main objective of the game is to be the last team standing by increasing your Intel Meter and surviving attacks from enemies and the Titans. To increase your Intel Meter, you need to collect information that is based on research about the Titans and the special machinery developed to control them. This intel is called “Monarch Intel” and you can acquire it from fallen enemies, supply boxes, and loadout drops during Monarch Intel phases.

Players can get a bit lost on this big map and become an easy target for enemies. Another issue to look out for is the extended range of the Titans’ powers. You can get caught in the flames of Godzilla’s Heat Ray Breath or get hit by rocks that King Kong throws around the map. Once you get the hang of their patterns, you should be able to successfully avoid taking damage from these extended attacks.

There is a Resurgence rule set that brings you back to life after some time passes if someone on your team is still alive. So, don’t worry too much if you die from an enemy or a Titan.

The challenges within the game rewards players with exclusive items when triumphantly completing any of them. Having objectives to achieve during Operation Monarch is very entertaining since it creates more of a complex experience.

For example, there is a reward for playing this event for six hours which gives you the “Ancestral Skull” Charm, while collecting an extensive amount of Monarch Intel provides you with an Epic “Skyline Crasher” Calling Card. It’s always a nice touch when games include simple challenges for less experienced players while also having complex ones for the veterans of Call of Duty: Warzone.

If you complete all eight of these challenges, the game rewards you with a special weapon called the “Ancient Rivalry” Marksman Rifle Blueprint as shown here:

Completing challenges and getting rewarded for them does make the gameplay feel more impactful because at least you do have a certain goal to strive for. This overall experience is a great way of having all these worlds collide together to make one amazing event. Sam Rappaport, the Director of Interactive Media, has stated how King Kong and Godzilla aren’t meant to be seen as villains, but rather protectors on the official Call of Duty website.

This sentiment is evident in Operation Monarch because these are biological beings instilled with a battle for dominance; it’s in their nature. King Kong and Godzilla are also protectors for the players since their powers controlled from the Titan S.C.R.E.A.M can be used to defeat their enemies.

Be aware that this is only available for a limited time, and it will end on May 25, so get in there if any of this sounds compelling enough to give it a go.