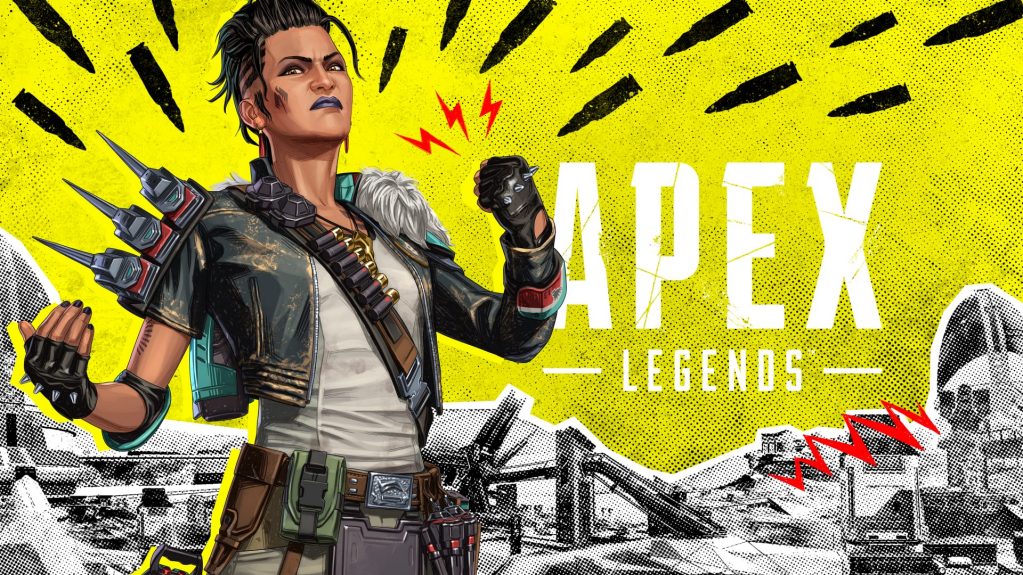 Apex Legends Season 12: Defiance goes live on Feb. 8, and, as usual, it’s bringing a number of changes to the game, both familiar and brand-new. Defiance adds a new Legend, significant map updates, a 9v9 LTM mode, and more. Here’s everything you need to know.

We were first introduced to Mad Maggie in Season 8 when she appeared in Fuse’s Stories From the Outlands introduction. They both hail from Salvo, and now Maggie is joining her old “friend” in the Apex Games.

Mad Maggie is known as a warlord who will do anything in the pursuit of true freedom for Salvo and its people. She’s bringing a bit of that chaotic violence to the roster with some offense-focused abilities.

Her Passive temporarily highlights enemies that she deals damage to while also giving her a speed boost whenever she’s holding a shotgun. Her Tactical is a drill that burrows into barriers like Gibraltar’s dome and Ramparts walls, then shoots fire at the enemies hiding behind them. Finally, her Ultimate is a wrecking ball that places speed-boosting pads wherever it rolls, and, for some extra mayhem, it’ll detonate near opposing players.

This isn’t the first time that Olympus is undergoing a few changes, but it’s the first time the map is receiving a major makeover that affects several areas. This “sabotaged” version of Olympus adds two large new POIs while also shifting around and adjusting other old ones.

The new Phase Driver POI on the south side of the map is an interactive one that can phase high-tier loot (including Gold loot) to that location. But, of course, there’s some risk involved. It’s extremely loud, which will alert other teams in the vicinity.

The second new POI is Terminal. It’s an internal area found underneath the Phase Runner tube that connected Bonsai Plaza to Labs. To make room for these large additions, the map has expanded, pushing out Bonsai and Solar Array just a bit.

There are also a number of smaller tweaks, like new alternate pathways that you can read in detail on the blog post.

Wildlife behavior and Drop Ship pathing have been updated for Storm Point following its release last season. Respawn is adjusting how Prowlers act and how much damage they deal in Season 12. Their damage is reduced from 30 to 20 and their knockback has also been toned down.

The reward for defeating Prowlers and clearing nests has been raised from 90 to 150 crafting materials, ad 250 for the huge nest in the middle of the map. Also, no more than three Prowlers can target any one player, with damage now set as the primary targeting factor. On top of all that, Prowlers are now non-aggressive when outside of the ring.

The Drop Ship pathing has been altered slightly to have more players drop in the northeast section of the map since it was visited less frequently during drops than other areas.

The Control limited-time 9v9 mode is a capture-the-point game type that will be live for three weeks starting from Season 12’s launch date. It’s reminiscent of Titanfall 2’s Hardpoint Domination mode and has teams fighting to take control of three separate spots on the map with infinite respawns.

Players will choose a loadout and work to play the objective while also increasing their ratings. The Apex Games are essentially a show for entertainment, and that aspect of the games is front and center here. As players make clutch plays, defeat opponents, and capture points, their ratings will go up tiers — from blue to purple to gold.

Every time your rating goes up a tier, you’ll earn one use of your Ultimate Ability, and the loadout you chose will get upgraded. There are still supply packages containing different weapons, so this LTM looks to be an action-packed one that’ll test teamwork in ways the other game modes don’t.

Respawn has celebrated the anniversary of Apex Legends in a few different ways in the past and, this time, we’ll be getting themed packs for Octane, Wattson, and Valkyrie to kick things off.

Octane’s thematic packs will be available from Feb. 8-15, Wattson’s from Feb. 15-22, and Valkyrie’s from Feb.22-Mar. 1. Presumably, these are coming alongside other anniversary-themed events like in previous years.

During each Legend’s timeframe, you can permanently unlock them simply by logging into the game. Players who have already unlocked these Legends will still be able to get their themed packs.

The stars of the Battle Pass this time around are Loba and Seer, as they both get Legendary skins to show off in Defiance. Loba gets her Breaking the Law outfit, while Seer gets one called Aces High.

The Standard Pass will cost 950 Apex Coins, while the Premium Pass can be purchased for 2,800 Apex Coins. The Premium one will boost you up to level 25 and automatically unlock the Seer Aces High skin, and both passes will unlock Epic skins for Ash, Lifeline, and Crypto.

As usual, there are also new emotes, charms, banners, and more to earn through the pass. You can check out the Defiance Battle Pass trailer right here for yourself to see a few of the cosmetics in-game.

You know the drill by now — weapons will be rotating in and out of the care packages once again. This time, the Alternator is back in the regular loot pool, and the Volt is now a care package weapon. Meanwhile, the Flatline and Longbow are both being put in Replicators, meaning that they can only be crafted and not found as ground loot.

Additionally, these are the Gold weapon rotations for this season:

As for hop-ups, Shatter Caps are receiving some changes. It is no longer a toggle attachment and will shift the Bocek Bow and 30-30 Repeater to shotgun spreads when picked up. Hammerpoint Rounds are making a return as an attachment that provides 50% unshielded damage for the P2020, 35% for the Mozambique, and even 35% for the RE-45 in this season.

There’s also a brand-new hop-up called the Kinetic Feeder that’s being added to the loot pool for the Peacekeeper and Triple Take. The attachment will automatically reload and charge both weapons whenever you slide.

Crypto and Caustic are receiving the most notable changes this season when it comes to Legend balances, and they’re on opposite ends of the update spectrum. Crypto is receiving some serious buffs while Caustic gets a major nerf.

Crypto will be able to throw his drone in order to quickly scan specific areas by pressing the Tactical button, instead of taking full control each and every time he uses it. Holding the button will give full control like before. The drone will also reorient itself when it’s thrown at a wall to avoid annoyances in positioning.

Caustic, on the other hand, will no longer be able to use his gas canisters as cover or as inconvenient obstructions. They will now be destructible after activation, meaning that they can be shot in order to deactivate them completely instead of having to wait out the gas or give up on a situation.

For all of the more specific number details for each weapon and Legend, you can check out the patch notes right here.

That’s everything you need to know about what’s coming in Apex Legends Season 12: Defiance. Be sure to have a look at all the new details and info before joining the fight when the update goes live next week.