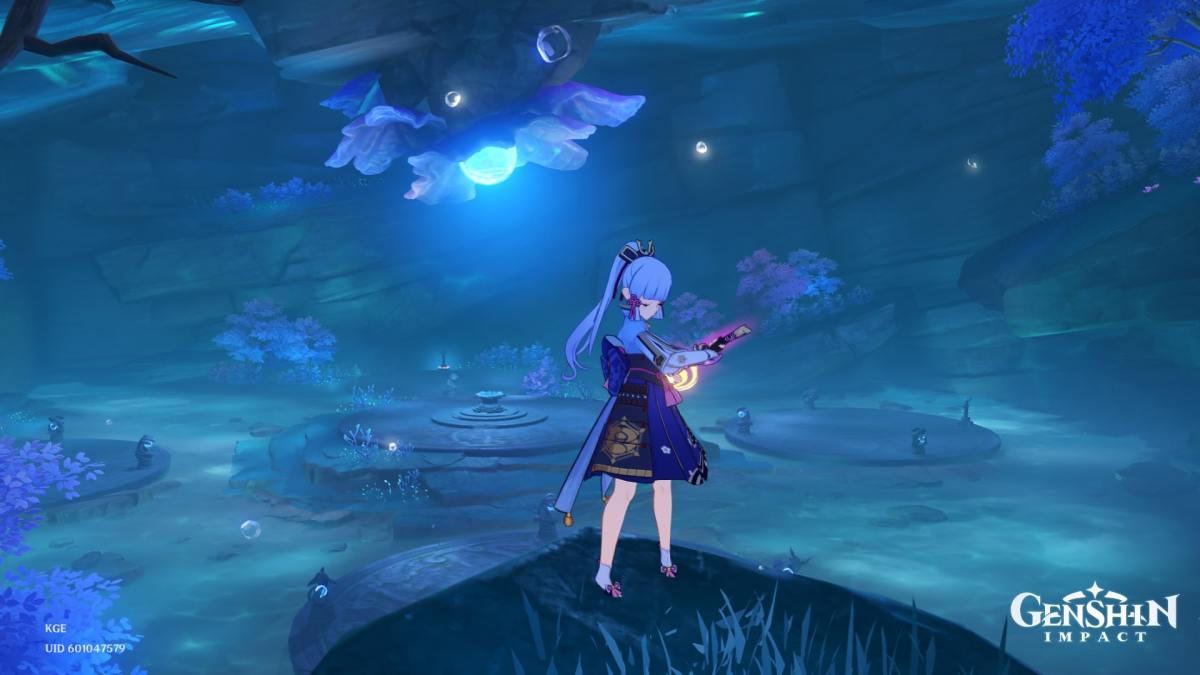 A brand-new major location has been added to the game with the Version 2.4 update, but it’s not exactly simple to get to. Certain World Quests need to be completed to enter the new Enkanomiya area, but this isn’t immediately obvious. Here’s how to complete The Moon-Bathed Deep quest in Genshin Impact by breaking the Eye Seal, Fin Seal, Fang Seal, Tail Seal, and final Heart Seal.

Completing this quest is the first necessary step in getting to Enkanomiya, underneath Inazuma. To start it, head to Mouun Shrine, on the west side of Watatsumi Island.

Speak to an NPC named Tsuyuko who is standing next to a rock to the north of the shrine. Here’s her exact location:

Tsuyuko will then task you with breaking five seals at four different locations on Watatsumi Island that are named after parts of a fish. In this guide, we’ll go through them one by one.

How to Break Eye of Watatsumi Seal

The nearest location is the Eye of Watatsumi — a small island just underneath the cliff that you’re currently standing on. Head over to it and read the stone tablet sitting next to the shrine to begin this first part of The Moon-Bathed Deep quest.

You’ll then need to use Elemental Sight to follow purple energy that’ll lead you to three orbs that have to be destroyed using Anemo, Pyro, or Cryo damage. The first orb is visible in the image below and is guarded by two Ruin Destroyers:

Simply return to the shrine and stone tablet after each orb is destroyed in order to find the purple path to the next one using Elemental Sight. Be careful, because enemies will be waiting at each orb.

The second one will trigger the appearance of three Anemo Specters, and it’s found on a cliff above the shrine, right here:

The third and final orb summons Electro Slimes and can be found right here, on the shore at the edge of the small island:

After all the orbs are destroyed and the Eye Seal is broken, return to the shrine to collect the Spirit Pearl that appears. Similar processes will be repeated three more times across Watatsumi Island.

How to Break Fang of Watatsumi Seal

This tablet and shrine pair is located on the northwestern shores of Watatsumi Island, on the edge of a cliff. Read the tablet and get ready to fight to break the Fang Seal in this part of The Moon-Bathed Deep. This time, instead of wandering around to find orbs, you’ll be protecting a Ley Line Monolith from six waves of enemies.

Here’s a list of which enemies to expect for each wave in this little challenge:

The challenge shouldn’t be too difficult at all, and you can use nearly any team comp here since the only elemental enemies some in the sixth wave. After protecting the Ley Line Monolith, the Spirit Pearl will appear at the shrine after the Fang Seal is broken.

You know the drill at this point. Read the stone tablet next to the small shrine at the marked location in the north of Watatsumi Island. Now, it’s time for puzzles.

The Fin Seal is an easy one to break though, so no need to worry. Just rotate each fish statue so that they’re all facing the center of the circular platform. Do this for both platforms in the area to complete this part of The Moon-Bathed Deep quest.

The ground will glow blue when the fish are facing in the right direction. After rotating them all correctly, the Spirit Pearl will appear at the shrine on the hill.

How to Break Tail of Watatsumi Seal

The fourth and final location is the tail, found on the southeast island in Watatsumi. head to the marked spot and read one last stone tablet. Your task here is to light the stone lamps near the shrine by using the Electrogranum Plant at the bottom of the hill.

Interact with the plant, then walk near the stone lamps to light them. Doing this will break the Tail Seal and summon Fatui enemies that need to be defeated, so be ready for a fight against a Hydrogunner, Cryogunner, and Pyroslinger.

After the fight, collect the Spirit Pearl. It turns out that there’s one more location that you’ll need to visit to wrap up this quest.

To break the final Heart Seal, you’ll need to once again align fish statues to face the center of their circular platforms, just like at the Fin of Watatsumi.

When statues get aligned, Hydro Mimics will appear at the center of each platform. They’re just like the enemies faced in the Oceanid boss fight. The mimics can easily overwhelm you if you aren’t prepared. Cryo attacks are a good choice to keep them frozen for as long as possible while dishing out damage.

Once these puzzles and battles are over, collect the Key of the Moon-Bathed Deep from the fountain in the middle of the room and speak to Tsuyuko to put an end to this World Quest.

This quest leads into another called The Still Water’s Flow, and that’s the last one that needs to be finished in order to gain access to Enkanomiya.

That’s everything you need to know about how to complete The Moon-Bathed Deep quest in Genshin Impact. Be sure to check out our guide wiki for the game for more tips, tricks, and other info.