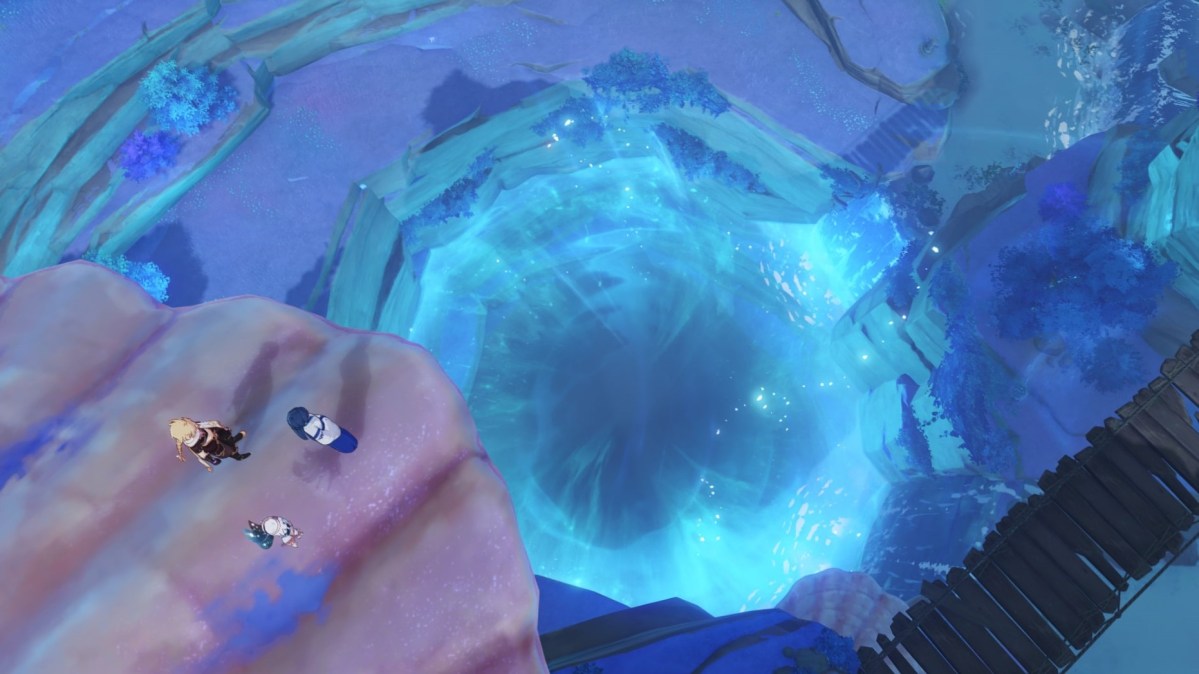 A whole new area called Enkanomiya has been added to the game in the Version 2.4 update that just went live. To access this new location underneath Inazuma, you’ll need to complete a specific World Quest. Here’s how to complete The Still Water’s Flow quest in Genshin Impact.

Completing the Moon-Bathed Deep World Quest will unlock The Still Water’s Flow. If you haven’t yet finished that one up, you can follow our detailed quest guide to get through it quickly.

Once that’s done, speak to Tsuyuko at the Sangonomiya Shrine on Watatsumi Island. She’s right next to where you’re standing if you use the Teleport Waypoint to get there.

Tsuyuko will ask you to find two Key Sigils at two separate locations on the island. Thankfully, they’re both already marked on the map. The first one is easier to get to, so we’re starting there.

This first Key Sigil is located in the exact same place as the Fin of Watatsumi Seal from the Moon-Bathed Deep quest. Two Ruin Defenders and two Ruin Scouts will be waiting to cause trouble. Defeat all four enemies to safely grab the Key Sigil here and continue The Still Water’s Flow.

Remember that mechanical enemies like these don’t have any elemental weaknesses, so you can take them out with any team comp that works best for you.

The second Key Sigil is located in the large chamber known as the Heart of Watatsumi. It’s the same room that contained the final seal in the Moon-Bathed Deep, even though the quest marker here is in the middle of the ocean. The small cave entrance is among the waterfalls surrounding Sangonomiya Shrine.

Here’s where to find the entrance to the Heart of Watatsumi, just in case you can’t remember its exact location from the previous quest:

The opening is on the cliff face, not the top of the cliff. So, you’ll need to float down a bit to reach it. Here’s what the cave entrance looks like:

Once you’re inside, two Fatui Hydrogunners and a Mirror Maiden will be waiting to fight. Try to take out the Hydrogunners first since they can heal other enemies and are an overall nuisance.

After winning the fight, grab the Key Sigil in the middle of the room to start the next part of The Still Water’s Flow.

Head to the next two marked locations on the map to activate the altars with the Key Sigils. Simply stand next to the glowing blue symbols found at the altars to “unlock” and activate them.

After activating both altars, return to Sangonomiya Shrine and speak to Tsuyuko once again. She will finally open up the entrance to Enkanomiya. All you need to do now is jump down into the giant whirlpool below to enter the new area.

To finish The Still Water’s Flow quest, you’ll actually need to venture deeper into Enkanomiya. Go beyond the first couple caves to enter an area containing a large gate, which will then complete the quest.

That’s everything you need to know about how to complete The Still Water’s Flow quest and enter Enkanomiya in Genshin Impact. Be sure to check out our guide wiki to find more tips, tricks, and other useful info on the game if you’re looking for more pointers.