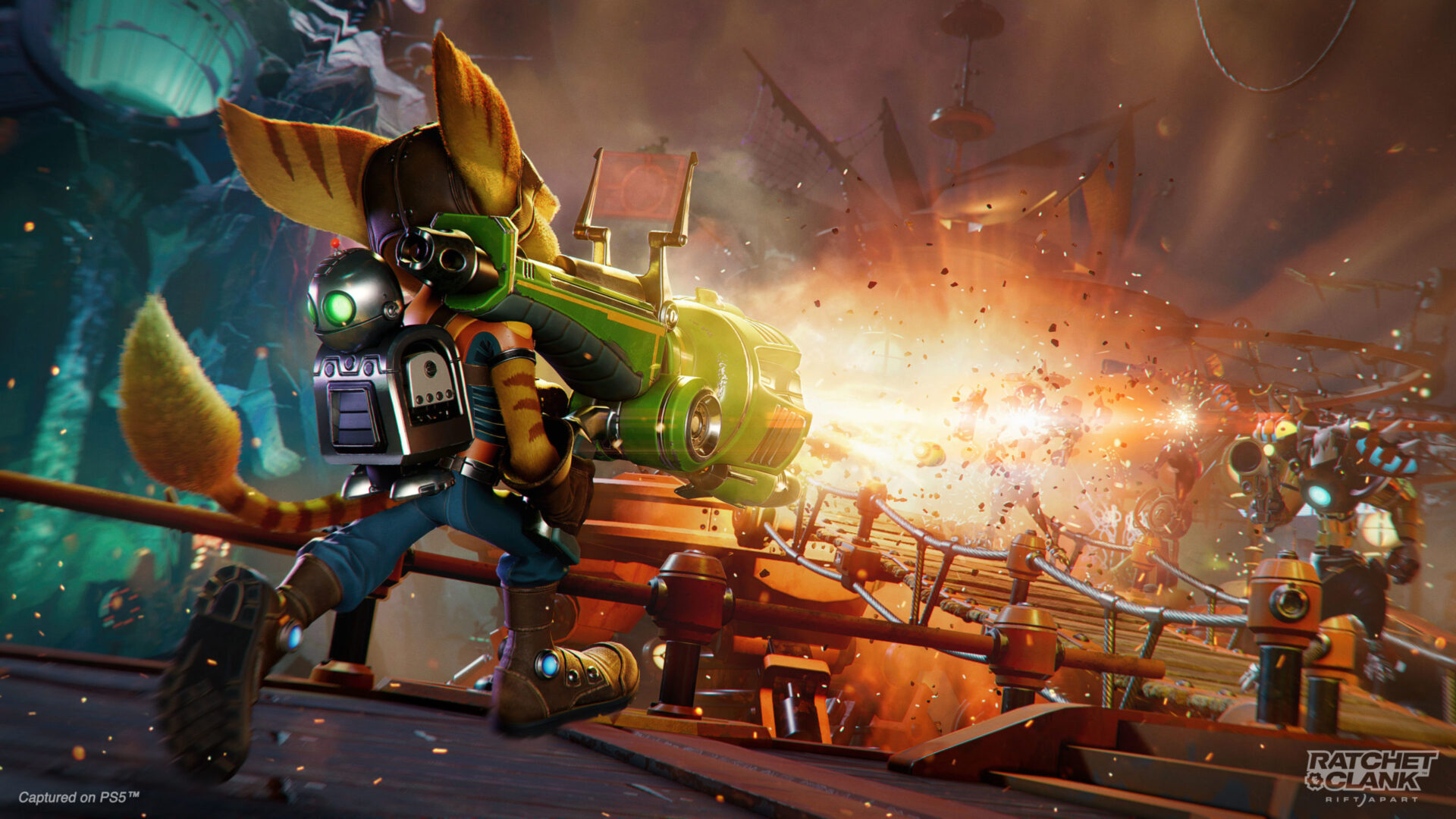 Once the Dimensinator goes haywire and you’re unceremoniously dumped into the alternate dimension version of Corson V, it’s time to get out there and become a problem for Emperor Nefarious. And the best way to do that is with some weapons provided by Ms. Zurkon. This Ratchet & Clank: Rift Apart best weapons guide should give you a feel for what will help cause the most destruction.

Note: The images below are the fully upgraded versions of the weapons with the exception of The Bouncer

Sniper rifles are typically pretty cool guns, but in Rift Apart the Headhunter is not one of the best weapons. If you hit a weak point on an enemy or boss you’ll do some massive damage. But in the end, the precision of the scope isn’t something that fits well in a run and gun game like Ratchet & Clank: Rift Apart. That’s why this is the worst weapon in the game.

The Blackhole Storm is a cool weapon that isn’t quite there in terms of the best weapons in Rift Apart. It can deal fantastic amounts of damage. Unfortunately, the gun’s range is too short to be considered for all situations. In small, enclosed rooms this gun is great, but most of in areas in this game are fairly wide open.

The Bombardier is a cool idea but executed poorly. To use this weapon, you toss out an object that turns into a little rocket-firing drone and takes to the sky. But don’t get too excited. The Bombardier not going to lay waste to crowds of enemies or deal chunks of damage to bosses. It’s fine just for dealing chip damage to bosses or enemies while you do the real damage with other weapons.

Just like the Burst Pistol, the Shatterbomb is just a decent beginner weapon. It’s essentially a glove that lets you throw grenades. These projectiles are fairly slow and incredibly inaccurate against flying enemies. It’s fine for taking on slow-moving groups of enemies or immobile bosses. But just make sure you either hit the target or somewhere very close by since the area of effect is not very large.

The Burst Pistol is an absolutely fine weapon. It’s not good or bad. It just does what it needs to do and nothing more. The gun fires off shots quickly and has decent range for a pistol. It’s not going to out-damage most of the guns in the game, but it’s easy to use and fairly accurate. It’s a good basic gun that makes learning how to aim and fire while standing or moving a breeze.

The Buzz Blades are much easier to fire while moving and they almost always hit their target. However, they just don’t do enough damage to truly be impactful. The best thing about the buzz blades is that they can hold a lot of ammo. Yet it’s just not powerful enough to be considered one of the best weapons in the game.

The Ricochet is an interesting weapon since it’s great for taking on enemies at a distance or flying enemies that can be a bit harder to hit. At the same time, it only deals damage to one enemy at a time and it doesn’t match some of the best weapons in Rift Apart. But it’s still a solid choice if you need something that will hit a single enemy almost 100% of the time.

Ratchet’s OmniWrench and Rivet’s Hammer are essentially the same weapons and they both deal fantastic damage. It’s always a bit risky to run right up to enemies in any game, but it’s a viable method of dealing damage with the movement options you have in Rift Apart. And of course, you can still throw this weapon with limited range. It still doesn’t outclass most guns, but it’s a good weapon that you get right from the start.

The Bouncer is one of those classic Ratchet & Clank guns that has been around since Going Commando. You toss out a bomb and it breaks up into smaller bombs for dealing massive damage to groups of enemies or immobile bosses. The only problem in Rift Apart is that there are so many flying enemies and groups of enemies that are more spread apart than in other games. The Bouncer is still a good weapon, but just not as good as it has been in the past.

The Lightning Rod just missed the top 10 by a few spots. The biggest reason why it isn’t up there is thanks to the weapon’s lack of damage. If it even had decent damage, the Lightning Rod would be a surefire top 10 choice. The main reason why it’s this high is that the gun is capable of momentarily stunning multiple enemies at the same time. It can be decent for taking on big groups of enemies because of this. But stopping any enemies in their tracks is always a good thing.

This is another one of those weapons that deals tons of damage but is held back by its inaccuracy against flying enemies. The Drillhound sends out a projectile that can fly through the air or go underground and pop up right under an enemy. It’s a great gun for slow-moving bosses and enemies with large pools of health. It’ll quickly cut them down faster than most guns in the game.

Now that we’re in the top 10 it’s time for the best of the best. The Glove of Doom is another classic weapon in the Ratchet & Clank Franchise. When you toss out a Doom Egg a bunch of little Agents of Doom pop out and start relentlessly attacking your enemies. They’re not going to do much against flying enemies, but they’re a great way to get some considerable early damage on enemies and bosses.

The Enforcer is an incredible double-barrel shotgun with an equally incredible name. It’s a very powerful gun that will make short work of most baddies. As you would expect from a shotgun, it’s great for taking on crowds of enemies. And once you fully upgrade the gun, it gets two more barrels for even more shotgun fun. The Enforcer’s biggest drawback is a slow rate of fire that ends up placing it behind some of the better shotguns in the game.

I promise this is almost the last shotgun on the list. It’s not the most powerful gun, but it more than makes up for it by being one of the best defensive guns in the game. If you hold down L2 to aim the gun, it will deploy a shield that blocks incoming projectiles. You can move while holding up this shield and fearlessly run into a room full of enemies. Once the gun is fully upgraded, you’ll even be able to fire those projectiles back at your enemies.

Mr. Fungi is very similar to the Glove of Doom in Rift Apart. But it’s more effective at hitting flying enemies and it inflicts poison which can cause more damage over time. It works the same way as the Glove of Doom where you toss out a projectile that turns into a little helper. The fact that it’s extremely useful for taking on any kind of single enemy, groups of enemies or even bosses makes it one of the best weapons in Rift Apart. On top of that, Mr. Fungi and Ms. Fungal will draw enemy attention away from you.

This is probably one of the first weapons you get in the game that will truly impress you. The Negatron Collider fires a continuous beam of energy for a short amount of time with decent range. It’s good for taking on ranged enemies, flying enemies, or even bosses. The Negatron Collider is an exceptionally powerful weapon that is absolutely worth using and upgrading.

There’s nothing better than a good shotgun in a video game. And there’s nothing more entertaining than turning your beautifully rendered 3D enemies into blocky pixels. The Pixelizer combines these two things and does it with lots of damage. Fully upgraded, it can also make enemies drop nanotech and ammo. On top of that, pixelized enemies will temporarily be stunned. What’s not to love? The Pixelizer has a great grab bag of effects and deals great damage.

The next two weapons are very similar and their placement could truly go either way. The Cold Snap is a great weapon because it can freeze enemies and turn them into projectiles for taking out more bad guys. The freeze lasts for a considerably long amount of time and lets you focus on other problems or gives you easy shots at a boss or moving target. It doesn’t deal a ton of damage itself, but just like the Lightning Rod, stopping enemies is just too good.

The main function of the Topiary Sprinkler is the same as the Cold Snap. You stop enemies in their tracks and deal damage with another weapon. For this gun, you toss out a sprinkler that targets bosses or enemies and renders them immobile. What makes it better than the Cold Snap is that the enemies aren’t instantly unfrozen as soon as you hit them, allowing for more damage to be delt. Plus, the fully upgraded sprinkler also deals constant chip damage.

Well, no there’s no doubt what’s coming up next. Not that there was ever a doubt. But for now, it’s worth talking about just how ridiculously good the Warmonger is. This classic Ratchet & Clank weapon is the best ranged weapon in the game for taking on large single targets. The only concern is the low amount of ammo it can hold. But that shouldn’t become a problem if you save it for taking out only the bulkiest enemies and bosses.

Somehow Insomniac keeps on outdoing each idea it comes up with for the latest RYNO. If you love doing ridiculous damage to anything in the game and causing absolute havoc on screen, then the RYNO 8 is for you. When you fire this weapon it opens up a portal where you’re aiming and a random object falls out of the portal, damaging anything below and nearby. Fully upgrading this weapon makes a single shot open multiple portals, causing even more chaos and damage.

We hope you found this Ratchet & Clank: Rift Apart best weapons guide useful in helping you learn a little more about each gun in the game. If there’s a gun on this list that you enjoy using, don’t let us yuck your yum. Everyone plays the game differently. Let us know what your favorites are in the comments and if there’s anything else you need to learn about this game, then just check out our guide wiki.