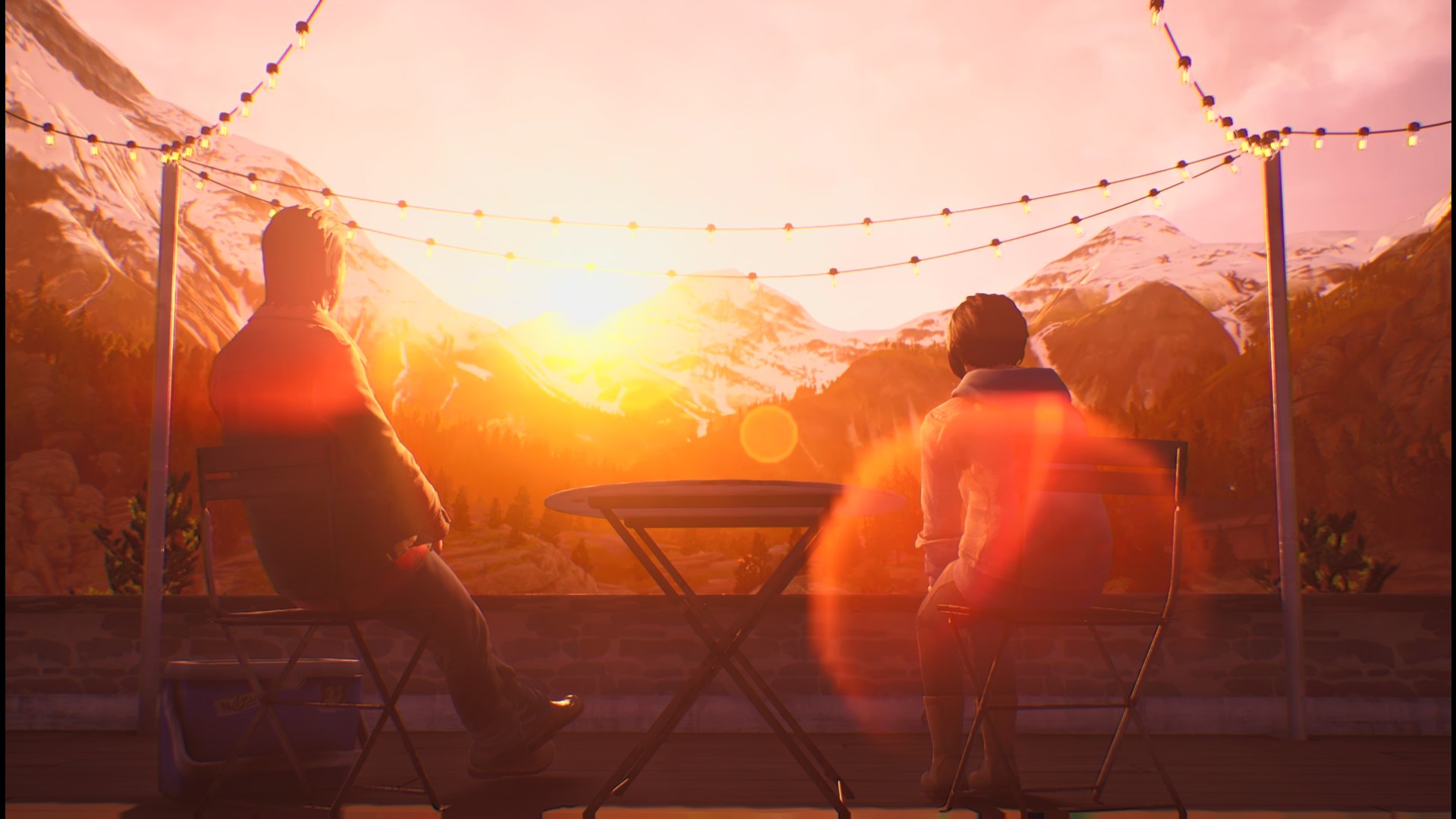 I’ve already gone over the game’s opening chapter in my hands-on preview, but for those that didn’t read it, I’ll give you a quick briefer. Life Is Strange: True Colors follows the story of Alex Chen, a teenage girl who’s been gifted — or cursed with, as she would say — the ability to read, feel, and extract the inner emotions of those in close proximity to her. That can be family members, or a random stranger passing in the street. She’s an empath, if you will, and following a rather tumultuous childhood which saw her and her old brother Gabe separated for eight years, she’s finally able to leave the care home she was placed in to go and live with him in Haven Springs.

All seems fine and dandy as the two reunite, he introduces her to her new digs — his old flat as he’s now living with his girlfriend Charlotte and her son Ethan –, they air rock out to a Kings of Leon number in one of the most heartwarming scenes in the game and dot around town as Gabe introduces his sister to the locals.

Things soon take a turn for the worst, however, as Gabe is killed in mysterious circumstances, and so Alex dons her best Sherlock Holmes cap and gets to work investigating the seedy underbelly of Haven Springs.

In its opening chapter, True Colors can feel a little slow going at times. The mining town of Haven Springs is a tranquil little place, teeming with vibrant flowers and quaint little shops like a record store, flower shop, and of course, in true Colorado fashion, a dispensary. The locals are super friendly, each with their own unique little quirks that make them likable enough, or in the instances of some, just purely intriguing, resulting in me frequently checking in with them throughout the course of the game.

Underneath that friendly surface layer, however, there are unique human beings, each with their own complex emotions: ambitions, desires, worries, and regrets. These perfectly crafted characters are what make True Colors such a joy to play beyond its gripping, overarching narrative. Alex’s ability to read the thoughts and deep-seated emotions of those around her opens up opportunities to probe them for more information on the goings-on around town, or uncover their own dark secrets which are particularly dramatic in true Life Is Strange fashion.

It doesn’t take long for the action to pick up, and while I’m going to be particularly vague to save you from story spoilers — as I do believe any Life Is Strange game is best experienced when you go in as blind as possible — you can expect all the twists and turns the series is renowned for. My only gripe was the pacing sometimes felt a little off. As previously mentioned, the opening chapter can feel very slow going, and chapter 2 feels very short and sweet in contrast.

Thankfully, this isn’t too much of an issue, given all five chapters are available to play from day one, so those months-long waits we’d seen with every previous entry in the series are no more. It makes following the narrative much easier from chapter to chapter, and I sincerely hope this is something the series sticks with moving forward.

The detective work of Alex can get pretty emotionally draining but never feels like slow going. There’s always a revelation just around the corner to keep you hooked, and some light-hearted moments — Episode 3’s LARP a real highlight of the whole experience, more on that later — to balance things out when things get a little heavier.

My only real complaint with the narrative came in a particular revelation towards the end of the game, one that felt a little trite, especially when put in the context of the rest of the series. That being said, the moments that followed this provided enough gripping moments and sheer panic on my part — as I assumed I’d goofed up some major choices — that this wasn’t a deal-breaker. People are still going to love the overarching story and its many plot twists, even if it gets a little clichéd at times. But that’s Life Is Strange for you.

What makes True Colors really stand out, as I’ve alluded to above, is how Alex’s ability to absorb and manipulate the strong emotions of others is woven into the narrative-driven gameplay. She’s able to uncover the truth and channel those emotions herself in order to overcome difficult situations or get a better understanding of what people are going through. As we emerge from a time where the world was so isolated and shut away, True Colors serves as an important reminder that what we see on the surface isn’t necessarily someone’s true feelings. Humans are complex beings, trying to save face and protecting themselves and others by concealing their deepest emotions and thoughts.

It’s not just the mysterious death of Gabe Chen where Alex’s power comes into play, but in the day-to-day moments around Haven Springs, too. Helping a bird watcher find that pesky hawk she’s worried about seeking out, for example, or helping an anxious couple express their feelings to one another and get together. It adds another, deeper layer to each character. They feel more authentically human, dealing with their own issues in the shadow of the dark revelations that have gripped the town. And it’s up to you how involved you get in it all.

Where the powers of previous protagonists in the series have felt somewhat gimmicky, like Chloe’s backtalk ability in Before the Storm or Daniel’s telekinesis, and Alex’s empath ability genuinely do enhance the gameplay here. This time around, they genuinely help you make those tough decisions — or just bringing them to the foreground — and by making you relate to the characters.

Catching the often unstoppable chatterbox, Duckie, in a moment where he’s lost for words on a topic that’s clearly depressing him, for example, and using your ability to better understand it and helping him overcome it. Or helping a random character around town find his missing dog and giving him the answer to a game at the spring festival so he can bring home some treats for it. It’s these moments that feel so profound or feel-good, and yet can so easily be missed.

Haven Springs is a treasure trove of things to see, people to help, and greater context to be gleaned from resonant objects and other random items around town, that it doesn’t cater to those who just make a beeline from main objective to main objective. Soak up your surroundings — and the emotions of those around you — and your experience with the game will be all the better for it.

Tough decisions are part and parcel of the Life Is Strange series, and for the most part, True Colors delivers these in abundance. There were plenty of times I sat there, in decision paralysis, unable to figure out which choice was the right one for the moment. It says a lot for the writing that I cared so much about my impact on Haven Springs and the people that inhabit it.

However, Deck Nine claims that its final episode takes into account a number of your decisions from previous episodes to determine the outcome of the game you get. While I can see this rang true for some of the choices I’d made, others felt far less consequential outside of a few sentences of dialog from certain characters in a particular scene. I’ve gone back and tried a few different choices since rolling the credits, and I was still left a little confused on how some choices were supposed to impact my relationship with certain characters.

I assume this was done to prevent just one of your decisions from boxing you into one of True Colors’ multiple endings, but I’d have preferred a bolder consequence to give me more impetus to start the game over and make all the opposite choices from my first playthrough. As it stands, I’m more likely to dive into the chapter select and tweak a few things and see how they play out.

Life Is Strange: True Colors’ performance on PS5 was largely very strong. Load times were significantly cut down, visuals look significantly better while still retaining that comic-book-style aesthetic, and Deck Nine has clearly put a lot of time into making characters’ facial animations more authentic and subtle. A quick glance to the side in an awkward moment, or a furrowed brow as Alex comprehends someone’s brazen remarks really enhance the impressiveness of the experience. It helps to make social interactions far more realistic, without the need for over-the-top arm movements to articulate someone’s angry or worried.

These were easily one of the biggest improvements that could be made in the series without running the risk of spoiling what makes the series so special, and accompanied by a general improvement of visuals across the board ensures the game, at least on PS5, felt like a true step forward for the series.

It’d be very remiss of me not to mention Life Is Strange: True Colors’ soundtrack in this review, given how significant music has always been to the series, and Deck Nine once again has knocked it out of the park. The original soundtrack from Angus & Julia Stone punctuates Alex’s ‘Zen’ moments — sections in the game where the camera pans her surroundings while Alex monologues about recent goings-on, her thoughts, and feelings — in a way that had me grinning like an idiot. Having listened to it for the past two weeks nearly on repeat, I was impressed at the way Deck Nine’s managed to weave these tracks so delicately into the experience without feeling forced, much like they have for Phoebe Bridgers’ Scott Street, or Novo Amor’s Carry You. If you were a fan of the music in previous entries in the series — and I mean, c’mon, who wasn’t? — you’re in for a real treat here.

I do have to note that True Colors did have a handful of technical issues in its later episodes. Throughout episode 3, the game seemed to suffer a screen flickering issue that turning my display and PS5 completely off and on, nor restarting the game would resolve. In a scene transition, Alex was randomly T-posing for a hot second before returning to her original, laidback posture. It’s not enough to detract from the overall enjoyment of the game but needs to be mentioned here for the sake of full transparency.

Life Is Strange: True Colors is right up there as one of the best games in the series, if not the outright best. Its characters are interestingly complex and believable, the writing is strong — albeit a bit clichéd in true Life Is Strange fashion — and its more sinister narrative has plenty of twists and turns that’ll keep you hooked. It’s all punctuated by heartwarming, lighthearted sections reminiscent of Before the Storm’s beloved ‘play’ scene, and its decisions will have you second-guessing yourself for hours. The whole experience is wrapped up in the strongest presentation values and a soundtrack that never skips a beat. This is a must-play for fans of the series, and a serious contender for my Game of the Year.