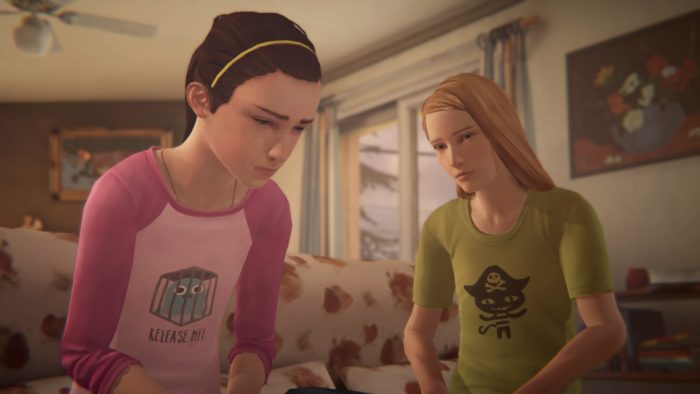 Life Is Strange: Before the Storm – Farewell on PS4

Marking the end of Deck Nine’s Life Is Strange: Before the Storm mini-series, Farewell readjusts its focus back to Max and Chloe. Farewell thrusts us even further back into the past, taking us into a particularly turbulent time in the youngsters’ lives. Chloe has just been accepted for a scholarship at Blackwell Academy which appears not to be an immediately perfect fit for her, while Max struggles to come to terms with her family leaving for Seattle in a matter of days. And though it may not bring any time-control mechanics, or even much gameplay at all, Farewell is a beautifully crafted final chapter for Chloe and Max’s story.

Beginning with a clear-out of junk from Chloe’s room that’s sure to give you pangs of nostalgia of doing something similar in your childhood, the day continues on with them embarking on more goofy and childish adventures that just highlight how close these two girls are. Despite having only really known Max and Chloe for a handful of hours over both series, there’s a familiar feeling to Farewell. Even in her younger years, Chloe is still the rebellious loudmouth while Max is her more reserved counterpart. Despite being opposites in a sense, their friendship is heartwarming to witness, as is flicking through the many different objects and personal possessions that recount their previous epic adventures in Farewell.

Playing through Farewell and knowing the ultimate conclusion to Max and Chloe’s story is a little saddening, though. Seeing these characters interact with one another in such a carefree manner, during a time in their life where they’re hunting down treasure buried by themselves five years ago, rather than glitches in time, is a refreshing change of pace that provides ample time for fans to bid their final farewell to the dynamic duo.

Speaking of the dynamic duo, Farewell sees both Ashly Burch and Hannah Telle return to their existing roles as Chloe and Max respectively from the original series. While many will be delighted to hear the two throw banter back at one another and get all mushy once in a while, there’s something not quite right with Telle’s performance. Some lines can sound airy, as if she’s struggling to deliver the younger-sounding Max.

Discussing much more about what Farewell’s narrative holds really would detract from your own personal experience playing it. However, there are certainly moments that feel fairly predictable in comparison to the writing throughout the rest of the series.

Outside of the obvious narrative, there’s not a whole lot of gameplay in Farewell, even when judged against the low standards of the series. Aside from engaging in conversation with Chloe every once in a while, you’ll interact with objects and occasionally have to find an item. Even decision making feels largely inconsequential as there’s not another episode for Deck Nine to follow up on your responses with.

It doesn’t matter, though, partly because the short duration doesn’t mean it outstays its welcome, but also because the main appeal of Farewell is the opportunity to see Chloe and Max one last time at a completely different stage of their lives. That’s what Deck Nine has focused on here, with little notes, trinkets, and other prized possessions from the duo’s past setting Max off on nostalgic monologues of all the great times they’ve shared. In this regard, Deck Nine has delivered. Farewell is a heartfelt look back at two characters oblivious of the trials and tribulations they’ll have to face in the future, enjoying the company of their best friend.

And that’s what makes Life Is Strange such a special series to so many people. It manages to evoke such powerful emotions through its solid writing, relatable characters, and a soundtrack that perfectly encapsulates the mood. Everything has such a cinematic and personal feel to it, and this is highlighted in Farewell’s most powerful cutscene, sublimely paired up with Ben Howard’s Black Flies.

At about an hour in length (90 minutes max if you take your time), Farewell doesn’t try and drag its narrative out. If you’re an absolute die-hard fan of Life Is Strange, which you likely are if you’re considering the deluxe edition, then jump right in and say your own goodbyes to Max and Chloe. However, if you’ve not played both the original series and Before the Storm in their entirety, Farewell likely won’t resonate with you in the same way.