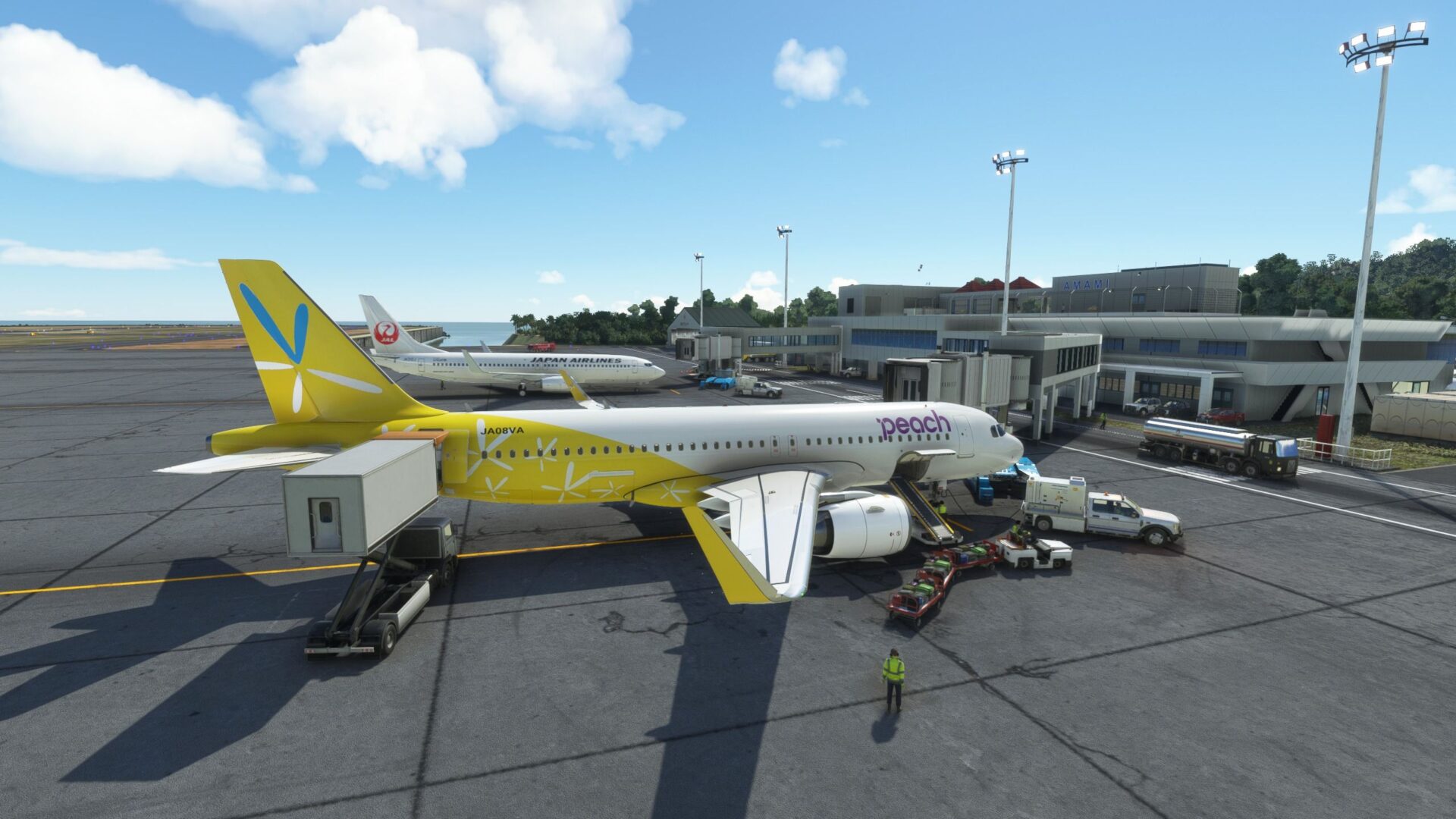 It serves the beautiful Amami Oshima, one of the largest islands between Kyushu and Okinawa. While it isn’t a large hub, it isn’t as small as most Japanese island airports and it’s served by multiple daily airline flights operating up to Airbus A320s and Boeing 737s.

Due to that, even if you’re interested in airliners more than in general aviation, you can definitely operate here even without waiting for the release for Microsoft Flight Simulator of turboprops like the ATRs and Dash-8s. The relatively short 6,562′ (2000m) runway creates a nice challenge when landing with bigger aircraft.

The add-on is available on SimMarket for approximately $15, and comes with its own installer. It’ll also come to the official marketplace for both PC and Xbox soon.

If you’d like an extensive look at the scenery, you can watch an ILS approach and landing on runway 03 in the first video above, and a full flyover in a variety of lighting and weather conditions in the second below.

One relevant premise is that the default Amami Airport in Microsoft Flight Simulator is nearly useless. Likely due to the lack of good mapping data, all the parking ramps are completely out of whack and the terrain is flat at sea level.

On the other hand, the developers of this add-on put a lot of effort into terraforming the reclaimed land that serves as a base for the runway, while also modeling the breakwaters that protect it from the sea. They also reworked the vegetation around the airport to better represent the subtropical environment that you’d see on Amami Oshima.

Functionally, everything works correctly. Published SIDs and STARs are available and only the ILS, RNAV, and VOR approaches all work fine, and the PAPI lights are also calibrated as they should, helping with visual landings.

All the taxiways and parking ramps are correctly implemented, which means that you’ll find your way to and from the runway easily whether you request guidance to the default ATC or online controllers on VATSIM and similar networks. This also means that AI aircraft can use the airport with no issue, which isn’t entirely common in Microsoft Flight Simulator.

All the ground services are implemented and active, including the fuel trucks that so often get forgotten by many developers.

The materials of the runway, taxiways, and apron are decently represented but the markings aren’t 100% correct. For instance, you’ll see a discrepancy in the aiming zone stripes, and the additional stripes that mark the runway’s middle point are missing.

The modeling and texturing of the terminal is nicely done and detailed, both airside and landside. The signage is correct and there is plenty of care for small details like the observation deck and bus stops. The interior isn’t modeled, and unfortunately, the jetways are default. Yet, the quality is pretty good overall.

The same can be said for the tower, the Japan Air Commuter Hangar, the warehouses, and offices, on top of accessorial elements like antennas, apron lamps, and enough clutter to make the airside area feel lively.

Particularly pleasing is the landside area with its parking lots, sitting areas, overhangs and lines of decorative palm trees. Unlike many other developers, Simulación Extrema actually textured the streets instead of leaving the aerials “naked,” which creates a much more pleasing and crisp effect. Only a rather iconic statue of a boy riding a turtle is missing, and some more of the signage for tourists would make the representation even better.

There are even a few buildings modeled further inland, like the ENEOS gas station, and the Man-ya fishing harbor just off the threshold of Runway 21. Those elements certainly contribute to correctly recreating Amami’s atmosphere.

While most of the airport behaves well in the rain, there are a few areas centered on the apron lines that don’t take on the “wet” effect. This is likely an oversight, but it could certainly use fixing.

On the other hand, night lighting is well done and grants plenty of visibility during operations after dark, on top of looking quite fetching.

In terms of performance, as you can see in the comparison above, my PC (RTX 3070, Ryzen 9 3900x, 32 GB RAM) loses less than 5 FPS at 1440p resolution and Ultra detail settings, staying above 60 FPS. The add-on is certainly well-optimized considering how much detail it adds to the default scenery.

Ultimately, Amami Airport is not perfect and it comes with a few issues that hopefully will be corrected down the line. That being said, it’s still a vast improvement over the poor default rendition in Microsoft Flight Simulator. If you love flying to island destinations in Japan for that season-appropriate summer feeling, this is certainly an add-on worth considering. 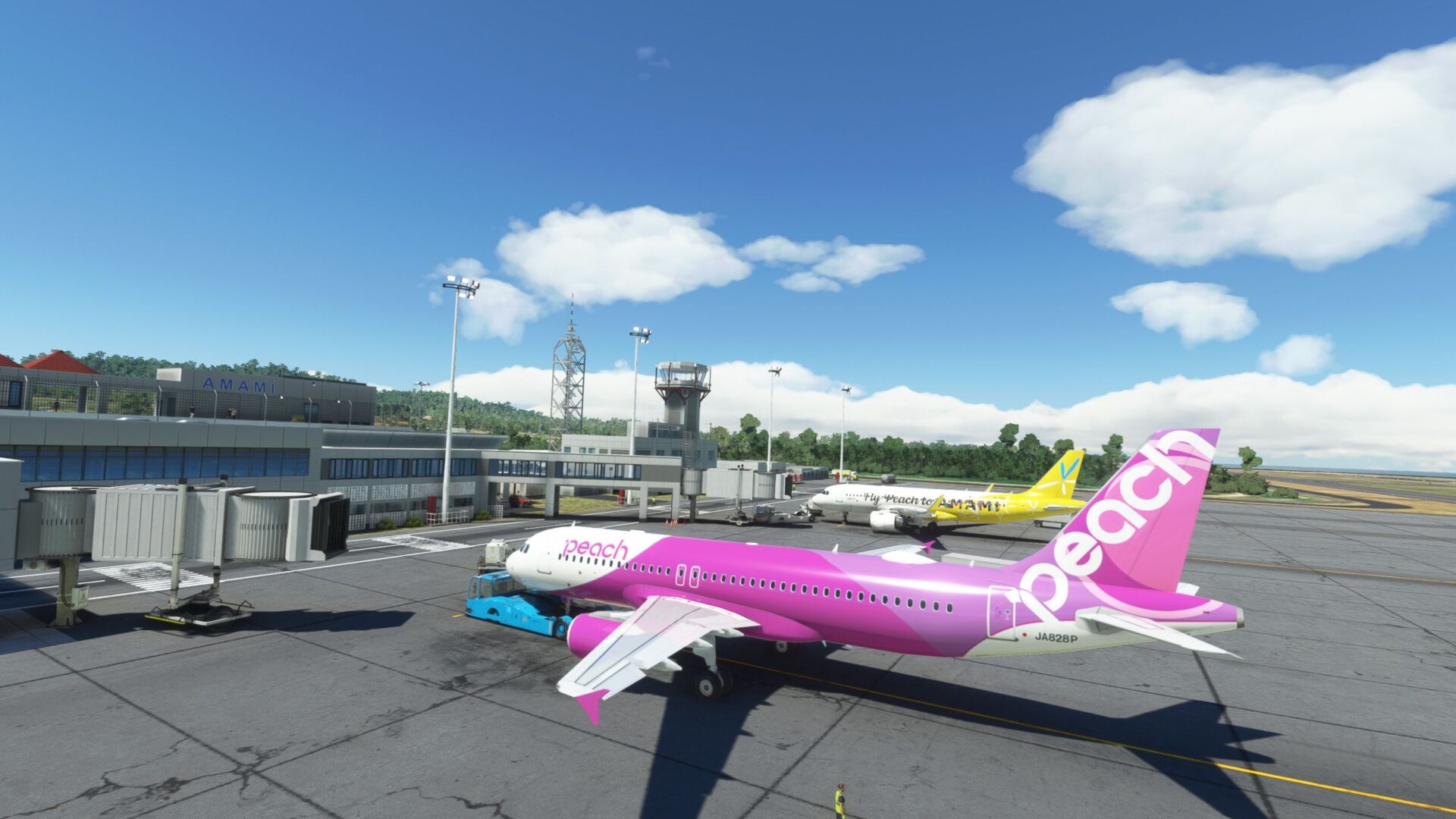