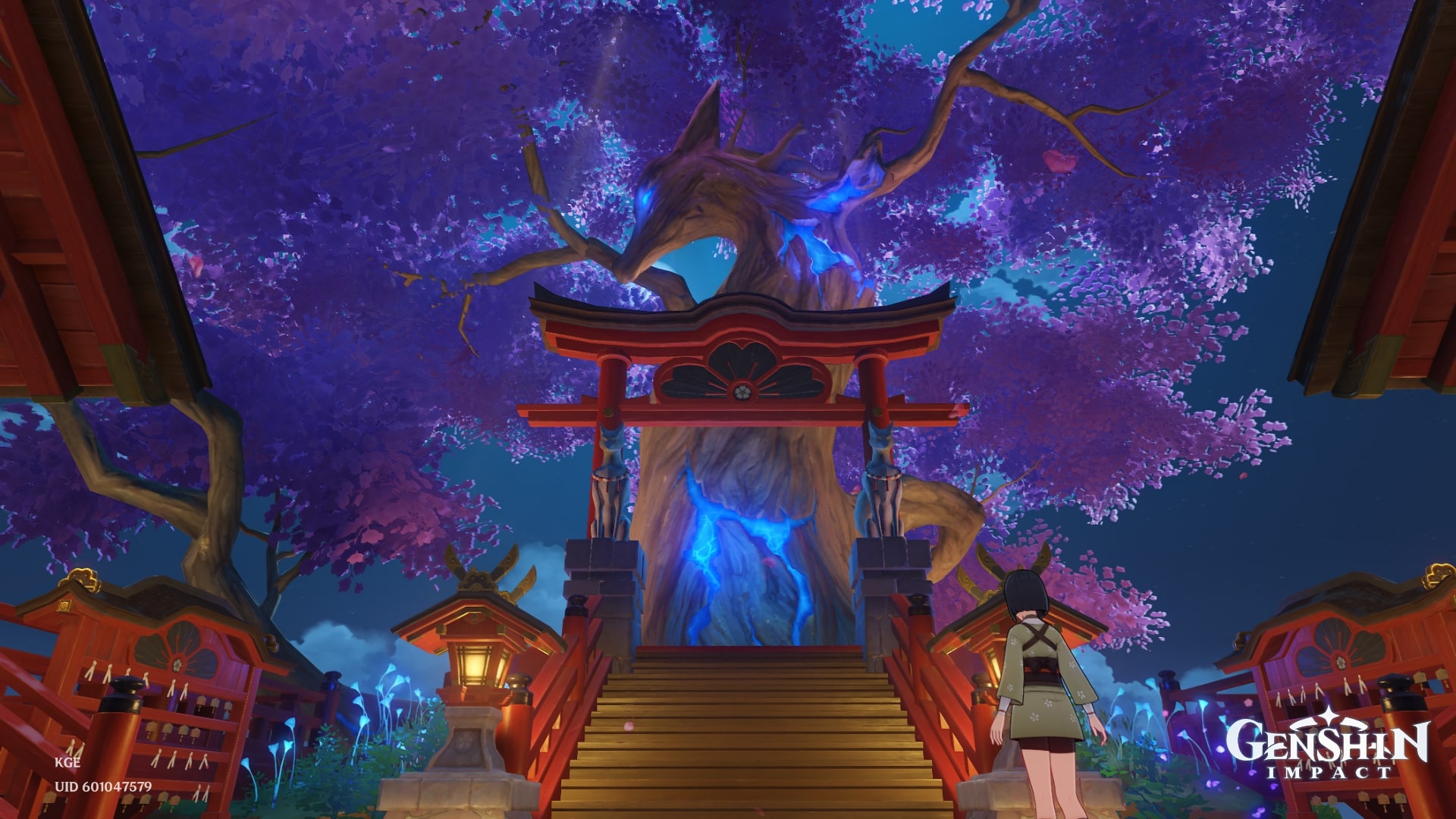 Genshin Impact contains a ton of quests that can be tricky to complete or figure out, and even more got added in the 2.0 update. If you need some pointers for the cleansing ritual, we can help. Here’s how to complete the Sacred Sakura Cleansing Ritual in Genshin Impact.

How to Complete the Sacred Sakura Cleansing Ritual in Genshin Impact

Once you obtain the Memento Lens and purify the first two shrines in the questline, the masked woman, Kazari, will ask you to complete the ritual by purifying three more shrines.

One of the Sacred Sakura Cleansing Ritual shrines can be accessed through the well-like structure in Araumi found here:

Once you drop down into the well, use the Memento Lens to scan the Earth Kitsune statuettes and reveal three switches. Press all three to drop through the floor and access the underground shrine area.

Use the Memento Lens on the Earth Kitsune Statuette nearby to make another Electrogranum plant appear after you drop. Summon an Electrogranum and walk through the nearby barrier.

After going through the nearby barrier, use an Electro attack on the large Kitsune statue to obtain a ward, just like you had to do in the questline that provided the Memento Lens.

With the ward, you’ll be able to purify the shrine and do another puzzle that’s exactly like the other ones you’ve been doing for the Sacred Sakura Cleansing Ritual questline.

The only difference here is that two shrines are missing from the puzzle. To make them appear, use the Memento Lens on the two Earth Kitsune statuettes located on the back wall to the left and right of the main shrine area. Here’s where they’re located, just in case you can’t find them:

The next part of the Sacred Sakura Cleansing Ritual can be found in the northern area of the Chinju Forest. You’ll need to speak to a stone statue, but it’ll be surrounded by enemies so prepare for a fight. You can find it here:

The statue, Ioroi, will then ask you to find three tanuki in the forest. Turn around and go straight back down the main stone path to find the first tanuki under an arch. It’ll disappear when you get close, but continue to follow it until a torch appears. Light the torch to be done with the first tanuki.

The second tanuki is further down the same stone path that you were just following, but it can be found to the left side of the path. Follow it just like the last one, then light three torches that appear in a stream to be done with this one.

The final tanuki is inside a barrel on an elevated rock that’s surrounded by Hilichurls. It should be near the stream. Follow the sound of Hilichurls. Get rid of the enemies then destroy the wooden barrel. Investigate the area where the barrel was and the tanuki will appear.

Return to Ioroi to complete this little game of hide-and-seek. The statue will reveal the location of the shrine. Go to the bottom of the marked cliff and stand in front of the tiny tanuki statue with a hat on it to reveal a hidden shrine area.

Use Ioroi’s Ward to start the purification ritual here. Change the symbols on the small shrines, just like the others you’ve done before.

The third and final step in the Sacred Sakura Cleansing Ritual shrine purification will take you to the Kamisato Estate. More specifically, the beach to the north of Kamisato Estate. Glide down the cliffside and land next to a Kitsune statue that is located right here on the map:

Use the Memento Lens on the glowing statuette found at that location to make a larger Kitsune statue appear. Then, use an Electro attack on it to obtain a Key-Shaped Ward.

Then, hop down and use the nearby Waverider Waypoint to summon a boat. Use it to head over to the northeast island pictured above. At the center of the island, there will be another glowing statuette surrounded by other Kitsune statues, so use the Memento Lens once again.

Doing this will teleport you underground. Summon the Electrogranum from the plant in front of you to avoid taking constant Electro damage in this area. And continue to summon a new one from a new plant as the Electrogranum disappear, to protect yourself.

This time, a Pyro and Electro Ochimusha will appear at the same time, so be careful after solving the puzzle. Defeat them both to finish the purification here.

It’s a long process, but that’s everything you need to know about how to complete the Sacred Sakura Cleansing Ritual in Genshin Impact. Check out our guide wiki for the game for more tips, tricks, and walkthroughs.