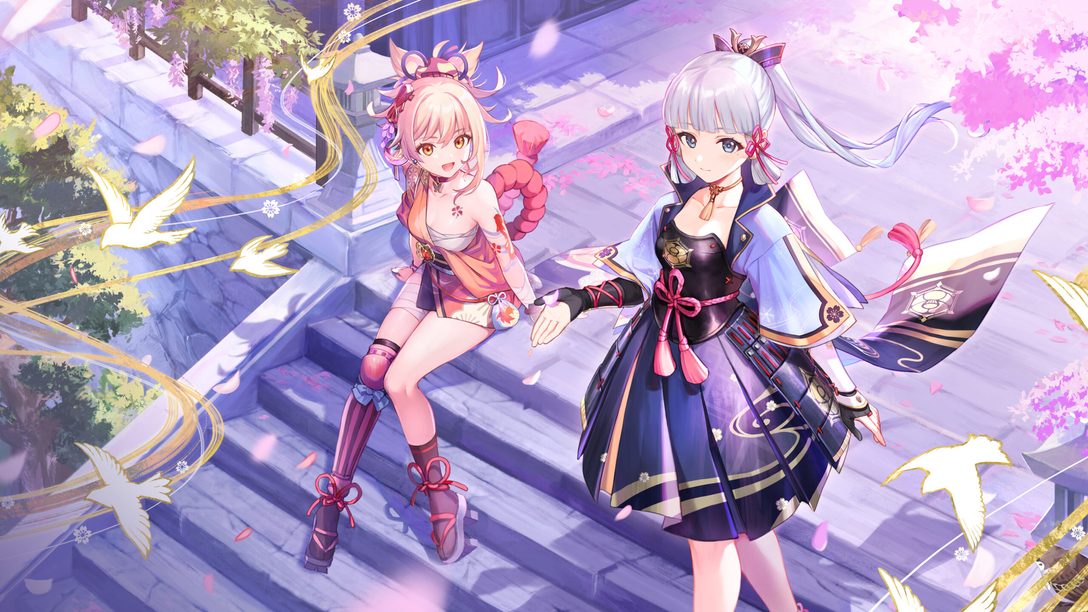 The Genshin Impact 2.0 reveal live stream took place not too long ago, and it provided plenty of details on what fans can expect to see in the update on July 21. This is a big one that’s adding a ton of new content, so here’s a rundown of everything we know so far about what’s coming in Genshin Impact 2.0.

Players have spent hours upon hours in Mondstadt, the city of freedom, and Liyue, the city of contracts. Genshin Impact 2.0 is now adding Inazuma, the nation of eternity.

Inazuma is an area that is made up of six main islands and a few sparse islets, all surrounded by water on all sides. It’s a region often clouded by thunderstorms and harsh winds, but it’s still full of landmarks like the Grand Narukami Shrine and Sacred Sakura, and the Tenshukaku where the Shogun resides (pictured above).

As you’d expect, there are also a number of secrets to find along Inazuma’s war-torn coastline and also within its underground ruins. And unlike previous regions, the puzzles in Inazuma don’t require you to have characters with certain powers in your party to complete them.

This wouldn’t be a major Genshin update without the addition of a few new playable characters. Genshin Impact 2.0 is adding Kamisato Ayaka, Yoimiya, and Sayu.

Ayaka is the daughter of the Yashiro Commission’s Kamisato Clan and she’s a five-star cryo sword user who works under the Shogun. Yoimiya is a five-star Pyro archer and a fireworks expert, earning herself the Queen of the Summer Festival nickname. Lastly, Sayu is a ninja and four-star claymore user who uses the power of Anemo to wield giant weapons.

Much like previous characters, you’ll get to know this trio through natural story progression as you complete new tasks. All three of these Inazuma residents will make their debut in the upcoming Archon quests for the new region. The Electro Archon Baal along with a few others are expected to be officially revealed as playable characters down the line as well.

With new playable characters come new threats to use them against. Genshin Impact 2.0 is adding plenty of new enemies to go along with the new region. These enemies include a Pyro Hypostasis, the Perpetual Mechanical Array, wandering samurai, and a whole new branch of the Fatui.

Longtime players should have an idea of what to expect with the new Hypostasis, but the other foes listed above should be a bit more unpredictable. The Perpetual Mechanical Array, along with a few other deadly machines, share similarities with the Ruin Guards found in Mondstadt and Liyue. And as you may have guessed, the samurai and Fatui will come at you with various elemental attacks.

Maguu Kenki will also return but as a world boss this time. This Inazuma boss fight will provide character level-up materials for your efforts.

Genshin Impact 2.0 won’t have you fighting the enemies mentioned above with old equipment. New weapons and artifacts are being added and they all fit the theme of the thunderstorm-covered region of Inazuma.

The 2.0 reveal stream revealed a variety of weapons that include a five-star bow called Thundering Pulse and a five-star sword called Mistsplitter Reforged. These are coming alongside the Hamayumi bow, Amenoma Kageuchi sword, Kitain Cross spear, Katsuragikiri Nagamasa claymore, and Hakushin Ring catalyst, which are all four-star weapons.

As for the artifacts, two new sets got shown off, as you can see above. The Emblem of Severed Fate set provides Energy Recharge for two pieces and increased Elemental Burst damage for four pieces. The Shimenawa’s Reminiscence set gives an ATK boost for two pieces and a Normal/Charged/Plunging attack damage increase at the cost of Energy.

Thunder Sojourn is a four-part event that will grant players a free Beidou as they explore Inazuma and take down various enemies. Stage of Wonders brings back the Theatre Mechanicus event from Liyue with some Inazuma twists. Phantom Flow has players take on challenges at different difficulties to gain Primogems, level-up materials, and more.

Ley Line Overflow causes Ley Lines to provide double the usual rewards for the regular amount of Resin up to three times per day. And finally, Lost Riches is another rerun event that’ll give players the chance to obtain a number of Mini Seelies.

The Serenitea Pot feature was introduced not too long ago, and it’s getting an update in Genshin Impact 2.0 with a gardening update.

Players will be able to use a new Seed Dispensary container given to them by Madame Ping in order to grow plants and make their Serenitea Pot feel a little more like home.

Planting seeds from the Seed Dispensary in the appropriate fields inside the Serenitea Pot will allow fully-grown plants to be harvested after a certain amount of time has passed.

Cross-saves are a feature that fans have been wondering about for some time now. MiHoYo accounts can already be connected between PC and the mobile version of the game, but Genshin Impact 2.0 is bringing that feature to PlayStation as well.

Players will be able to share saves and MiHoYo accounts across PC, PlayStation, iOS, and Android devices for the first time. This means that characters, items, and the like should all be shared across all platforms.

Not a lot of info has been given at this point outside of the confirmation, but it’s been stated that more details will be coming to explain exactly how cross-saves will work once the update goes live.

A few upgrades are coming for PlayStation players in the Genshin Impact 2.0 update in late July. In terms of visuals, character shading has been improved to show better shadow and lighting effects on characters. Colors and shadows should change and move more dynamically.

On the gameplay side, more haptic feedback features are being added as well for the PS5 DualSense. You’ll feel subtle vibrations in the controller when pulling a bow, running through plants in the woods, gliding through the air, and more.

That’s everything you need to know about what’s coming in the Genshin Impact 2.0 update later this month. Be sure to check out our guide wiki for the game if you’re looking for tips, tricks, and general guides.