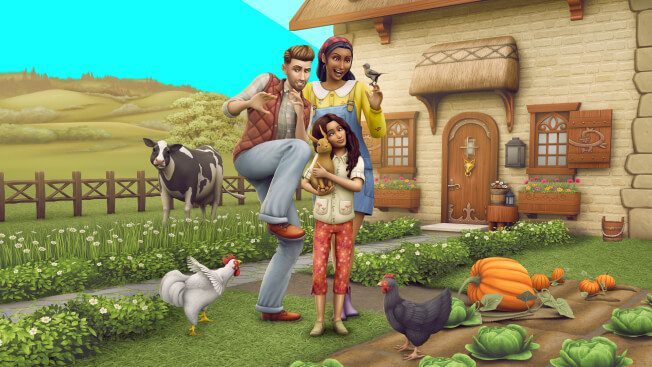 Simmers have spent many months (years, even) waiting for news of a pack related to farming, eagerly awaiting any news they could get their hands on regarding that particular update for the game. Thankfully, they won’t have to wait much longer, as just last month, The Sims 4 Cottage Living was revealed, presenting players with all sorts of new features and a more lore-heavy pack than usual.

Whether it’s farming and trying to create the best giant crops or taking care of your own chickens or cows, this new expansion offers a lot of unique things, especially when compared to previous releases (even those of the previous Sims titles). We have compiled what we know so far and have a Cottage Living preview ready for you here.

This Sims 4 Cottage Living preview will dive right into what makes the new pack so special and what players can expect upon July 22’s release date.

When it comes to animals, Cottage Living will have a lot to offer. There won’t be any horses like in The Sims 3, but Simmers will instead be able to purchase chickens, cows, and llamas. They will need to purchase a shed for the barn animals or a coop for the chickens.

After that, players will be able to simply click on the shed or the coop and purchase the animals of their choice. To start, you can get a couple of different variations for each animal. As for chickens, you can also buy roosters at the coop.

Players will be able to feed special treats to their cows and llamas to receive different colored wool or flavored milk, with rainbow treats creating rainbow coloring. Like in real life, Llamas will also be feisty and humorous, as they’re able to spit and express some serious sass. There will be social interactions for all of the farm animals (you can hug your cows!) and even a secret cow world. Not so secret now, brown cow!

Just like the treats and the shed animals, players can feed special food to their chickens so that they produce special eggs. We’re talking golden eggs, golden chickens, obsidian eggs, and EVIL chickens. We know what you’re all wondering, and yes, the new death will be chicken-induced. If you manage to anger your chickens enough, you will be in for some death by chicken. As if they weren’t scary enough in real life.

Alongside the farm animals, fans can also expect to see or interact with wild animals like birds, foxes, and rabbits. These differences with these animals, however, is that they are free-spirited and are not like other pets, meaning you’ll only be able to interact with them in the wild.

There is still plenty to do with them, though, as animals like the rabbits are super cute and super helpful if you befriend them enough. They will help your Sims out and even give them gifts after a while. When your Sim has a good enough relationship with a rabbit, you will even be able to place a wild rabbit home on your lot and have the little guy live there by your home.

Birds will come in flocks rather than as single birds, so your Sim will be building their relationship with not just one bird but all of them. Players can build that relationship by giving the birds gifts (certain animals will have certain favorite gifts, so be sure to pay attention to that) and singing with them. However, if your Sim is bad at singing, the birds will retaliate by defecating on your Sim (yes, poop). If they’re good, your Sim will get strong positive buffs instead.

The final animal to cover is the fox. These will not be the foxes your Sims are used to from the Cats & Dogs. They are more feral, and they will try and go for your chickens if possible. Thankfully, the llamas can protect them by spitting on the foxes, and the bunnies will also ward them off. All of the animals will die of old age depending on how you set your lifespans in the settings just like Sims, and child Sims will be able to run every interaction that adults can with the animals. Animals are free to reject any interactions.

Did we mention in our Cottage Living preview that you can dress your animals up? Cottage Living is even adding a lactose intolerant trait so our Sims can really bring our struggles to life (some of us really like cheese, but not all of us should be eating it). If your Sims have the new animal enthusiast trait, they will even be able to play instruments for animals.

Alongside all of these animal activities, Cottage Living also allows Sims to cross-stitch, cook, and do a handful of other activities together. Children will even be able to help the adults out to make for a more realistic experience, serving the added benefit of developing their mental skill while also just being adorable.

When it comes to new aspirations, there will be one called “Country Caretaker” but no new lot traits. Instead, there will be lots of challenges, including bringing wild foxes to the lot or improving recipes for cooking. There will also be a new NPC known as the “Creature Keeper” who lives in one of the new neighborhoods, The Bramblewood. He cares for wild animals and is a good way to purchase animal clothing or trade ingredients. He can even offer help with errands.

The Bramblewood itself will include a National Park, a snail maze with a cute snail known as Sophie (your Sims can take selfies with her and give gifts!), wild plants, and mushrooms. Finchwick, another neighborhood, will also host a weekly fair, featuring various competitions for your Sims to compete in. From overgrown crops to animals, your Sim is bound to find something to enter into.

Last but not least, The Village, another new area, will have a pub owned by the Scott family and a garden shop run by the notoriously angry Crumplebottoms, named Agnes. If your Sim tries to flirt with her, they will be met by the wrath of her purse. This area also allows your Sims to swim in the river and tend to a local garden, making for some fun new hobbies and activities.

Farming is one of the things Simmers are likely looking forward to most with Cottage Living– gardening has always been in The Sims, but this will be different. There is a new garden patch where your Sims can purchase oversized crop seeds and plant them there. Your Sims will get more than one plant per patch, depending on fertilizers and care. They will either produce four small crops, two medium crops, or one single version of a large crop. Your Sims can then use these for cooking in recipes, or they can enter them into competitions.

From farming to caring for animals, this pack seems to have it all. It will definitely bring your Sims together with the new self-sufficient system where Sims will be able to live entirely off of their land and work with each other to cook and tend to crops. They can also always take their picnic basket anywhere in the world to have a meal while staying in touch with nature.

That’s all we know about the new pack now, but we hope that this Cottage Living preview has helped you consider it more. If you want to see more about the upcoming expansion, be sure to check out the reveal trailer here and the gameplay trailer here.