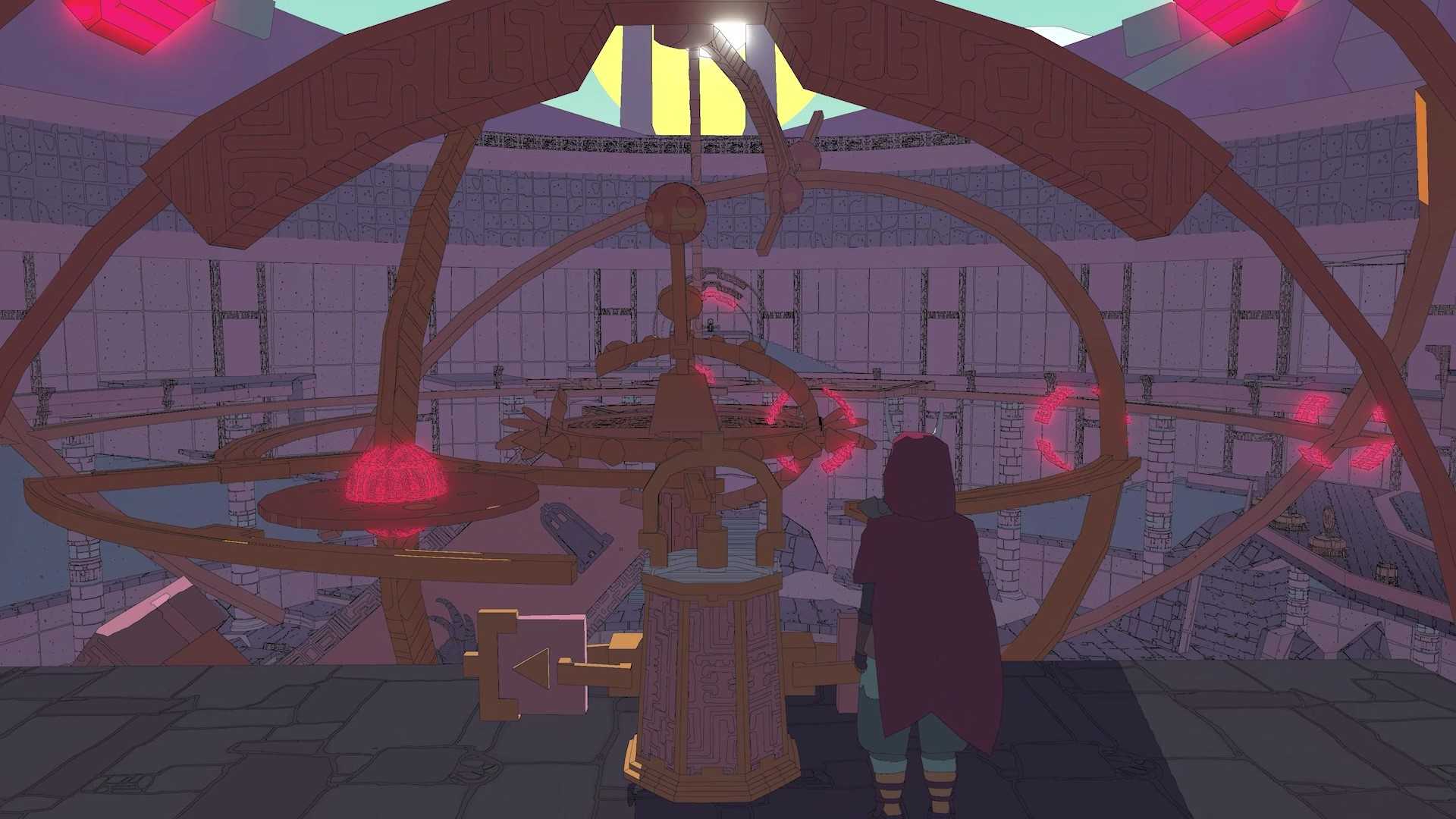 As soon as I booted up the Sable demo on my PC, I was enraptured by its world and atmosphere.

The game’s Moebius-inspired graphics, calming soundtrack, and engrossing colors were more than enough to sell me on diving deep into this hour-long preview. What really hooked me, though, was how much the game felt like Breath of the Wild.

The demo starts by throwing you into the shoes of Sable, the titular protagonist, as she navigates a strange ruin. There isn’t any clear context as to why she is here or what her objective is, so I just started to explore when I was given control of her.

After a bit of marveling at the unique architecture and art style, I ventured outside of the broken-down desert temple toward a pillar of smoke.

This smoke lead me to the Ibexii settlement that Sable calls home. After some conversing with a girl who loves bugs and a sweet old lady, I eventually learned that it is time for our main character to embark on a pilgrimage to figure out who she wants to become.

The first step in that pilgrimage is to unlock a power known as Gliding from the temple over the hill. This ability lets Sable do just as its name suggests, allowing her to glide from any height at a stable rate while covered in a magical sphere.

To get to this, I was only given a general direction and objective. This felt reminiscent of freely exploring Hyrule as Link in Breath of the Wild, as I had a guide of what I was supposed to do, but not a strict, linear path.

As such, I explored the area a little bit beforehand, completing a few side quests and getting to know the town and its people before heading off on my journey.

Once I arrived at the temple, I began to free climb with a stamina bar until I found and unlocked the Gliding ability inside the temple. Once I could glide, navigation became much easier, letting Sable fall safely and slowing her descent to make jumping from spot to spot easier.

This combination of climbing and gliding once again made me feel like I was playing Breath of the Wild. Both of these mechanics were core aspects of my enjoyment when playing the beloved 2018 Zelda title, helping make navigating Hyrule much more enjoyable and manageable.

Thanks to this feeling, I simply couldn’t shake the need to go off and investigate Sable’s world right from the get-go. This isn’t entirely surprising, as the developers have said that the entire game will focus on our young protagonist’s adventure, placing a heavy focus on exploration.

That exploration is exactly what I loved about Breath of the Wild. It rewarded you for experimenting and trying new things. Examples include allowing players to fight the final boss immediately, or even implementing game mechanics that players are still finding out about to this day.

Now, that isn’t to say that this Sable demo is just as freeform. It still has limits on where you can go and what you can do. However, the bits that I did play made the game feel like it’s going to let the players guide the adventure instead of making things completely linear.

While I was thoroughly enjoying my adventure, the bike did not feel as good as I’d hoped it would in the demo. The short experience I had with the vehicle’s movement felt unnecessarily slow and heavy, which is the polar opposite of how I imagined gliding across the desert.

If I was stuck on this bike the entire time, I’d definitely be frustrated, because going from place to place would slow down the pace of the game considerably. Thankfully, the clunkiness of the bike seems intentional, since it is revealed that Sable needs to create her own.

Finding parts to create the bike is actually what makes up the majority of the demo, as I was given three items to find at three different spots on the map. This sends Sable to three unique locations in order to find a Control Panel, Power Supply, and Atomic Calibrator.

This quest also introduces the Navigator — a helpful tool that lets Sable mark items on her map. Once marked, each spot can be quick-viewed with the touch of a button using the game’s compass.

Now, instead of having to open a window to check the map every time I got lost, all I had to do was press a button to immediately bring up the compass. And sure, map markers are in pretty much every game, but the way the Navigator is used in Sable adds to the game’s atmosphere and world.

Opening up the Navigator and marking landmarks so that you’ll be able to locate them with just a quick tap of your compass makes it feel like the ultimate adventure. It felt like I was planning my own road trip using an old-school map, marking down my course and route as I went, without a GPS.

Much to my dismay, Sable’s gameplay demo actually ends after all the parts are collected. That not only means that I didn’t get to experience how the new bike felt compared to the old one, but also that I’m going to have to wait until Sept. 23 to find out more about this game’s fantastical world.

In the end, though, if the game does turn out to be an exploration-focused version of Breath of the Wild, I am more than happy to wait as long as necessary.