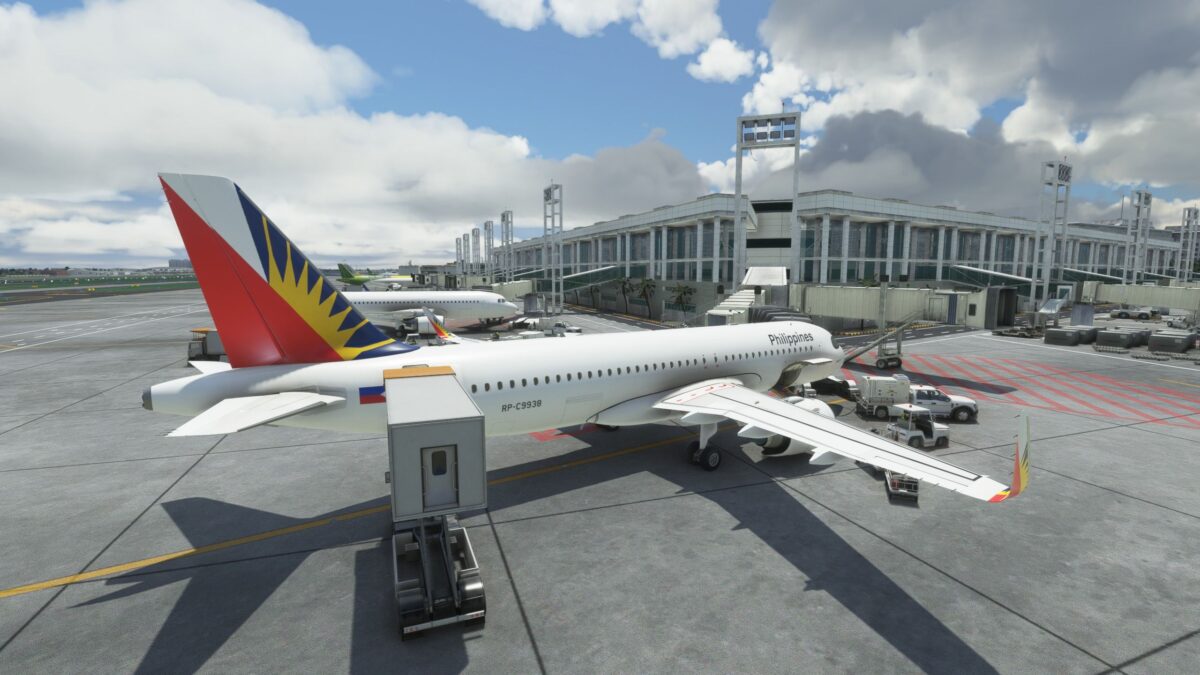 Considering that it’s among the top-20 busiest airports in Asia, it’s certainly a great destination for those who enjoy flying airliners and cargo. It also includes general aviation, business, and military operations, so there’s something for everyone.

It’s one of the few airports of this size and scope deeply embedded into the urban area of a capital city, which means really scenic approaches with Manila’s skyline in full view.

Unfortunately, the default Microsoft Flight Simulator render of the city isn’t great. There are no specific landmarks and the real-world houses are often so packed t together that the procedural placement simply can’t deal with it, leaving large uncovered gaps. I really hope that Cloudsurf will create a City Pack to complement the airport as they did for their excellent Singapore.

The airport can be purchased on Orbx Direct for approximately $19 and benefits from installation and updates on the Steam-like Orbx Central client, making all operations a breeze.

If you’d like to see in detail what the airport looks like, the first video above showcases an ILS approach and landing on runway 06, while the second below provides a detailed flyover of the whole area in Microsoft Flight Simulator, both airside and landside.

SIDs, and STARs work correctly, as do most of the approaches, but the ILS glideslope on Runway 6 appears to be a bit higher and shallower than it should be. The ILS on runway 24 is fine.

All taxiways are correctly labeled in the configuration, which means that Microsoft Flight Simulator’s default ATC will provide correct guidance to the runways. There is a configuration issue that prevents requesting ground to taxi to the gate, with only parking options being available. That being said, the developers are aware of both the ILS and ATC issues and have mentioned they’ll be solved with the next update.

As for visual approaches, the PAPI lights are correctly calibrated and will guide you to the touchdown zones without any issue (which is certainly helpful due to the problem on the ILS 6 approach). On the other hand, according to the charts and recent visual references I could find, not all windsocks are placed correctly.

The work done on runways, taxiways, and aprons is mostly very good, with high-quality textures, predominantly correct markings, and a proficient reproduction of the patchwork of tarmac and concrete.

On the other hand, the concrete part on the centerline of runway 13 appears to be too wide and the displaced threshold appears to be slightly shorter than what the charts and visual reference I could find appear to indicate. A few holding position markings on the tarmac and no entry signs are also missing, and the same can be said about the aircraft labels on the stop reference bars at the gates.

Another small issue is that a military helicopter apron near the threshold of runway 24 hasn’t been textured and has been left with the blurry satellite imagery only, which isn’t too fetching, especially since the helicopters are literally painted on the ground.

The terminals are the true star of this airport, and one of the things that make it really stand out among the many available for Microsoft Flight Simulator. All the terminals are beautifully modeled and textured, with just the right amount of weathering, and terminals 2 and 3 featuring some of the best interiors I’ve seen as of late.

The jetways are also very nice and detailed, with the only small issue being the external staircases that glitch into the ground as the jetways lean lower to attach with smaller aircraft. Said attachment, by the way, is practically flawless, which is always great to see.

The landside parts of the terminals are also very good, showing that plenty of work has been done in detailing them. While you won’t see it during normal operations, this certainly shows that the developers are passionate about reproducing the airport’s atmosphere.

Other relevant buildings like the towers, the fire station, the hangars, the fuel depot, and the cargo areas are also modeled in great detail, with plenty to see and explore. The Lufthansa Technik hangars are certainly another highlight of the airport, even if the construction for an additional one currently going on in the real world is not represented.

There are plenty of adequate-quality static aircraft, but they’re wisely placed out of the way in satellite parking aprons where they aren’t in the way of operations. There are also a couple of military C-130s on the appropriate apron, but I’d have appreciated the addition of the helicopters mentioned above.

The placement of additional equipment and clutter on the aprons is really good, definitely helping the airport feel lively and realistic. On the other hand, antennas and equipment on the southern side of runway 06/24 is missing, including the rather prominent VOR antenna.

A lot of attention has gone into modeling many buildings outside of the airport to properly reproduce its surroundings. I always appreciate this, because many developers stop at the borders of the airport, with the result that the view during take-off and landing isn’t all that similar to the real world.

We see plenty of warehouses, hotels, toll booths, commercial billboards adding flavor (even if the textures on some appear strangely mirrored), and known landmarks like the Shrine of Saint Therese of the Child Jesus and the El Shaddai International House Of Prayer.

A couple of additions that I’d like to see in possible future updates are the static aircraft on display at the Philippine Air Force Aerospace Museum and the Oyster Plaza Hotel. While the latter is a bit further away from the airport, it has a massive “Welcome Oyster Plaza Hotel” writing on the roof which is impossible to miss while landing on runway 6 in the real world. It’s quite the iconic sight as you arrive at the airport.

The airport looks great in the rain, even if the droplets won’t interact with roofs and windows, meaning that it’ll rain inside. That being said, this kind of physical interaction is still very rare nowadays. You can consider this a minor nitpick. Snow coverage isn’t great, but that’s irrelevant. It doesn’t snow in Manila.

Night Lighting is mostly excellent, with great illumination nearly across the board, including runways and taxi lights, floodlights on the aprons, and the interiors of the terminals. Only terminal 1, which doesn’t have an interior, seems a bit dull at night.

A few of the buildings near the threshold of runway 6 lack any lighting, which I’d chalk to an oversight. On the other hand, most buildings are naturally lit as they should be. The folks at Cloudsurf Asia Simulations didn’t take shortcuts by making concrete textures artificially bright, which many developers do and it’s a rather serious immersion breaker.

In terms In terms of performance, the developers did an excellent optimization job. On my PC (RTX 3070, Ryzen 9 3900x, 32 GB RAM) at 1440p resolution and Ultra detail settings, I lose only 1-3 FPS compared to the default scenery in Microsoft Flight Simulator. You can see a comparison above.

This is pretty amazing considering the extreme difference between the default scenery and the add-on, which adds tons of details across the board. It also shows that there’s still plenty of overhead if the developers want to add some of the missing elements I mentioned above.

Ultimately, while Cloudsurf’s Manila Airport isn’t completely perfect, and a few flaws can be found here and there (most of which I’m quite positive will be addressed going forward) it’s still a really beautiful portrayal of RPLL under most points of view.

If you like flying in South-East Asia in Microsoft Flight Simulator, this is pretty much a must-have, even more so considering that the Philippines enjoy a rich community of developers that have created many nice airports both on the payware and freeware scenes. Manila is the perfect centerpiece for that. 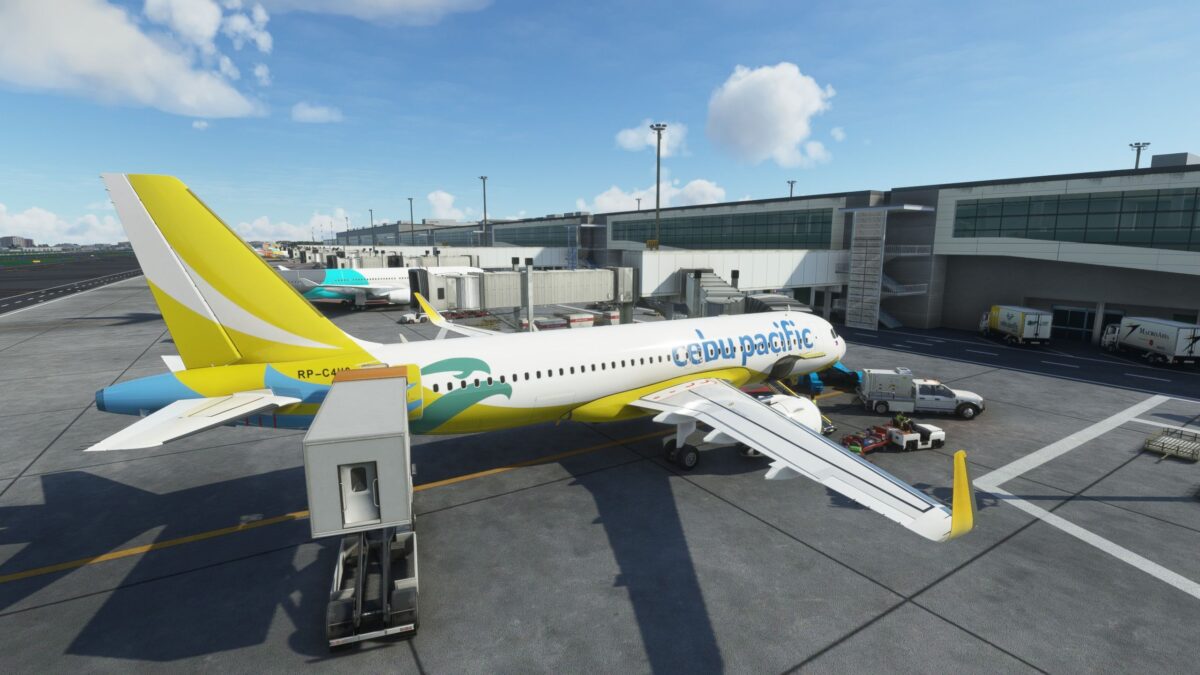