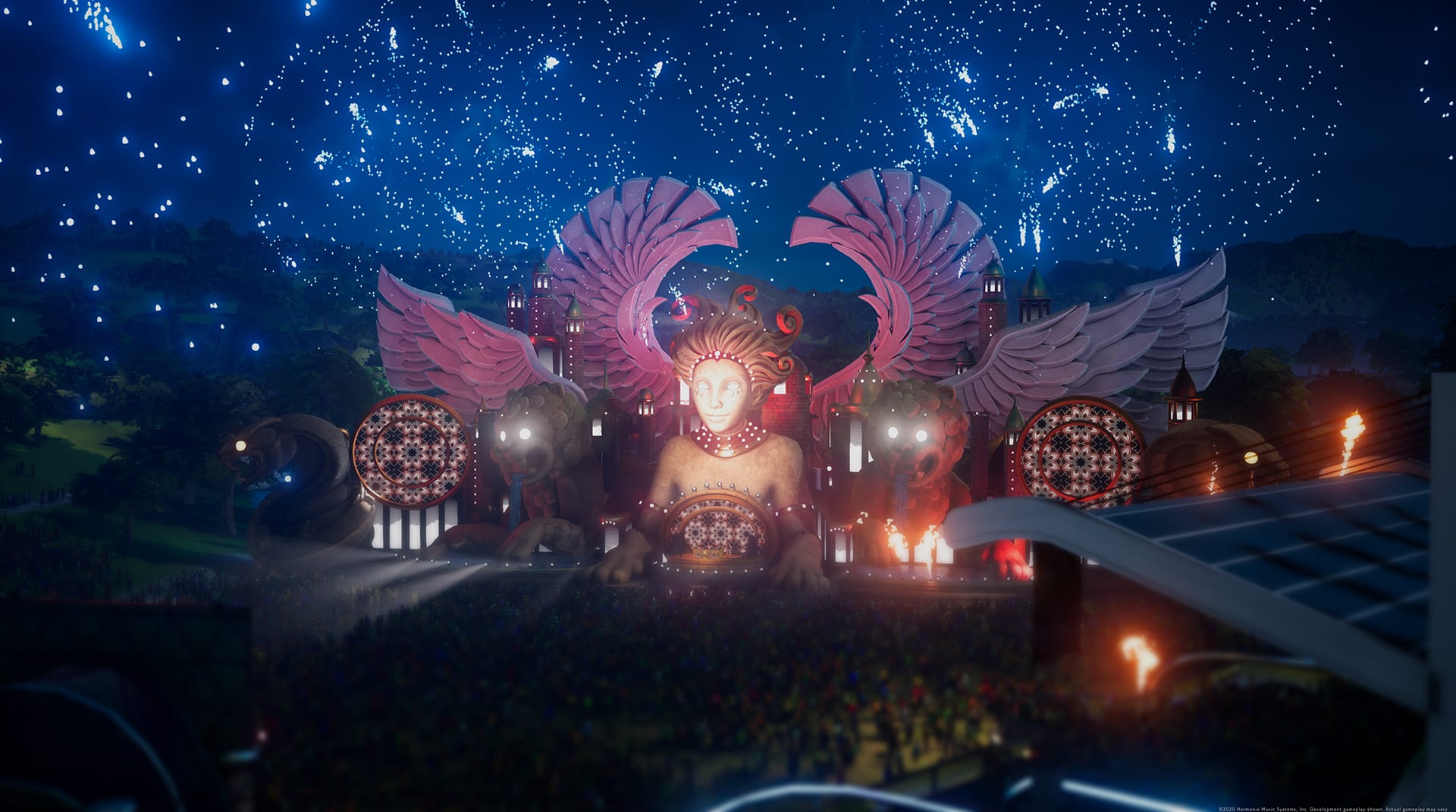 Harmonix’s Dropmix was a weird hybrid of board game and music game. Using physical cards, you’d mix elements of popular music together to create cool mash-ups. It was fun, but there wasn’t much to it. Now, Harmonix has integrated that base idea in Fuser, expanding it to make something that’s infinitely more engaging than its card-focused origin.

What they’ve done is make the gameplay more rhythm-based. Rather than just choosing the drums, vocals, keyboards, or guitar track you want and letting the game do it for you, you need to time the drops of new discs correctly on pickup or downbeat to make the crowd happy.

Whether it be by looking at the mix’s overarching timescale above the decks or each tracks individual information, you need to time your actions carefully to keep the beats flowing nicely.

Then, throughout the campaign, you’re introduced to various other actions and mix possibilities. You can cue discs, drop multiple at a time, play instruments and loop them into the mix, change the key, add effects to individual discs, and much more.

By the time you’ve reached the back end of the campaign, you’ve got an incredible amount to juggle beyond simply making a mix that sounds decent.

With so much to do, spread over a small number of buttons, you’d expect everything to get overwhelming and confusing, but it doesn’t.

You’re given time to do the more complex inputs and everything is intuitive enough that you don’t get lost under a pile of discs and screaming festival-goers.

Remember the rush of fighting to play the right notes in a tough Guitar Hero song? That feeling pops up frequently in Fuser too, but you’ve got many more plates to spin and tasks to keep an eye on beyond simply keeping the music playing.

When you’ve produced a mix that sounds great (and trust me, you can make some absolute abominations), you’re nailing all the tasks, and racking up the score, Fuser is a joy.

When you’re bopping along to a beat and it’s given a chance to breathe, those moments are some of the best you’ll have in gaming this year. Just as your favorite music can, it’ll put a massive grin on your face.

Fuser’s ability to do that is in large part down to the excellent technology that puts the musical elements together. I’m not even nearly smart enough to tell you how it works, but the way Fuser seamlessly slips each disc into an ongoing mix is like magic.

While you can make mixes that sound bad, you’ll never make one that sounds downright wrong. The beat will be there, but certain tracks will clash.

Fuser’s campaign is the perfect framework for that technology. As you make your way through six stages, working hard to become the headliner, you’re slowly taught how everything works and when you should use each ability.

At the start, you’ll be introduced to the basics of dropping discs at the right time, before each DJ mentor introduces something else new. Then, you’re given tasks based on the new skill that award you XP upon completion (you earn stars to level up and unlock new cosmetics and tracks), audience members will throw specific requests at you to complete in a short period of time, and you’ll need to keep switching up the mix to fill up the audience’s happiness/engagement meter.

Sometimes it’s frustrating that you’re forced to change up the mix so regularly since it stops you from being able to vibe along to a particularly good mash-up, but you can save them for later to bring them back in Freestyle mode.

It also lets Fuser’s full tracklist breathe. With everything from 80s rock to modern dance music, it’s certainly broad and has a great variety of beats and sounds. I’d have loved a higher percentage of dance music to feel more like a DJ, but I understand why the ‘something for everyone’ approach is best.

With so much to learn, the campaign has to act as a long tutorial, giving you the chance to get comfortable with each ability before moving on.

While that’s great, it does leave Fuser without a single-player mode that really takes advantage of everything you’ve learned. With you still learning new ways to drop In Da Club into a mix as you enter the last chapter of the campaign, you’re barely given the chance to experiment.

I’d have loved an additional single-player mode that’s between the freedom of Freestyle mode and the rigidness of the campaign. One asks nothing of you and the other holds your hand the whole way. The campaign is excellent as it opens up in the later stages, but a mode based on score alone would be welcome.

The online battle mode is complex and takes a lot of the focus away from the music, putting all the emphasis on your quick fingers and mixing ability. It’s the true ‘game’ part of Fuser.

If you’ve really got to grips with everything the campaign taught you, it’ll be the place to live your DJ’ing dreams, but it’s very intimidating for newbies or those still learning. If you’re slow on the draw or haven’t learned what tactics are best, you’ll lose, plain and simple.

Even if a better selection of modes would be welcome, Fuser is often a joy to play and potentially the future of rhythm games. Tapping your feet along to a great mix was always going to be great, but Harmonix has developed the Dropmix idea into a game that’s deeper, more engaging, and a lot of fun.