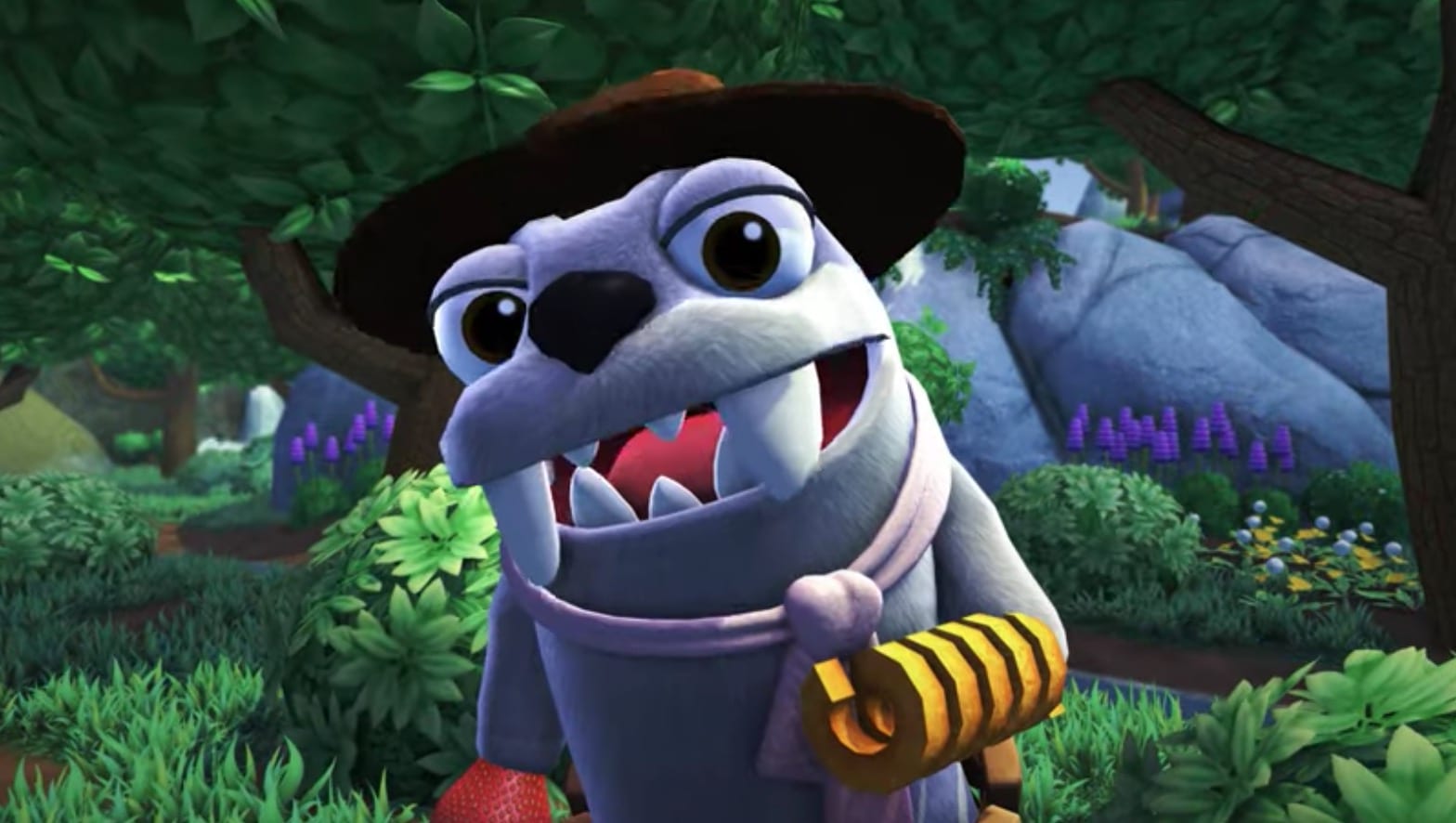 I have to admit something. I was very captivated and intrigued by Bugsnax as soon as the first trailers were released. Especially once the theme song by Kero Kero Bonito reached my earholes –it’s so dang catchy, y’all, and the jingle still has not escaped my brain. Bugsnax, as a game, though, is incredibly strange and hard to explain, but I’ll do my best.

After being invited to Snaktooth Island by an intrepid explorer for a big scoop of an interview, your character finds themselves in the middle of some trouble. The famous explorer has gone missing, and it’s up to you to find out what happened by finding and interviewing all members of the island’s town.

You spend the majority of your time in Bugsnax capturing these half-snack half-bug creatures named Bugsnax, and they’re very delicious. Each of them are morphed and spliced like some sort of mad science experiment. You’ll find a butterfly that’s half cheese puff or a praying mantis that’s also a delectable burrito.

And it’s a little bit like Pokemon Snap, in which there are different methods to catch each Bug Snak, and these methods involve several different tools that are obtained over the course of the story. At first, you’ll just have a sauce launcher with ketchup or ranch dressing, and then you eventually end up with a hamster ball that can be used to guide creatures into your Snak Trap.

There are different locales to explore with various themes like a beach level and a desert level, and each area has Bugsnax that would make sense for them to be there. You walk into a forest level, and you’ll see tons of Snaks just hanging out, and by using a camera, you can scan them to unveil info about their likes and dislikes.

So, for example, if you see a Cinnasnail (half snail half cinnamon bun, obviously) crawling high up on the wall, you can scan it to see what it likes. If it likes chocolate, you can shoot chocolate sauce from your launcher, then catch it with a trap.

Some creatures are easier than others to catch, and that’s where most of the fun comes into play in Bugsnax. Figuring out how to catch the rarer Bugsnax and playing around with the environments was really entertaining and delightful. I loved the thrill of seeing an undiscovered Snak and immediately thinking of ways to get it into my trap.

However, some of these damn Bugsnax can be very hard to catch and requires you to really think about all of the items nearby you that you can use as tools. I found myself stuck a lot of the time because I had no clue how to catch a specific Snak. I literally had to ask other people who were also playing the game because the frustration would kick in constantly the closer I was to the end of the game, and I lost all patience.

Bugsnax would keep bothering me and running into me while I was trying to catch other creatures, and it’s probably the most irritating thing to happen. This baked potato crab creature or any other aggressive Snak will charge at you when you get near them, and you’ll keep getting knocked into the air until you deal with the problem.

Catching the Bugsnax can get a little janky too, due to the physics system in place here. There were several occasions when I was trying to catch a troublesome Snak, and I felt as If I was doing something wrong but managed to get it anyway. You can get lucky and just catch stuff by chance.

And Bugsnax isn’t meant to be a challenging game, I think. It’s more that you need to think a certain way to catch everything, and it really pushes you to experiment and see what happens, whether you fail or not.

It’s a little sandbox-y in that there are so many different methods of capturing the Bugsnax. Also, there’s about 100 to capture, and you don’t need to catch them all to finish the game, in case you were wondering.

The main cast of characters that you interact with for the entire game will ask you to feed them specific Bugsnax, or they might need you to go with them to complete an objective. These side quests don’t reward you with anything, but you can learn more about the characters, like their ambitions and personality traits or their hopes and dreams.

And speaking on the characters and writing, the voice acting is pretty great to listen to, and the dialogue is very hip and modern and never takes itself too seriously. I found myself chuckling out loud a couple of times due to how ridiculous things can get and how these characters interact with each other.

It gets even more ridiculous when you start changing the appearance of their body parts and limbs by feeding them Bugsnax. You’ll just be having a casual conversation with someone who has a pickle for a nose, a watermelon for a hat, or a banana as an arm. It’s wild.

You see, these characters don’t really like each other. You’re completing tasks for them so that they can all gather back into town and be forced to get along so that they can team up to find out what happened to Lizbert, the explorer.

They all have such great personalities and have so much depth, and you really get attached to them throughout the story, especially the first few that you meet that have been by your side since day one. I also want to give a shoutout the LGBTQ+ representation because there’s a lot of that in Bugsnax, and it’s nice to see. I can’t tell you how many times I oohed and ahhed because of the multiple same-sex relationships that are front and center in the story –we love to see it.

The overarching narrative in Bugsnax is pretty simple in the first two-thirds of the game, with you just capturing Snaks to get the townspeople to come back and find out what happened to Lizbert.

And I say it’s basic in the first two-thirds simple because the final act is –without spoiling anything– is just batshit crazy and was not expected. That’s really that can be said about that because we want to avoid spoilers for this review, but it’s certainly something worth seeing play out.

It really just goes places and is something that will probably stick with me for a while. It’s an indie title that really isn’t afraid of taking chances with its story-telling and gameplay, and there’s honestly not much to compare it to.

I did face some technical issues while playing Bugsnax on PS4, though. Loading times were very long when transitioning from area to area, which happens a lot; the frame-rate can dip when the screen gets busy with characters or lots of Bugsnax. And there were times when the camera would suddenly freak out during dialog sequences or cutscenes. This didn’t impact the gameplay experience too much, though, and one would hope the PS5/PC version will run much smoother.

It’s a unique and comical adventure that feels like a fresh breath of air amidst all of the AAA next-gen titles out coming out. It can get frustrating at times, and the game doesn’t do the best job at signposting, leading to players being lost at times, which is something to consider.

Bugsnax is an odd and wacky experience that’ll be remembered as the black swan of the PS5 launch lineup, in the best way possible. It highlights PlayStation’s commitment to having a diverse catalog of games at the PS5 launch, and with Bugsnax being free on PS Plus for PS5 players at launch, there’s no reason not to try it if you’re a subscriber.