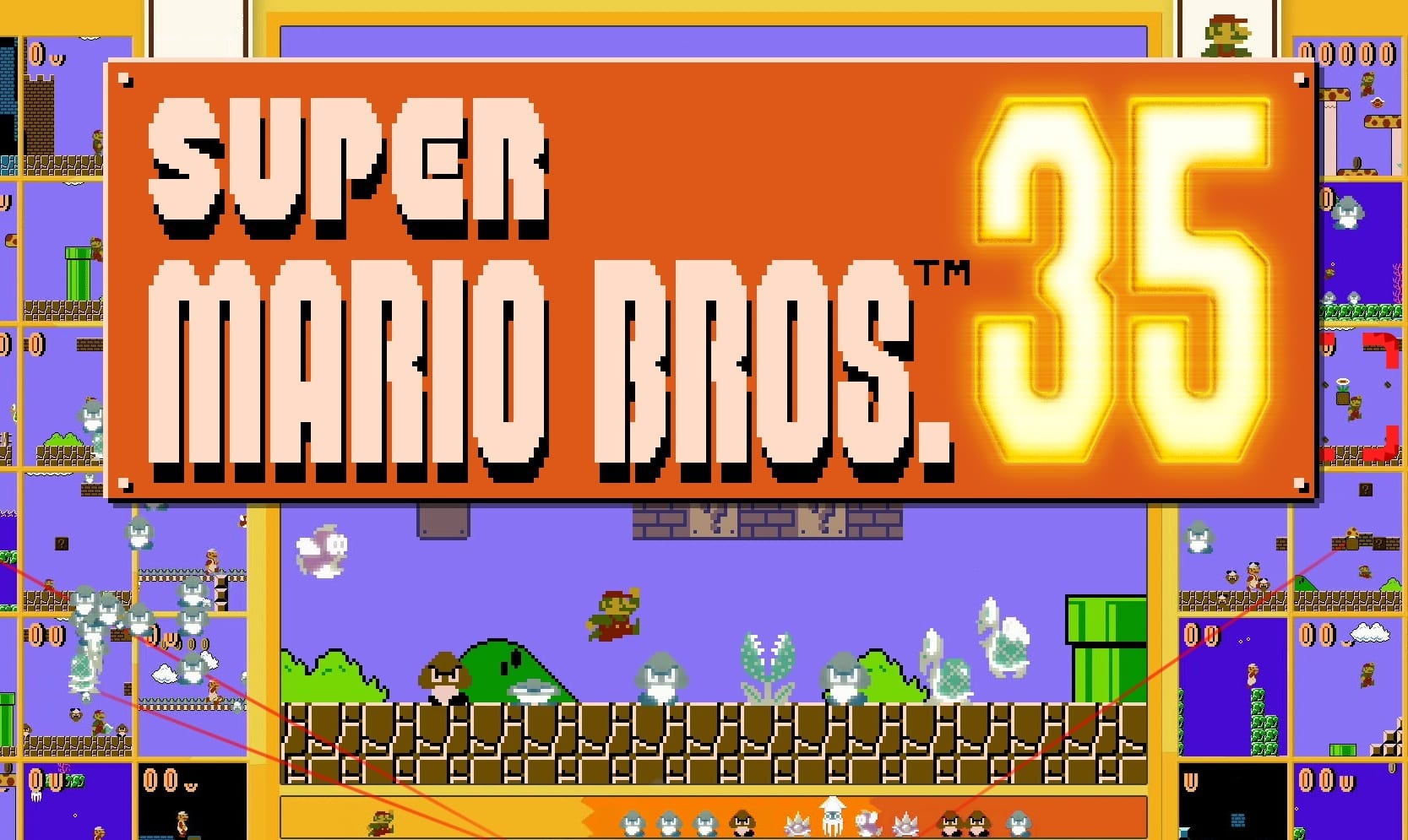 Battle royales have been taking the gaming world by storm over the past few years. While many are centered around first- or third-person shooters, like Fortnite or Apex Legends, some companies have been thinking outside of the box to create new experiences within this genre.

Now, Nintendo is joining in the trend with its new game, Super Mario Bros. 35.

Super Mario Bros. 35 mixes the fun platforming of a 2D Mario game with the frantic rush of competing with a group of other players, and it works a lot better than you’d expect.

It’s a twist on the classic version of Super Mario Bros., and as the name suggests, 35 people play through levels simultaneously to try and be the last one surviving. Players must defeat enemies to earn extra time while collecting coins to exchange for power-ups.

It’s quite similar to Nintendo’s Tetris 99, in which players can attack each other in order to make it harder for them to survive. This is done by sending extra enemies to their levels.

Players drop out of the competition when they are defeated by an enemy or run out of time, and the last person remaining is declared the winner.

It’s simple in nature, blending the gameplay of jumping through levels and battling it out with opponents in real-time. Because players can attack each other with waves of extra enemies, it’s not just a speedrun or race to see who can get to the end of each level first.

The attacking system adds an extra layer of competition to the gameplay, forcing players to adapt to a level that they otherwise might be familiar with when they see dozens of new enemies running their way.

Players can choose to attack others based on who has the most coins, who has the least amount of time left, who is attacking them, or randomly.

There’s definitely strategy involved here; in many cases, you may not want to attack someone who is low on time, because sending enemies their way can help them stock up on more time.

Like in many other battle royales, players often start dropping out very early on in the competition. In Super Mario Bros. 35, the competition starts getting fierce when there are fewer than 10 players remaining.

This is when you may start seeing floods of extra enemies appear on your screen where you normally wouldn’t see them (indicated by a faded green instead of their regular colors. If opponents are on advanced stages in the game, you may even get several Bowsers sent to you in the 1-1 stage.

The game challenges what you think you know about Super Mario Bros. Not only do enemies show up where they don’t in the original game, the strategy here is totally different.

Instead of racing to the end of each level before time runs out, sometimes you’re much better off slowing down and making sure you defeat every enemy to stock up on time.

This is because once the competition gets down to 2-5 players, you can only rely on your skill so much; at this point, all of your opponents are just as good at the game as you are, if not better. Eventually, it may come down to which player has the most time on the clock.

Overall, the idea behind Super Mario Bros. 35 is brilliant, though not all of its ideas are executed in the best way.

For example, the stage select in the beginning doesn’t guarantee you will start with it. It’s simply added to the pool of stages that everyone else chose, rotating through each one.

This means you can be playing stages 1-1 and 1-2 over and over again, especially since 1-1 is the only stage that is unlocked from the start (so it’s the only ones beginners can choose). It gets extremely repetitive cycling through the same beginning stages so many times in a single round.

Not only is it repetitive, but it often makes the game drag out for a long time. Since so many players are selecting the first couple of stages, the enemies and hazards here are quite basic. These stages are easy for the experienced players who make it to the top five, which makes it even easier to plow through them and gain extra time.

I’ve been in games where it takes 10 minutes for a single person to drop out by the time it gets to that point, and some of my longest games have been upwards of 20 minutes or more just waiting for it to get down to the top two or three players.

It really relies on somebody making a silly mistake or somehow running out of time (which is hard to do when there’s a surplus of easy enemies to defeat).

This wouldn’t be so much of a problem if there were other ways to attack other players and get more aggressive as the competition narrows.

The power-ups from collecting coins give you boosts like a mushroom, fire flower, or star, which are great for helping you stay alive, but they don’t always help for eliminating the competition. Sometimes sending more enemies just means giving your opponent more time.

Perhaps there could be more of an incentive for picking difficult stages so that people wouldn’t only select the first few with the easiest enemies. This may be a problem in a few months when players have more levels unlocked, but right now, the game becomes boring quickly.

The novelty of the game wears off fast, so I wonder if most players who try it out won’t play it too much after their first win. Coins collected in each level are added to your cumulative total, but there’s nothing to spend them on besides a power-up to start the next game with.

Super Mario Bros. 35 is an excellent idea that gets a lot of things right, but it needs some fine-tuning in these types of areas for it to stay relevant and interesting in the long run. Besides those things, though, it’s a lot of fun to play for anyone who wants a higher stakes version of the original Super Mario Bros.

It’s a shame that the game is only available for Nintendo Switch Online subscribers to play until March 2021. This makes me think they won’t bother adding new features to the game, which is somewhat sad because it has so much potential.

I believe Nintendo should be leaning into these types of new experiences for online subscribers instead of testing the waters and backing out so quickly.

It’s rare to get these fresh takes on old games like Tetris and Super Mario Bros., so my hope is that Nintendo decides to build on these ideas over time and make them even better than before.