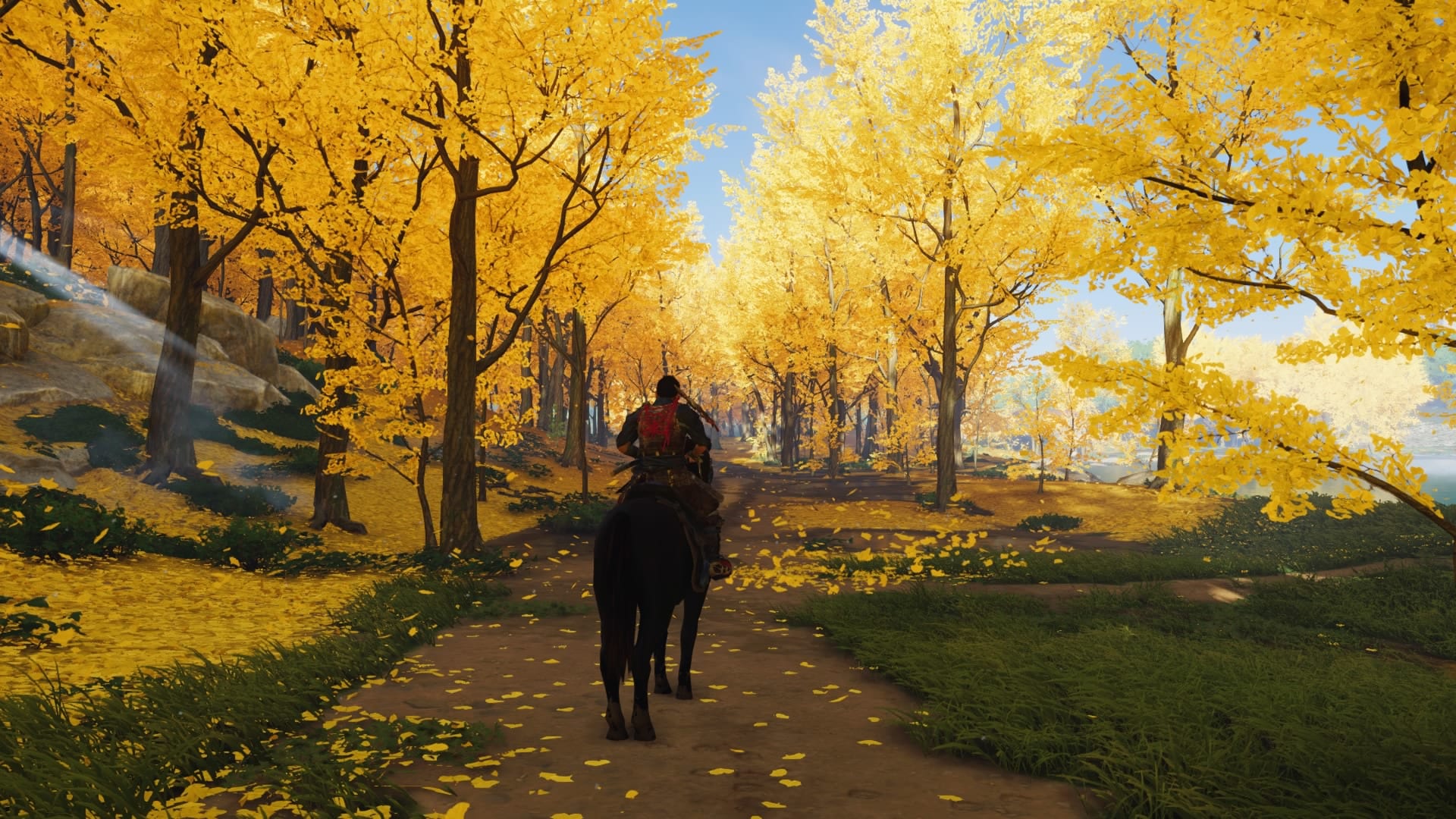 Sucker Punch’s latest hit, Ghost of Tsushima, is a beautiful game to look at. While it may not be as graphically astounding as, say, The Last of Us Part II, its unique art style and cinematic direction are truly special. But I’m having a tough time escaping from its grasp for more reasons than just its beauty.

The huge island of Tsushima is separated into three distinct regions, with each one filled to the brim with various distractions for Jin Sakai to complete. And while there are only a handful of different activities to discover, there’s an element of charm in the way that they’ve been crafted which makes the practice of exploration an almost meditative experience.

You can take a dip into the hot springs and reflect on your Mongol-eradicating journey so far, or just think about some tasty Sake. There are incredibly peaceful Haiku spots that allow you to become an amateur poet in mere seconds.

One of my favorite things about Ghost of Tsushima is that it isn’t afraid to put away action in favor of quiet, introspective moments, which are hard to come by in big AAA video games.

A lot of your time spent in this game is riding on the back of your horse while the sun’s rays are shining through a densely wooded forest, or rain pouring down in the middle of the night.

Of course, there’s a fairly compelling main questline to follow along, but I’m honestly finding it hard to knuckle down and concentrate when there’s such an immersive sandbox to go an explore. There are dozens upon dozens of different side hustles to get involved in all around the map.

Just to give you all an example, here’s the bottom half of Tsushima’s map and each icon is a specific activity or side quest.

I’m obsessed with collecting and doing every little thing on the map before moving onto the next story point. It’s so enjoyable to explore and because the world is so quiet and tranquil (when you’re not fighting the Mongols, of course), playing this can be oddly therapeutic for me.

Checking off everything on the map and overpowering Jin feels very rewarding. Now, after spending several hours in Ghost of Tsushima, the idea of grabbing that coveted Platinum trophy doesn’t sound too bad right now.

Ghost of Tsushima is a fantastic game that really changes things up when it comes to how you can explore an open-world setting. By stripping a lot of the UI to create a seamless gameplay experience, Ghost of Tsushima totally immerses you into its world.

By using the wind as a guide, there’s no disruptive opening of the map to take you out of the experience. Following yellow birds, for example, and spotting the flames of burning fire — you’re constantly interacting with the environment to gather clues on where you should go next. It’s totally absorbing.

Funnily enough, though, despite my passion for the game, I find myself tuning out of its main plotline cutscenes. Although the gameplay aspects of these pivotal story beats are exciting to play through, the cinematic moments aren’t doing much for me.

That is to say, I’m not really vibing with the story itself.

Perhaps it’s because I just finished playing The Last of Us Part II the other week? I don’t need another long, cinematic, and harrowing experience. What I need is a palette cleanser, a vibrant and exciting open-world to get lost in…. a video game to just sit back, relax, and enjoy.

Ghost of Tsushima has so far been exactly that; completing side quests, praying at shrines, composing Haiku’s, and chasing animals are really distractions from its actual story. But I’m entertained either way.