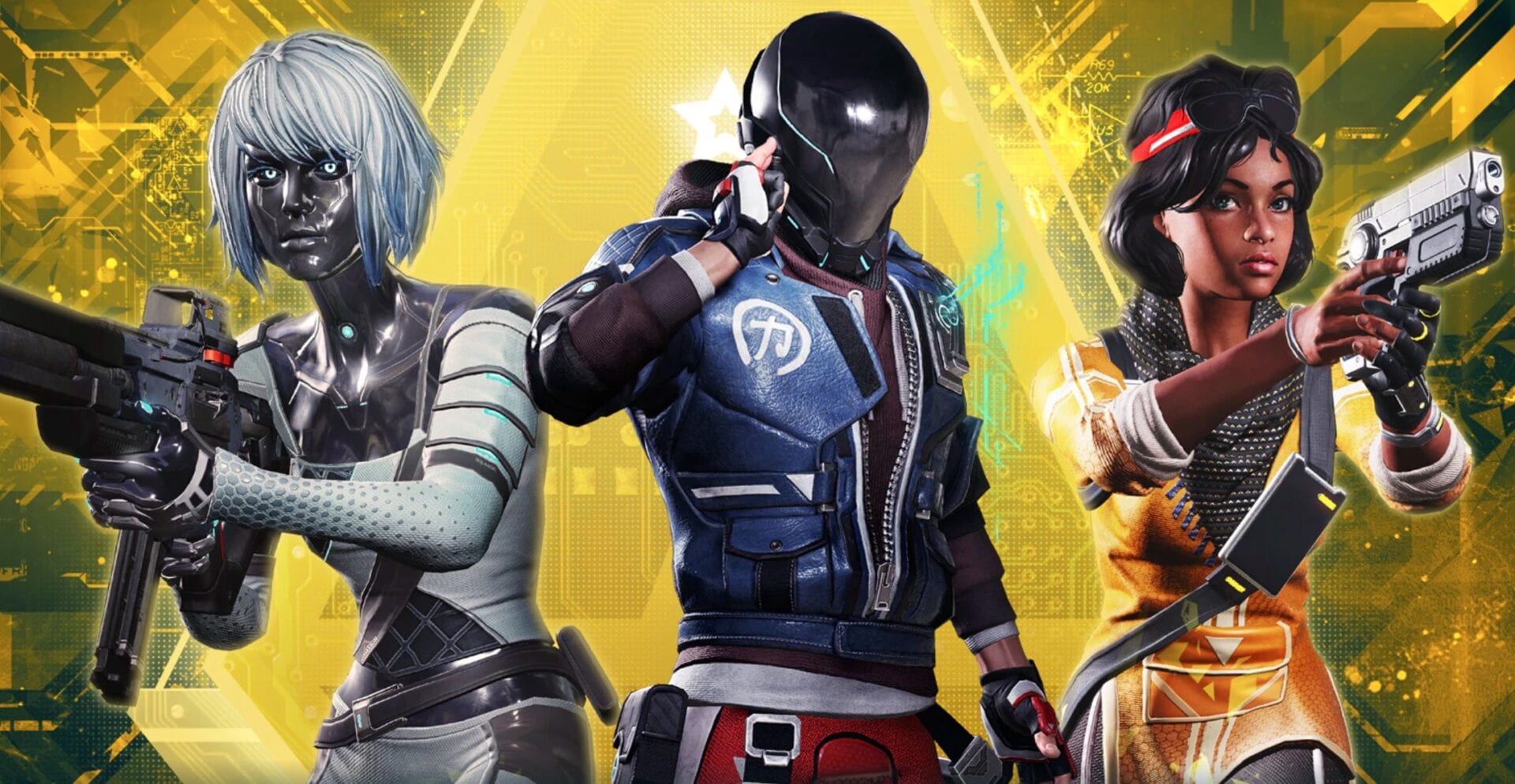 Drop in the Right Spot

Similar to other Battle Royale games out in the wild right now, the beginning of every match in Hyper Scape starts with the players dropping down into the map via some sort of escape pod.

You’ll notice that there are several different areas to choose from but if you see any locations with bold orange text, those are going to be hot spots for the competition.

Those highlighted locations such as The Line, the Food Court, and Archives are home to rare weapons and Hacks (abilities you can pick up), which leads to them getting crowded.

If you’re feeling risky and want to bet your life for some top-tier weapons, then go for it, but if this is your first time playing Hyper Scape, we would recommend dropping into a location that’s not so popular.

Avoid any huge open spaces and be on the lookout for buildings that have multiple floors and staircases, as these tend to have tons of loot.

Hacks Are Your Best Friend

Speaking of loot, Hacks are your best friend in the world of Hyper Scape, and each player can carry two at a time. Hacks are essentially just your basic abilities in Hyper Scape. There’s not a wide variety of them at the moment, but if you have the right combination in your pocket, you can almost guarantee that you’ll survive for a long time.

Hacks are lying around all over the place, with some giving you the power of limited-time invisibility or another that allows you to put up a huge wall to protect your teammates. These can be used by hitting the shoulder buttons, and you want to make sure you find these ASAP.

The best Hacks in Hyper Scape that I would recommend using are the Ball hack, which puts you into a protective bouncy ball shield –it’s great for running away or holding onto the crown, which we’ll go into later.

Invisibility and Armor are great to keep on you as well since they can help you get out of sticky situations. Keep in mind that every Hack does have a cooldown timer, but if you find the same Hacks lying about the map, you can pick them up and fuse them with your equipped Hacks to give them a slight upgrade.

Stay Indoors When You Can

The key to winning Hyper Scape is staying away from the competition unless you’re sure that you can kill them without getting into any trouble with their squad-mates. I would stay indoors when you can and remain high on top of buildings and skyscrapers, peeking out when possible.

Staying above everyone will give you an advantage, allowing you to scope out your opponents while also staying hidden from snipers. Just make sure that you’re not standing in plain sight for all to see, because they will come after you.

And if you ever need to hoof it and quickly get out of a situation, your character will actually run a little bit faster if you’re not holding a gun, which can be done by holding down the weapon switch button for a second or two.

The Guns You Should Be Grabbing

The type of guns that you prefer using during your time in Hyper Scape will mostly come down to personal preference, but I would recommend having one light weapon and one heavy one that can deal tons of damage in an instant.

I find myself dying a lot more when I try to use only one weapon at a time, so make sure to just experiment with the variety of weapons and see what fits your playstyle best.

You can also pick up the same weapon and fuse it to your own to increase its power level, the same way that you would upgrade your Hacks. Make sure to tell your teammates what guns you’re using, so if they spot a new one, they can ping it for you to grab it and power up that gun of yours.

When you die in Hyper Scape, you’re given the chance to come back to life via restore points that appear in the same spot as your fallen enemies.

You’re basically a ghost when you die and it’s up to you to go and find a restore point, and then one of your teammates has to get to you and hold down a button for a few seconds.

And once that happens, you can come back into the game, but unfortunately, all of your loot will be gone.

If the restore point that you’re waiting at is far away from your teammates, try to either find a closer spot or grab their attention. You can also ping things for your teammates when you’re dead, so at least you can be somewhat helpful.

If you make good use of your Hacks and your weapons, you’ll eventually become one of the last few players remaining on the map in Hyper Scape. Instead of a closing circle that damages you, ala Fortnite, Hyper Scape works a bit differently.

Each sector on the map will deteriorate in a random order, and the game will alert you if you’re in a danger zone, eventually funnelling all of the players into a closed-off area, forced to do battle.

But to win a game of Hyper Scape, it’s not all about just surviving and eliminating the other opponents, you can also win via a Crown Victory.

Once there are only a few people left in a match, the crown will appear and if you can hold onto it for 45 seconds, you’ll win. But the catch is that everyone in the game can see who has the crown and where they’re at all times.

It becomes a frantic and dangerous game of King of the Hill and if you think you can get a hit on the crown-holder, go for it, and if you have the crown yourself, hang on to it and run the hell away.

Also, make sure to communicate with your team so that they can distract players who are attempting to snag that crown from you.

Hopefully, these Hyper Scape tips and tricks can help you get those first place wins every single round. For more on the new Battle Royale game from Ubisoft, you can check out more coverage down below.