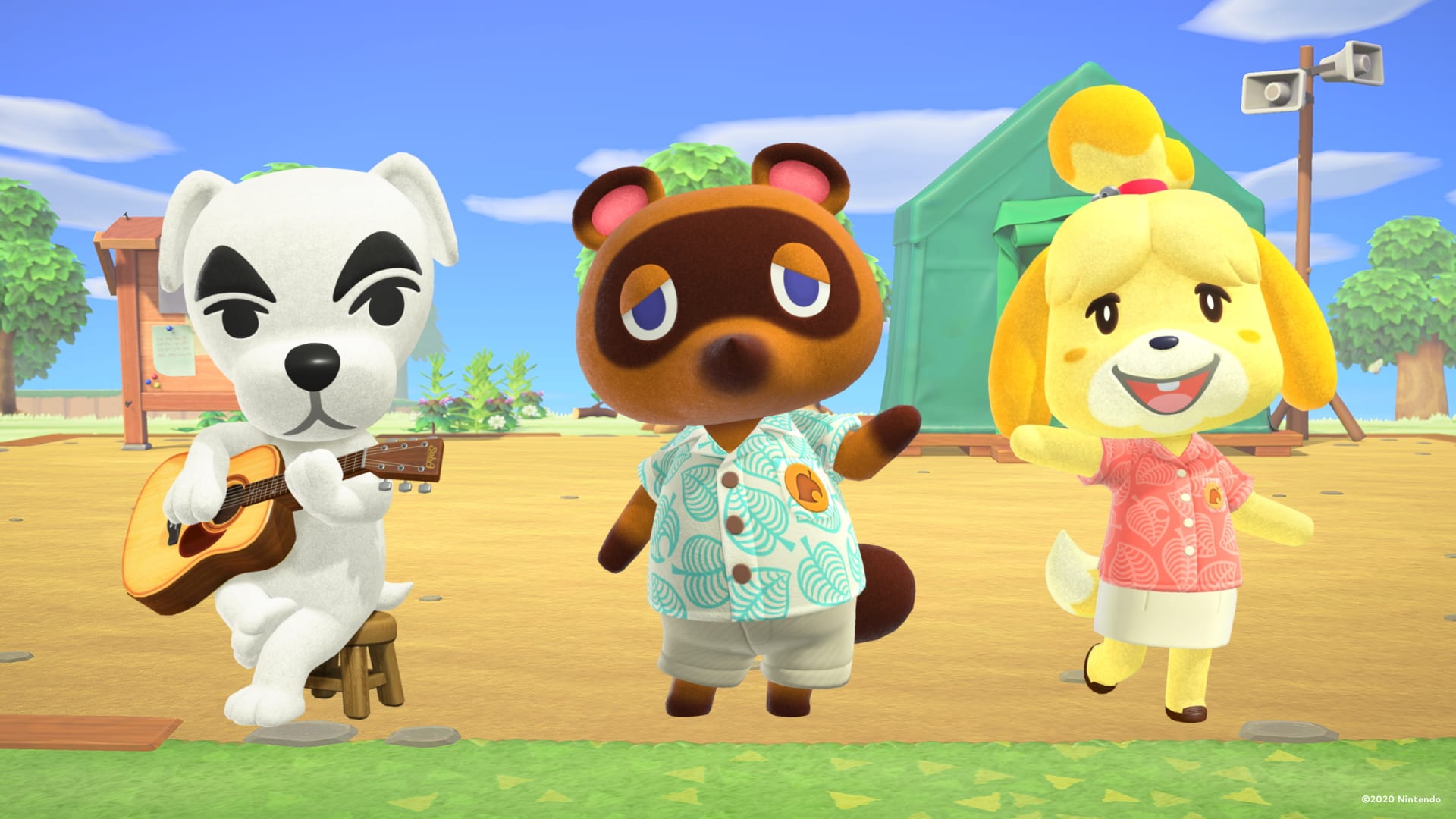 The Animal Crossing series is full of hundreds of memorable animals you can befriend. While everyone has a villager that they hope will move in (or out) of their town, there are other recurring characters who aren’t villagers.

These non-villager characters are the ones who build shops, visit our towns periodically, or run various aspects of the game. Some have been staples of the series from the beginning while others are new faces in recent years.

Though these characters don’t have actual houses in our towns, we see many of them working daily to make our virtual homes a better place. They each have unique roles and sometimes even backstories that you get to know over the course of the game.

The characters who made this list are ranked based on their role throughout the series. There are so many great choices that narrowing down this list to only 10 was extremely difficult. Did your favorite make the cut? Let’s find out!

Mr. Resetti is the cranky mole who is best known for yelling at the player when they turned off an Animal Crossing game without saving. If you did what you were supposed to and saved each time you were finished playing, you might never have encountered him.

The more often you quit the game without saving, the angrier Resetti would become. In some games, you could build the Resetti Surveillance Center, where he and his brother Don made their headquarters.

Resetti is noticeably absent from New Horizons, apparently laid off due to the new auto-save feature. It is heavily implied, though, that he runs the island rescue service since his theme song plays during a rescue.

Tortimer the elderly tortoise served as the town mayor in nearly every mainline Animal Crossing game, with the exception of New Leaf and New Horizons.

He usually spends his time in Town Hall except during holidays and events when he emerges to help out with festivities. In New Leaf, Tortimer is retired from his mayor duties and spends days living on the island.

Tortimer is absent from New Horizons, though perhaps we will cross paths with our old friend once again someday in a future update. He’s #10 on this list because his role in the games has gradually gotten smaller over time.

Either you love Redd or you hate him; there’s usually not much in between. It probably depends on whether he’s tricked you or not. Redd the sly fox runs a sketchy business selling paintings and sculptures, but they’re not always the genuine originals he says they are.

In most Animal Crossing games, Redd appears approximately once a week to persuade you to buy his items. You have to have a good eye to tell which goods are counterfeit and which are real.

Redd earns a spot at #9 on this list because even though he sells valuable artwork for the museum, his deception can cause you to lose your Bells on a worthless replica.

If you’re a coffee lover, you probably spent a lot of time hanging out with Brewster. He works at The Roost coffee shop in Wild World, City Folk, and New Leaf.

Other non-villager characters would come to The Roost and share their stories as you drink coffee with them and get to know them better. In New Leaf, you could even work for Brewster and make coffee for the other characters.

Another cool thing about Brewster was that he collected Gyroids and let you keep your collection at his store.

Brewster is #8 because he is a character who has improved throughout each Animal Crossing game, but now he is absent in New Horizons. An update to the game where he opens up The Roost in the museum would be a welcome addition.

Celeste is the sister of museum curator Blathers. She is the operator of the observatory in most Animal Crossing games.

In Wild World and City Folk, Celeste had the best role: you could visit her observatory and create constellations, which would sometimes appear in the night sky. In New Leaf, she allows you to open an exhibition room in the museum where you can display anything you want.

Celeste’s role in New Horizons is a bit different. Instead of having her own location, she visits randomly at night and gives out zodiac and space-themed DIY recipes.

Maybe we’ll be able to create constellations with Celeste in her observatory again someday. Until then, she ranks #7 on our list.

Kicks the skunk has a story arc in the Animal Crossing series in which we see him grow as a businessman. We first met him in City Folk in which he worked on the street as a humble shoe shiner.

All of the hard work must have paid off, because Kicks owned his own shoe store in New Leaf. His success allowed him to become a traveling shoe and accessory salesman in New Horizons, visiting the island once a week.

Kicks earns his spot at #6 on this list for being a notably hard worker. It helps that he’s always well-dressed and is so stinkin’ adorable.

Kapp’n has been a part of the Animal Crossing series since the very beginning. Though his typical role is a sailor, he has also been known to transport the player via taxi and bus.

The best part of Kapp’n by far is the rhyming shanties he sings during the trips. He frequently flirts and compliments you, and he also gives you wholesome advice.

By New Leaf, it is revealed that Kapp’n has a wife and daughter who live with him on the island.

Sadly, Kapp’n is absent in New Horizons, which is odd because it would seem so obvious for him to have a role in this tropical setting. Regardless, this lovable turtle easily ranks #5 on our list.

Sable is one of the three Able sisters who runs a tailor shop along with her siblings Mabel and Label. Of the three sisters, Sable is the most shy, and she actually has a fairly deep backstory.

If you talk to Sable every day, you can slowly bond with her over time and she will begin to open up about her past. Her parents died when she was young, which led to her raising Mabel by herself after Label left for the city.

While growing up, Sable was very close with Tom Nook, and some of the stories she shares indicates there may have been a previous romance between them.

Befriending Sable helps her gain confidence in herself, and it allows you to unlock the QR machine in New Leaf and extra pattern designs in New Horizons. Sable’s emotional backstory and character development are the reasons why she is ranked #4.

Out of all of the characters on this list, Isabelle was introduced in Animal Crossing most recently, yet she is one of the most recognizable characters in the entire series.

She is the lovable secretary who made her debut in New Leaf. She is completely dedicated to making the town a great place to live and helps the mayor in numerous ways.

Her role in New Horizons is a bit smaller: she simply works in Town Hall and gives the morning updates. She’s not all that useful, but hey, we still love her… let’s just give her something new to do soon, yeah?

Isabelle was met with such positive reception that she found her way into other Nintendo games, such as Mario Kart 8 and Super Smash Bros. Ultimate, so it’s no surprise that she comes in at #3 on our ranking.

Tom Nook has become such a meme in the gaming world, often called a greedy, money-loving crook, but let’s take a step back and look at him as a whole.

Nook has been the face of the Animal Crossing franchise since the beginning of the series. He gives us a free place to live in town, offering us interest-free loans and even part-time work to help pay it off.

Though he calls Timmy and Tommy his nephews, villager dialogue indicates that he rescued the pair off the streets and raised them as his own. Once they get older, Nook even lets them run his store.

He has good relationships with most other characters, though a rivalry with the sneaky Redd, which means Nook is truly looking out for the well-being of his town.

It’s fun to mock Tom Nook and exaggerate the whole loan situation, but if we’re being honest with ourselves, he is a genuinely good character who earns a spot close to the top of this list.

Coming in at #1 on our list is the one and only K.K. Slider. K.K. is a dog musician who appears in every single Animal Crossing game.

His role in the games has largely stayed the same, which is fine because it was perfected from the start. K.K., who comes across as a bit of a hippie, performs every Saturday night by playing his guitar and singing.

In every game, you can request a song for him to perform, or he will surprise you with something he thinks you might enjoy. In most games, he will give you a copy of the song you requested.

The “story” in New Horizons centers around K.K. Slider. Nook and Isabelle ask you to make the island as great as possible so that K.K. will come to perform. Once you get a three-star rating, he will begin appearing weekly.

K.K. is clearly passionate about performing because he plays for his audience completely for free. His repertoire grows throughout the series, and by New Horizons he can perform 95 different songs.

K.K. Slider is #1 on our list because of his passion, carefree nature, and talent as a musician.