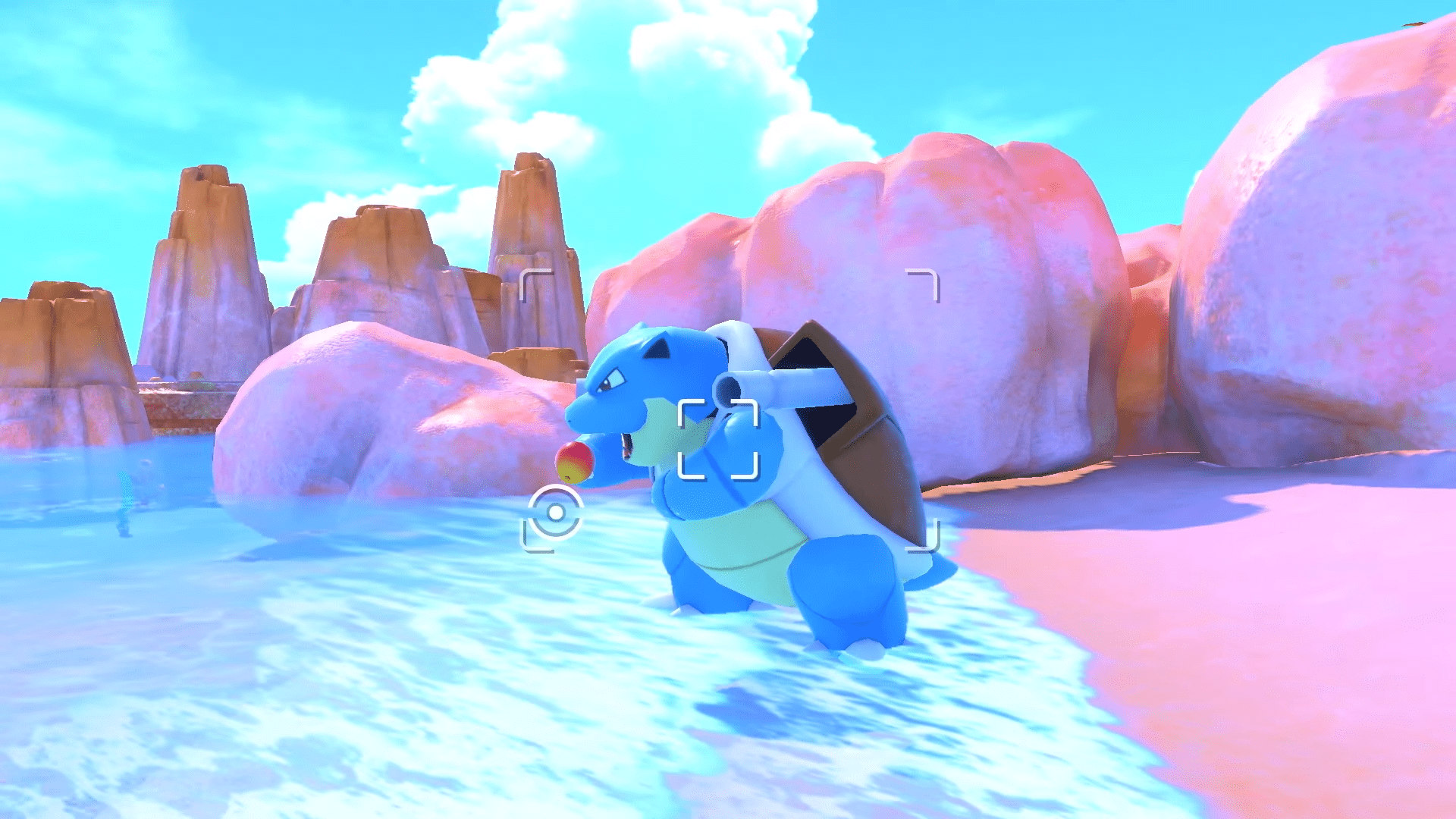 It finally happened. Game Freak and Nintendo finally gave fans what they’d been wanting for 20 years – a sequel to 1999’s cult classic Pokemon Snap. The excitement for the New Pokemon Snap trailer is palpable – a sequel long thought impossible has finally become real. What might not be as apparent, however, is one of the most exciting aspects of the trailer, hidden in an otherwise innocuous snippet of gameplay.

When fans tuned in to this morning’s Pokemon Presents, few expected that this dream game would make an appearance. It was a shock then, when out of nowhere, the Pokeball-shaped camera reticle appeared on screen. And during that surprise trailer, a quick snippet played of the Pokemon Blastoise having a beachside snack. But while most viewers just saw Blastoise eating an apple, I saw something far bigger. What I saw instead was…

Also Blastoise eating an apple. It’s honestly pretty innocuous when you describe it, but it’s a lot bigger than you might think, when put into the context of the greater Pokemon series. Lend us your ear for a minute, and we’ll take you through why this tank turtle’s fruity snack means so much for this game.

Let’s wind back the clock a few years, all the way back to 2013 and Pokemon X and Y. These games were the first in the mainline series to be in 3D, and featured all-new models for every Pokemon in the series. At the time, it was a huge deal. Two generations of 3D mainline games later, it’s much less so. What was once novel has now become rather worn.

The same copy-paste animations created almost 7 years ago have been continuously used over and over again since X and Y’s release. On one hand, it’s an effective way to future-proof work on the almost-900 monsters the series lets you trade and collect. On the other, it means every Pokemon is stuck with the same canned animations ad nauseam for the foreseeable future.

But New Pokemon Snap looks to change that. In other games, Pokemon do have eating animations, but they generally only consist of them chomping aimlessly at the air in front of them, regardless of what they’re being fed. New Pokemon Snap instead shows us something different. Blastoise doesn’t bite at the air like a madman. He picks up the apple in his hand and puts the whole thing right into his mouth. And it’s beautiful.

So why go on such a long tangent about Blastoise eating an apple? It’s surely such an insignificant, miniscule portion of this game that it can’t be of any importance. But it’s because it’s such a small thing that it is so monumentally important – it’s the perfect encapsulation of the extra mile of effort and detail that’s going into New Pokemon Snap.

It would’ve been so easy for developers Bandai Namco and Hal Laboratories to just reuse the same animations that Game Freak has for seven years. A Pokemon Snap sequel where Pokemon wandered around with the old X and Y animations still would’ve lit the world on fire with excitement, and would have been much easier to develop. But they’ve gone above and beyond that baseline here, and the game will be all the more special for it.

In this one minute trailer alone, we all get to see so many small details that make these fantastical creatures feel more real than they ever have before. Pelipper nests dot rocky outcroppings. Zangoose watches as a flock of Vivillon flutter by. Hoothoot’s eyes glow under the shade of a tree. Torterra and Dodrio squabble over territory. Blastoise eats an apple.

All of these little details weren’t necessary to make this game, or make it successful. But if all of these little touches and more that we see in the trailer alone are in any way indicative of the kind of content we can expect from the final game, then we’re in for a treat. It will truly be a rich, in-depth experience that follows in the footsteps of what made the original Pokemon Snap such a beloved game all these years later.

In a vaccuum, Blastoise eating an apple is a tiny, insignificant part of this wonderful trailer. But as an indicator of the amount of love, effort, and care that’s going into making New Pokemon Snap and its collection of critters feel real? It’s enormous.

We could have simply seen Blastoise plod down the beach, rotate in place, and chomp at the air until the apple vanished, and we still would have cheered. But instead, Blastoise leans down, gently lifts up the apple from the sand and seafoam, and places it into his mouth. And the game and franchise are all the richer for it.

Prepare for Trouble! Jessie & James Are Now in Pokemon Go