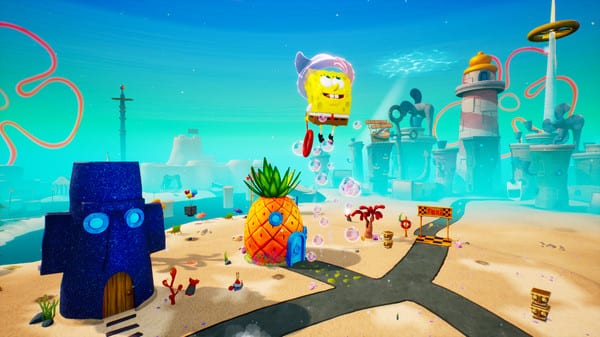 The King Jellyfish is the first boss in the game, at the top of the mountain in the first area. It’s not a long fight and you don’t have to do a whole lot to win, but you’re given no hint about how you should approach it.

How to Beat King Jellyfish in Battle for Bikini Bottom Rehydrated

Breaking it down, you will beat King Jellyfish after hitting him with Spongebob’s bubble wand three times. After the first hit, he will send out some smaller pink jellyfish, and after the second it will be the electric purple ones.

Throughout, he will use his one main attack which can be tough to deal with. He will pulse with electricity, smash down to the ground, and let out a circular barrier that’ll hurt you. You need to attack him at some point, but it’s not clear when. If you attack at most times, it will hurt you and not him.

What you need to do is back away from that start of the fight and wait for the attack. When he’s getting ready to fire the circular pulse out, get closer to him and jump over the barrier as quickly as you can.

Then, jump up to the main body of the King Jellyfish and attack with square if you’re playing on PS4 (X on Xbox One or Y on Switch). That should hurt him and take you onto the next part of the boss fight.

To beat King Jellyfish, you just need to do that three times. You cannot attack his tentacles at any point, even following his attack, so be precise with your timing throughout. Once you’ve got the idea of how to attack, the whole fight should be pretty simple.

That’s everything you need to know about how to beat King Jellyfish in Spongebob Squarepants Battle for Bikini Bottom Rehydrated. For more tips and tricks on the game, be sure to search for Twinfinite.

Hitman 3: How to Get Sniper Rifle
Hitman 3 Dartmoor: How to Get Into Greenhouse
Among Us: How to Download Jester Mod

Every Confirmed Nintendo Switch Exclusive Releasing in 2021
To Top