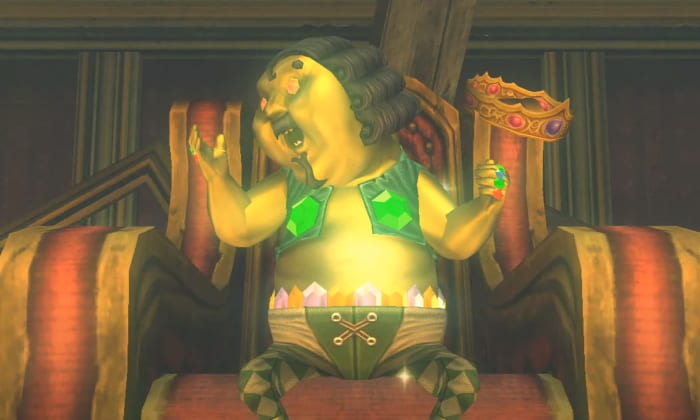 The Legend of Zelda has had hundreds of interesting characters over the past 34 years. We all know Link, Zelda, and Ganon, of course. And there are many other major recurring characters we’ve come to know and love over the years.

But there are plenty of side characters in the Zelda series that have a surprising amount of depth as well. Sometimes, these characters can be the most interesting of them all.

We’ve compiled a list of some of the best side characters in the series that aren’t too obscure but had small roles that you probably forgot all about. How many of these 10 side characters do you remember?

Is Mother Maiamai an octopus? A hermit crab? We’re not sure, but she operates one of the grandest optional side quests in A Link Between Worlds.

All 100 of Mother Maiamai’s children are lost around the world of Hyrule, and it is Link’s job to find them and return them to her. Rescuing the baby Maiamai rewards Link with various item upgrades and sword skills.

After the 100th baby Maiamai has been saved, Mother Maiamai and 99 of the babies leave Hyrule. The 72nd Maimai that Link rescued is the only one that stays behind.

LD-301S Scrapper is one of the Ancient Robots from Skyward Sword. More commonly known as Scrapper, he is revived when Link delivers an ancient flower to Gondo’s scrap shop.

Scrapper has a strong disdain for Link, bluntly calling him “Master Shortpants,” every time they interact, but he chooses to help him anyway because of his infatuation with Fi.

His role in the game is to carry various items during Link’s quest, such as delivering the pumpkin soup to Levias and transporting water to the Fire Sanctuary.

Kilton is the monster-obsessed shopkeeper who operates the Fang and Bone store in Breath of the Wild. At first, his shop can only be found near Death Mountain, but once Link talks to him for the first time, he expands his business to the outskirts of the main villages at night.

Instead of Rupees, Kilton only accepts a currency called Mon, which he gives Link in exchange for monster parts. He sells a variety of weapons and masks that can’t be found anywhere else in the game.

At the edge of Lake Hylia in Ocarina of Time live two dancing scarecrows named Bonooru and Pierre. As a child, Link can speak to Bonooru to create a unique, eight-note song, which they call the Scarecrow’s Song. Bonooru promises to remember it forever.

If Link returns to Bonooru as an adult, Bonooru asks him to play the song again. This grants Link the ability to summon Pierre in order to access hard-to-reach places in dungeons with his hookshot, which helps to reach chests and Gold Skulltulas.

Most people remember Pierre appearing in Majora’s Mask, where he helps Link learn the songs to slow and hasten time.

Many side characters in Majora’s Mask have depressing backstories, but Grog’s is a bit different. Grog hangs out around Romani Ranch, and when spoken to, it is clear how fond he is of the cuccos at the ranch.

Grog tells Link that he has accepted his fate of the moon falling and that he generally has no regrets in his life. He only wishes that he could have seen his chicks grow into strong, healthy roosters before everyone perishes in three days.

Link can use the Bremen Mask to march with the chicks. For some reason, this causes them to grow into roosters. Not sure how that happens, but it doesn’t matter, because this delights Grog so much that he gives Link the Bunny Hood, a valuable item for traveling across Termina quickly.

Remember that time Link raised a child in between his quests to save Hyrule? No…?

Bipin and Blossom are a couple that appears in both Oracle of Seasons and Oracle of Ages. Whichever game is played first, the two will be celebrating the birth of their son, and they will ask Link to help name him.

If Link returns to the family periodically, new dialogue and even choices begin to appear. The baby starts to grow over the course of the game, and Link’s responses to theses choices influence his personality as he gets older.

When the first Oracle game is linked to the next, the Bipsom child continues to mature into an adult. Based on how Link raised him, he becomes either a singer, warrior, arborist, or a slacker.

Agitha is a peculiar, insect-obsessed child who lives in Castle Town in Twilight Princess. As the self-proclaimed Insect Princess, her desire is to throw a ball for all of the Golden Bugs in Hyrule.

Link can receive prizes for giving her a male and female bug of every kind, and once the final bug is given to her, she rewards him with the Giant Wallet.

Although Agitha is a minor character in Twilight Princess, she gained a bit more popularity after appearing as a fighter in Hyrule Warriors.

Mila and Maggie have quite an interesting story in Wind Waker.

Along with Link’s sister, Aryll, both girls are kidnapped and taken to the Forsaken Fortress at the beginning of the game. Mila came from the richest family on Windfall island, whereas Maggie was raised dirt poor.

After their rescue, their lives basically swap: Mila’s father spends all of their money to rescue her, so they become poor; meanwhile, Maggie’s father sells the treasures Maggie brought back, which makes them rich.

Link can complete some side quests relating to the two girls. In one, he catches Mila stealing from a safe to try to become wealthy again. In another, he helps deliver a letter from Maggie’s new love, a Moblin she met while kidnapped.

Never judge someone by their appearance: Batreaux is a terrifying-looking creature who lives beneath Skyloft in Skyward Sword, but he has a genuinely kind heart.

Batreaux’s deepest desire is to become a human so that people won’t fear him. His only friend is a young girl named Kukiel; Link first finds him after suspecting that he had kidnapped her.

Instead, Link gives Batreaux items called Gratitude Crystals that are found all across Hyrule in order to help him become a human. After receiving 80 of them, he can finally become a human and join the townspeople of Skyloft.

Jovani is a man in Twilight Princess who can be found hidden in a building in Hyrule Castle Town. He had sold his soul for endless riches, but he realized that probably wasn’t such a great idea after his entire body turned to gold, immobilizing him.

All Jovani could do is sit inside of his house surrounding by his new wealth but unable to move or use any of it. Even his cat, Gengle, was turned to gold.

Link can help him reverse this by bringing him Poe souls to regain his life. He gives out rewards as he begins to regain use of his body, and after collecting 60 Poes, Jovani can turn into a human once again.