The Legend of Zelda: Breath of the Wild on Nintendo Switch

The Legend of Zelda: Breath of the Wild is truly the closest realization of what the first game on the NES was trying to achieve. There are very few open world games I’ve played that feel as freeing and energetic, and while fans of the Zelda series may find a bit of a different game from what they’re used to, Breath of the Wild combines the best elements of the franchise with that of a masterfully executed open world game.

Every facet of Breath of the Wild works in favor of the open, from its nonlinear and mysterious story to head-scratching dungeons, and a wealth of collectibles. Instead of having a lengthy prologue or tutorial, the game starts with Link waking up in mysterious ruins, before setting out to the open world ahead of him. The story can be pursued in any order you choose, allowing you to explore the world at your leisure, climbing practically every surface from trees to sheer cliffs.

Just clambering around this massive world is incredibly satisfying, piecing your way up a huge cliff just to see a gorgeous sunset at the top, or using your Shiekah Slate to pick out a tiny rock you can paraglide down to. There’s a rare sense of discovery that Breath of the Wild has that few other games can really capture. The key to everything, though, is how liberally discoveries are sprinkled throughout the world of Hyrule. Nintendo has done a great job of giving you an incentive to peek around every corner, placing Koroks, Shrines, treasure chests, rare items, and more on every portion of the map.

The story manages a layer of mystery that keeps you wondering, and wanting to learn what happened in the 100 years preceding Link’s strange awakening. The main quest has you searching out four “Divine Beasts,” each representing a different race of Hyrule, each a key in the fight against Ganon, and each serving as a main dungeon of the game. Although the Divine Beast dungeons aren’t as lengthy as what you might see in other Zelda games, they each have impeccably well designed puzzles that let you shift or move a part of the creature itself. They’re mind-bending and challenging, but ultimately feel immensely satisfying to overcome. 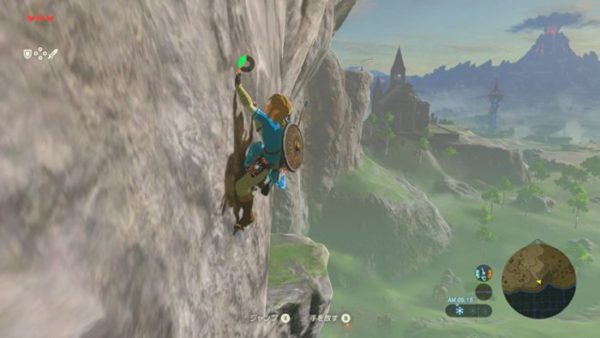 The biggest difference that struck me between Breath of the Wild and previous Zelda games is how truly alive the towns feel. Link is alone in much of the world of Hyrule, so the villages are bastions of activity, letting you rest at an inn and recover your strength, restock your depleted supplies, and learn information about the area from the locals. It’s an absolute breath of fresh air, after spending an hour poking around cliffs and meadows, to wander into a new town or stable after half an hour of wandering in the wilderness, just to meet new and fascinating characters.

Breath of the Wild still has the same goofy charm in its writing and NPCs that the rest of the series does, and there’s some truly hilarious moments of dialogue throughout the game. Towns are packed with personalities, many of which will give you a sidequest, hint at a secret, or help you learn more about the game’s lore. I couldn’t get enough of poking around each and every corner of these locations, and returning frequently, only to find a subtle change with a character’s dialogue, or find a new sidequest that popped up. 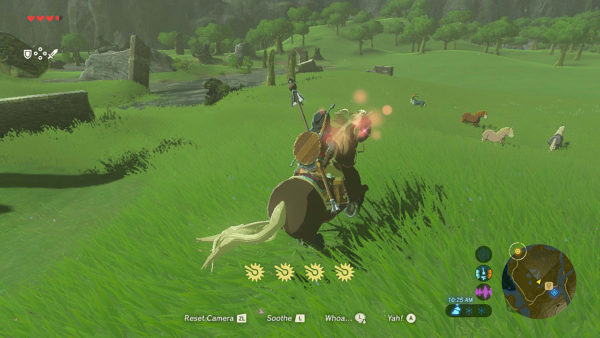 Sidequests more often than not have quirky stories and characters attached to them. They also employ every aspect of the game, requiring you dabble in cooking, climbing, combat, runes, and everything else. One of my favorite side missions saw me paragliding down to a secluded island in search of a Shrine. Suddenly a voice spoke to me, challenging me to survive on the island, and stripping me of all the items I’d collected on my journey. I was forced to scrape what weapons and food I could from the area, while trying to solve the puzzle I was forced into.

While there are four main dungeons to tackle, most of the puzzles in the game take the form of Trial Shrines. There are 120 of these locations scattered around the world, and each one features a puzzle or set of puzzles to solve, with your reward being a Spirit Orb that can be used to boost your Stamina or Hearts. Mostly these are smartly designed self-contained puzzles, each with a specific catch or gimmick.

Early on in his adventure, Link acquires powers called runes. These let you affect objects in the world, for example with magnesis, you can pick up and move any kind of metal object. You also have stasis, which freezes an object in time, while cyronis will create a pillar of ice out of water and timed bombs let you use explosives.

Unlike other Zelda games, you have practically all of your tools available to you at the start of the game. Breath of the Wild doesn’t suffer for this, however, as it’s equally engaging to know you have tools at your disposal as to figure out how to use them. Runes adhere to the physics of the world, meaning there’s usually more than one way to solve a puzzle. The physics engine can also lead to some hilarious results, like accidentally blowing yourself off a cliff with a bomb. It’s a system that feels rewarding when you piece a puzzle together, and you really feel like you overcame the trials yourself and didn’t just have to wait until you got the right item.

Combat in the game will still be familiar to anyone that’s played a Zelda game, but some key elements have been changed up, also making things much more challenging. You have three types of items to equip–weapons, shields, and bows, in addition to different armor to gear Link with. Each item type plays a key role — weapons for close up, bows for ranged engagement, and shields to of course defend yourself with. Enemies hit hard, really hard, so you need to be on your toes with these arms, and especially keeping weapon degradation in mind.

Weapons degrade at a fairly fast rate, meaning you constantly need to monitor your supply and be on the lookout for new items. The system was tough to get used to at first, almost feeling unfair. I constantly had to worry about picking up new weapons, and met fresh disappointment each time I discovered a shiny new weapon, only to have it break after engaging a couple groups of enemies. I was steadily worried about not having enough weapons to take out enemies for a while, however, as you continue on in the game this becomes less and less of an issue.

Weapons become plentiful later on, and you usually don’t have trouble finding them, meaning my combat style quickly shifted from hesitant to all out attack. At some point I wholly stopped caring about my weapon’s durability, and every time I noticed one about to break, I’d throw it right at my enemy‘s face. 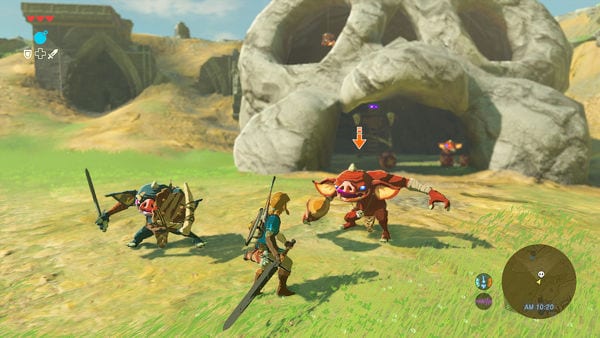 Breath of the Wild’s combat may seem simple at first, but it grows more challenging and complex as you learn more. Runes can be used in fun ways during battle, and Link has a few special moves of his own. Dodging an enemy‘s attack at the precise time lets you unleash a devastating flurry attack that lands multiple blows. Meanwhile, jumping off of heights and pulling out your bow slows down time, letting you land a critical hit with grace and accuracy.

You’ll encounter various groups of enemies across the world of Hyrule, with everything from Bokoblins to Lizalfos and more dangerous optional bosses. While exploring, you’ll also run across the beings named Koroks, who function as collectibles. Koroks are hidden everywhere, under rocks, in trees, by solving little puzzles in the world. There’s literally hundreds of them in Breath of the Wild, and each one you find rewards you with a Korok Seed, which can be traded in to increase your inventory size.

While you’re contending with the forces of evil in the game, Heart recovery is handled a little differently too. Recovery is done by eating food now, which you can pickup in the world and cook to make complete dishes. Fires and pans are used to combine items in your inventory, letting you make both food and elixirs, which give you temporary stat boosts. Creativity and experimentation is key here, as you need to figure out what combines well together.

The small details are what really make Breath of the Wild pop, and it’s such an intricately built game. Lightning is attracted to your metal weapons, trees can be cut to make bridges, and spinning around in front of a dog will make it do the same. Running around the game naked will elicit responses of shock and judgement, and once, a friendly NPC tried to stop me from jumping off of a bridge. These are just a few examples of a multitude of tiny details that give the game life.

The ambient soundtrack helps set the tone of self-discovery, and the art style used in the game makes for some absolutely breathtaking moments. On top of this, every region of Hyrule is incredibly distinct, with everything from snowy mountains to scorching deserts and lush fields. Eventually, you can even get a sense of where you are just by the local scenery. 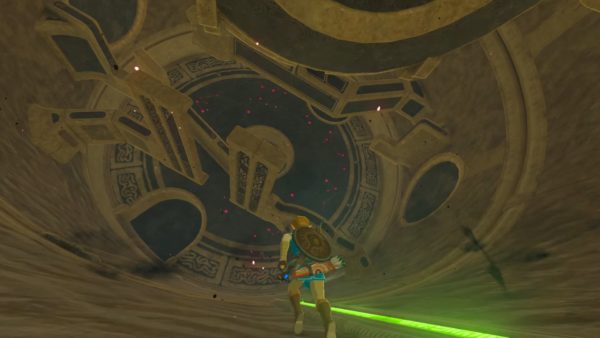 The game runs incredibly well on the Switch tablet and looks gorgeous, while TV mode can take a hit here and there with framerate. It wasn’t ever a serious issue for me, however, and either way I played the game worked just fine. There’s really no better game at the Switch’s launch to show off the potential of Nintendo’s new handheld hybrid.

The freedom that I felt while playing Breath of the Wild is something almost no other game has given me. Each Shrine, Korok, and secret I uncovered was my own personal victory, not something the game had handed over. I approached the story how I wanted to and as much as I wanted to, and because of this, the final showdown with Ganon felt all the more satisfying. I had been on a grand journey, and meticulously prepared for this, while meeting the citizens of Hyrule, helping them and learning to care for those I was protecting. Even after finishing the main story around 60 hours in, there were still tons of sidequests I hadn’t completed, and I even found entirely new sections of the world with new characters to discover.

Breath of the Wild doesn’t feel like an experiment for the Zelda series, it feels like the realization of what Zelda always wanted to be. It easily stands toe-to-toe with the best open world games of the generation, and is a marvelous way to introduce a brand new system. Whether you’re a Zelda fan or not, this is certainly an experience you should not miss out on.