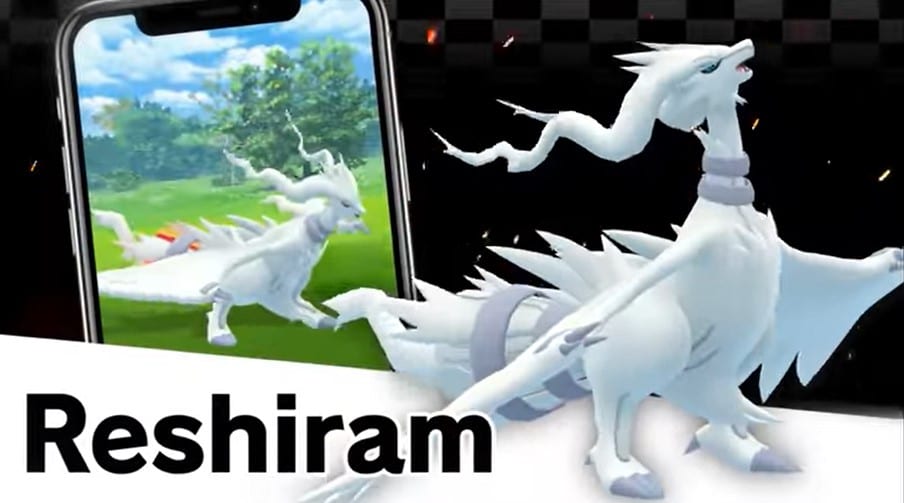 The Tao Trio is finally making its way to Pokemon GO. The first of the bunch is the fluffy white Dragon, Reshiram. Hopefully, with the help of our Reshiram raid guide, you’ll be able to catch this Legendary Dragon. Here’s everything you need to know about Reshiram’s raid guide, counters, stats, and more in Pokemon GO.

Yet another Legendary Dragon-type is joining Pokemon GO, but it’s hard to complain. It feels like you can never have too many good Pokemon for raiding. Follow this Reshiram raid guide and you’ll be able to blow through this battle with ease.

How to Catch Reshiram in Pokemon GO

Since Reshiram is only available in five-star raids right now, that’s going to be your only way to catch this beast. Like some of the other recent Legendary raids, this one is possible with a party of just two trainers. But you should still go at it with four if you want to get through it comfortably.

As more Shadow Pokemon are added to the game, you’ll surely see more of them show up on raid counter lists. Fortunately, this Reshiram raid guide isn’t bogged down by shadows. All you need are some solid Dragon-types and maybe even a Rock-type or two.

Both Rock- and Dragon-type moves will hit Reshiram with super effective damage. If that means you need to break out the TMs on a bunch of Pokemon, then so be it. It’ll be worth burning through them if you need more Dragon- or Fire-type mons for raids.

The Shadow versions of Dragonite, Salamence, and Tyranitar are all fantastic against Reshiram. Their standard versions are also good, but there are better counter options out there. Two more Dragons round out the top five Reshiram counters.

Note: All counters listed in this Reshiram raid guide are level 35, do not account for the raid boss’ moveset, and have no weather or friend bonuses.

Salamence is the only Pokemon on the list that has a Shadow and regular form on the list of counters. Again, we see multiple Dragons, but now the Rock-types have the majority when we look at the bottom half of the top 10 counters.

Dragonite and Tyranitar are also good if you don’t have any of the counters you see listed in this Reshiram raid guide. But if you have enough of the Pokemon listed, then you should go with them every time.

This big Dragon Pokemon from the Unova region is a fantastic Fire-type attacker in raids. It’s one of the best if not the best option for most raids that favor Fire Pokemon. However, it’s not all easy sailing for Reshiram.

As we mentioned earlier in this Reshiram Raid Guide, the Vast White Pokemon has three glaring type weaknesses: Rock, Ground, and Dragon. Unfortunately, the Ultra and Master Leagues both have lots of powerful Dragon-types.

Sure, Reshiram can hit them for super effective damage too, but it won’t survive long enough to get KOs. That’s not to say it’s a bad choice in PvP battles though. We’ll have to see how the battle results come in throughout the season with Reshiram added to the pool before making a final judgment though.

Reshiram has two great fast attacks, but you’ll probably just want to stick with Fire Fang. If you catch enough Reshirams to have multiple for raids and one or two for PvP battles, then you might start looking at Dragon Breath.

But this Legendary is a Fire-type raid battler through and through thanks to its massive Grass resistance. It wouldn’t be surprising to see Reshiram pop up in Grass Pokemon raid guides from now on. Here are Reshiram’s fast attacks:

Again, you’ll want to focus on Fire here. Overheat is ridiculously powerful but it takes a long time to charge. Fortunately, it has resistances to Steel- and Grass-type Pokemon which will help it survive long enough to get off multiple Overheats in a single raid. Here are Reshiram’s charge attacks:

You shouldn’t be too worried about this Dragon when focusing on this move list through the lens of the Reshiram raid guide. Draco Meteor is a tough move to survive, but all the other attacks are relatively less frightening.

Better yet, you have a 75 percent chance that you’ll run into a Reshiram that doesn’t even have Draco Meteor. Just go all out with your Dragons and then, on the fly, figure out if you’ll need to dodge or load up a second team.

But if we look away from the Reshiram raid guide for a moment to focus on this moveset in terms of PvP, then Dragon Breath is very dangerous. It can easily chew through the HP bar of any Pokemon without Dragon resistance. Crunch could be used to bait out shields and Draco Meteor or Overheat could finish off opponents.

Reshiram actually shares base stats with Dialga which makes this new Legendary one of the most powerful mons in Pokemon GO. Sadly, the Defense and HP don’t give Reshiram the staying power it needs to excel in PvP battles.

But Reshiram’s ridiculously high attack will make it a fantastic pick for any future raids against Grass-, Bug-, Steel-, and maybe some Dragons-types. It wouldn’t be surprising to see Reshiram on a list of counters for the Zekrom or Kyurem raid guides. Here are Reshiram’s stats:

That’s all there is to know about Reshiram’s raid guide, counters, stats, and more in Pokemon GO. Don’t forget to check out our Pokemon GO Wiki Guide if you liked this Reshiram raid guide. If you want to catch up on the latest Pokemon GO news, then check out these three articles to learn more: