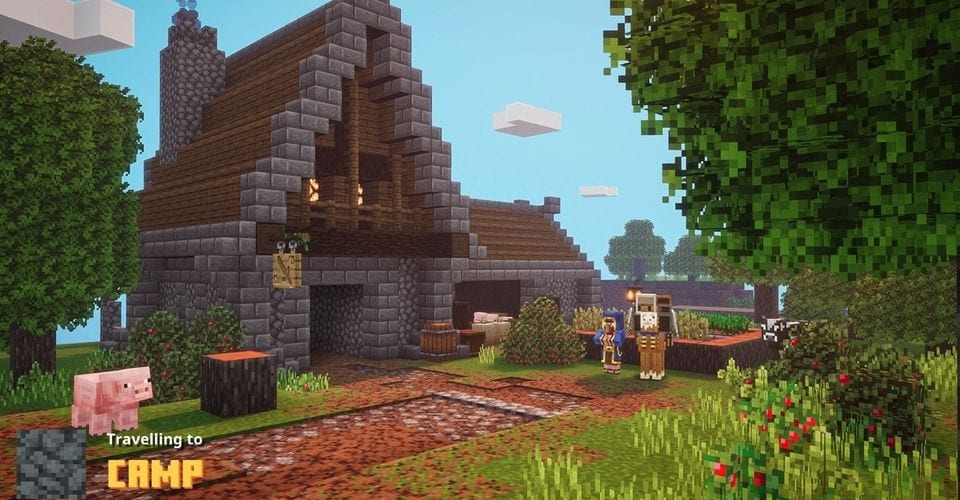 In between your dungeon crawling antics in the meat of the Minecraft Dungeons experience, you’ll be sent back to your Camp. You’re free to explore this area and check out the lush environment, but look closer and you’ll find a number of little secrets amidst the other things you can do. To help you get the most out of it, we’ve compiled this guide to run you through all of the Minecraft Dungeons Camp secrets and things you can do.

Listed down below, you’ll find everything you can do and check out at your Camp. Keep in mind some of these aren’t secrets in the typical sense, but things you may end up missing all the same.

Your House & Its Collectibles

One of the most obvious camp secrets you’ll want to check out is your house. Unfortunately, there’s not a whole lot to see inside it, especially on the lower level.

However, as you progress through the game, you’ll find that the upper floor’s shelves will begin to get filled out with more collectibles and trinkets from your adventure.

After completing each level in Minecraft Dungeons, you’ll find another new chest is placed somewhere around the Camp area. These are basic wooden chests and don’t look all that special, but open it up and you’ll nab yourself 50 Emeralds.

Unfortunately, these are randomly placed, so you’ll have to do a bit of the hard work yourself tracking them down. They’re never too well-hidden, though, so it shouldn’t take too long.

While not all that exciting, the training dummies are a handy resource for testing your loadout and artifacts before diving into a level.

Walk on over to these and begin attacking and you’ll be able to see how much damage your attacks and abilities will deal to the mobs you’ll face in levels.

Down below we talk about some Minecraft Dungeons Camp endgame content. If you’re looking to avoid spoilers until you’ve finished the game entirely, turn back. For those eager to find out what awaits, continue on reading.

On the same side of your Minecraft Dungeons Camp as the Cathedral, you’ll be able to find what looks like a Nether Portal just to the north of it. It’ll make sounds when you get close, but other than that it doesn’t look active.

Whether this is just a fun little easter egg tucked away in the camp or something we’ll get to play around with as part of a future DLC drop or update remains to be seen.

There’s a super secret chest you can find in the Camp once you’ve beaten the story. Walk around the back of the Nether Portal mentioned above and you’ll be able to make your way up the wall.

Just below the top of the mountain, you’ll reach a point where you’ll have to cross a gap to climb the final bit. Use a roll to cross the gap and make your way to the top. When you do, a secret chest will drop from the sky containing a bunch of Emeralds and some high-level, rare gear.

That’s all you need to know about all of the Minecraft Dungeons Camp secrets. For more on the game, check back with Twinfinite.