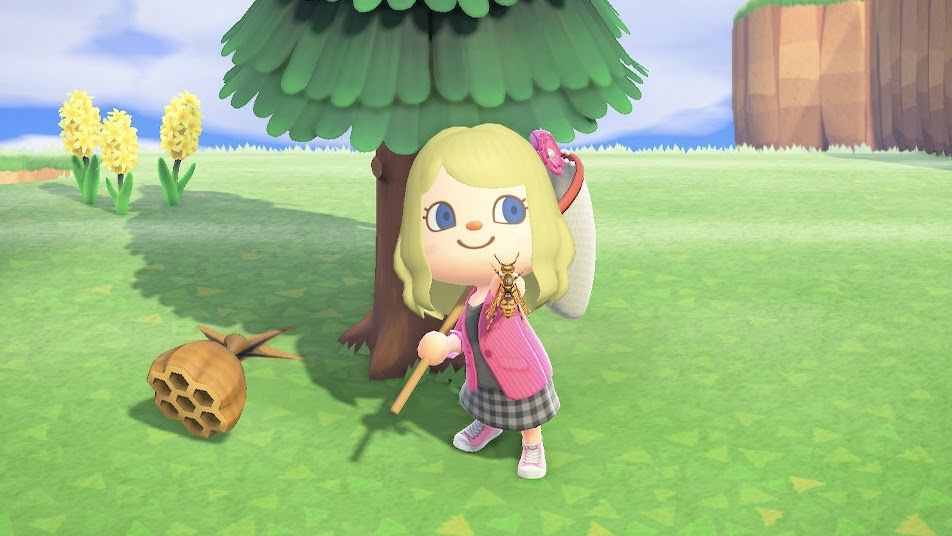 In Animal Crossing New Horizons, there are plenty of different bugs and other creatures for you to find and collect. Some are more elusive than others. If you’ve been wondering how to catch a wasp, we’ve got you covered.

The first thing you need to be able to catch any bug in New Horizons is a net. You can either buy one or craft one. If you still need a net, you can read our guide on how to get one.

Once you have a net, it’s time to start looking for a wasp. Wasps can be found hidden in nests in trees. If you shake a tree by standing next to it and pressing A, there’s a chance a nest could fall out. If this happens, a swarm will start chasing you.

If you don’t catch the wasps with your net, they will sting you, and you’ll need medicine to heal yourself. At this point, it’s too late to catch them.

The trick to catching wasps is to have your net ready while shaking trees. You can hold your net and shake trees with A at the same time. Once you see the swarm, quickly face towards it, and press A again to swing your net. If you time it correctly, you’ll catch a wasp in your net.

Luckily, wasps are pretty common in New Horizons. Each day there will be several nests hidden in any type of tree. They can also be found in the trees on mystery island tours.

Wasps can be found in both the Northern and Southern hemispheres, 12 months a year, 24 hours a day. This means that you can find these bugs at literally any time when playing the game.

You can donate one wasp to your museum collection, so if you’ve already done that, you can sell any you manage to catch in the future.

While wasps aren’t the most profitable bug in New Horizons, they can be worth selling since several appear on your island each day.

To recap, here’s how to catch a wasp in Animal Crossing New Horizons:

That’s all you need to know about how to catch a wasp Animal Crossing New Horizons. For more tips, tricks, and guides, visit our New Horizons guide wiki.