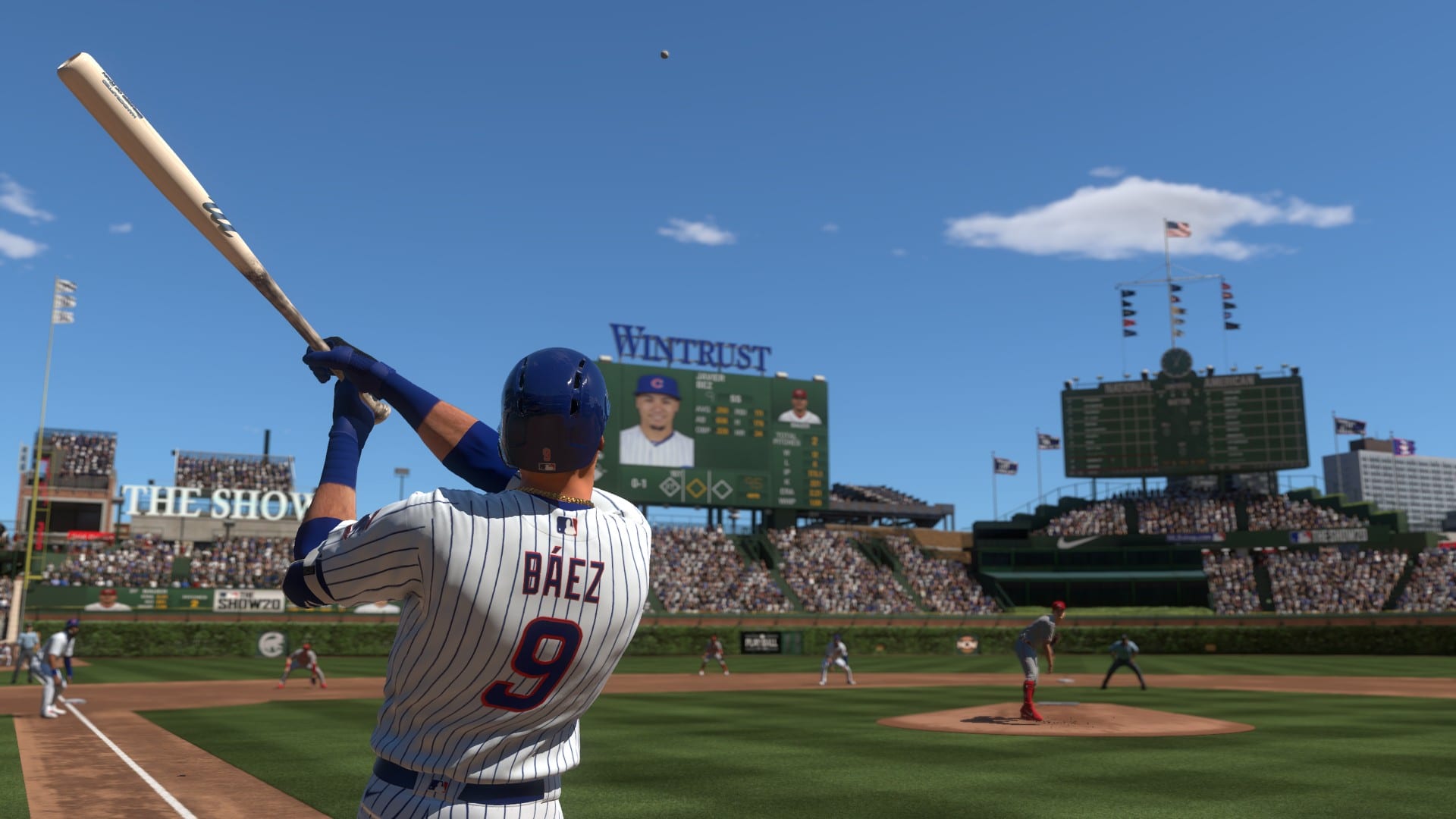 MLB The Show 20 on PlayStation 4

Last year’s edition of MLB The Show was highly impressive. It touched up on and significantly improved/revamped nearly every playable mode in the game and its efforts didn’t go unnoticed by us as it won our award for best sport/racing game for 2019. I have to imagine that surpassing or even at least meeting this same standard for MLB The Show 20 was a challenge for developer San Diego Studio.

Rather than try to top themselves or make radical changes for the sake of making them, the focus this year appeared to be more on fine-tuning and improving the actual gameplay, the baseball that is being played on the virtual field, rather than doing anything too dramatic to game modes. Granted, every year there’s some kind of fine-tuning going on, but this year it feels more noticeable.

The PCI change is quite noticeable. It can now be customized to your liking and provides far more helpful feedback than ever before. First, here’s what it looks like:

There is a lot of useful information being shared in this new PCI. The outer ringed area displays your batters plate vision and the inner displays the contact. Keeping it in within this PCI will help mitigate mistakes with timing (vision) and increase the likelihood of good hits such as line drives over dribblers and pop ups (contact).

With this new PCI you can see exactly what your contact and vision is (rather than an average o the two) so you can more easily see the difference between better and poorer hitters while also seeing how you have to lineup the PCI in order to get the best possible contact and Perfect/Perfect hits.

Those dots in the very center represent the Perfect/Perfect feature. When the dot is bigger towards the top dot, that batter will lean towards powerful, well-angled fly ball hits, while the bottom diamonds will lean towards better contact; hard hit grounders that can penetrate out of the infield and line drives that will more likely split the outfielders.

In my time with MLB The Show 20 prior to release, I felt that with all these tools at my disposal I had more control over the outcome of my hits over previous years where it seemed like I lined everything up perfectly, but the result was something lackluster. At the very least I have more knowledge.

Making hitting more consistent isn’t the only battle that MLB The Show 20 is taking head on this year. Fielding is another area of The Show that San Diego Studio has tried over the last few years to make feel more impactful.

Fielding has always been tricky because you want to make the fielding stats matter (in some older games it didn’t) but you don’t want silly errors overshadowing the rest of the game.

MLB The Show 20 adds subtle changes to outfielders to help defensive stars stand out and behave more realistically without being too gimmicky.

The less sexy additions are the increased movement animations that give certain outfielders an increased chance to get a leg up in a fly ball situation over others that don’t have the same stats. It’s not something you’re going to easily see, but it’s there and it will impact the game.

The other more flashy change is the Extreme Catch Indicator. This is a new red icon that will appear over risky line drive plays that are going to be right on the line of being catchable.

In the past, you would aggressively approach line drives no matter what because there was really only two outcomes. Either you performed a shoe string grab or you didn’t reach it in time and it just bounced in front of you. You could attempt a dive but it was extremely difficult to line up properly and rarely worked. There wasn’t a lot of thought to it.

Now you can use the fielding meter to make split-second decisions. You can decide to surrender the hit and put yourself in a position to easily scoop up the ground ball or aggressively pursue and see what happens (better fielders have a better chance of succeeding). If you get caught in between, you’ll get eaten up by a choppy ball a bit and it might be okay, or it might allow a fast base runner to take advantage and get an extra base.

There’s going to be an adjustment, and not everyone may like it; however, I applaud San Diego Studio for taking some risks when they really don’t even need to, and try to improve on what is a very stable baseball game foundation instead of resting on it.

As far as the modes are concerned, I take great pleasure in reporting that Franchise modes are finally getting some serious love with the addition of two major additions.

First is the ability to to add custom teams in Franchise. It’s not exactly an expansion team mode, which would have just been over the top fantastic, but it’s at least a step in the direction of infusing some fun and creativity into Franchise.

The way it works is that you create a team exactly as you would in Diamond Dynasty and then replace a current team roster and all. That last part kind of takes of the excitement out of it a little (you’re basically just rebranding a current team at that point), but if you go with a fantasy draft or force some trades to mix things up, you can at least emulate the experience of an expansion franchise with your created team, which is what a lot of people have wanted.

Perhaps the biggest news of all: full Minor League rosters are in the game from day 1. No longer will dedicated community members have to spend tens and maybe even hundreds of hours having to recreate the rosters from scratch using created players. Every Minor League team is loaded with their real-life roster. Yes, even Tim Tebow is there.

This is a big deal for Franchise mains which would usually wait weeks for the community to complete the custom roster in order to have a proper experience that allows players to fully leverage the entire roster of players at their disposal, not just the Major League ones.

Finally there is the return of Online Leagues. I hesitate to loop this in with the Franchise improvements because… it’s not really a franchise.

Custom Leagues are one-off leagues that, to their credit, give you a lot of ways to create a season with friends and set it up exactly the way you want with lots of options. You can even create a league that lets you and your friends use your Diamond Dynasty rosters instead –an unexpected but welcome addition.

The main issue is that there are no minor league teams to call up from and offseason management whatsoever (drafts, free agency etc.) because it doesn’t exist. Custom Leagues are purely just season that you start and then eventually finish with your friends. Only humans can play and there’s no options to throw CPUs into the mix.

Ultimately, the addition of Custom Leagues is a net positive and it’s better to have this iteration over the nothing that has existed since Online Franchises were removed, but San Diego Studio has some work to do to make Custom Leagues more interesting.

Diamond Dynasty was completely overhauled last year to include new types of programs, moments and reward systems. All of which combined to greatly enhance the mode. I wouldn’t expect San Diego Studio to mess with that too much, at least not until the next-gen… and that’s pretty much what happened in MLB The Show 20. There are new features though, of course.

Showdown is a new game mode that exists within Diamond Dynasty and joins Conquest and Battle Royale as an alternate way to play.

Showdown plays like a combination of Moments and Battle Royale. You draft an initial team and then use that team play against the CPU at varying degrees of difficulties in various Moment-like scenarios.

You don’t know all of the challenges you’re going to face from the get go, but you do know that eventually you’re need to go into a “Showdown” with a high OVR pitcher at the end of it to claim the highest level of rewards. You’ll have a certain amount of outs to score a certain amount of runs or you lose.

The bottom line is that Showdown is fun, if not a little strange like some of the other experimental game modes San Diego Studio has added over the years like Conquest (which is back and has a few new positive tweaks as well).

It feels too skewed towards hitting, making me wonder why I would want to invest too heavily in pitching. There are pitching-based challenges, but ultimately victory will come down to hitting. I would have preferred to just have had separate hitting and pitching showdowns that highlight both sides of the ball, but it’s a good start if San Diego Studio intends to keep the mode around like they have with Conquest and Battle Royale.

RTTS and March to October are in similar spots as Diamond Dynasty. The changes this year feel a bit more conservative but they are positive ones.

March to October continues to be highly immersive and exciting experience that plays very similarly to last year. The big difference is the ability to now influence roster moves such as trades and call-ups to shock some life into your season if needed. Also it’s more fair with its rewards; offering rewards at various points during the season with the quality dependent on your difficulty (which now includes Dynamic).

RTTS is operating under a similar, low-key, deal. Player relationships can now be developed on the field as well as you build rapport together and challenges have been reworked to be more rewarding, more realistic, and allow more player input into what they want to go for, and what they want to improve or gain. And, of course, RTTS benefits from the addition of Minor League players as well.

It’s the kind of stuff that’s great, don’t get me wrong, but it’s not really going to attract people who don’t play the mode to give it a try like say, the Diamond Dynasty rework of last year, or this year’s Franchise mode additions. But they are additions that will certainly please people that already enjoy them.

MLB The Show 20 charters a different more sustainable path of focusing on the things that needed more love, rather piling more onto the game modes that regularly get more attention.

The result is a game that feels very balanced across all game modes, is loaded with things to do, and is well set-up for the future as every mode feels like it’s in pretty decent shape now. There is something for everyone whether you want to play offline or online, alone or with others and it leaves me wondering yet again how San Diego Studio will try to match or outdo themselves next year.