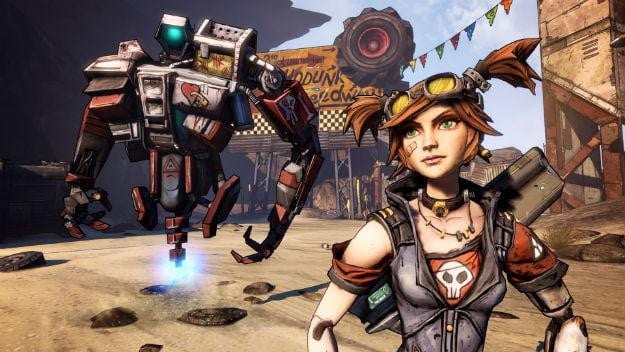 The second DLC pack for Borderlands 3, titled Guns, Love and Tentacles, is finally here, and it’s brought with it a doozy of a story incorporating beloved characters from across the franchise. One, in particular, is Gaige the Mechromancer, and if you’re a bit hazy on who she is, we’re here to help with a guide breaking down who Gaige is in Borderlands 3.

Note that this guide does go into light detail on the start of the DLC, so if you’re reading this before diving into the game, be warned that there are *Spoilers Ahead*.

Who is Gaige in Borderlands 3 Guns, Love and Tentacles? Answered

While Gaige didn’t make an appearance in Borderlands 3 before Guns, Love and Tentacles, she’s been a part of the series since Borderlands 2.

Alongside Krieg the Psycho, she was one of the game’s DLC Vault Hunters released after the game’s launch. She boasts the ability to control a Deathtrap unit of her own making, allowing her to attack enemies from a safe distance while also distracting them from attacking her own person.

As for her backstory, it’s a bit unusual. In addition to being a genius with robotics, she has a robotic arm which she modified herself with for fun. She’s also one of the younger Vault Hunters in the series, coming to Pandora while she was still only a high schooler.

The reason why she came to the planet is because she needed to avoid the authorities on her home planet, Eden-5. During a science fair where she showcased her Deathtrap unit, a bully shoved her and was subsequently attacked by Deathtrap, leading to their death.

With the help of her father, she was able to sneak off the planet and away from the authorities, and has since taken up hunting for Pandora’s Vaults while echo-casting her adventures.

What Gaige’s Role Is in Guns, Love and Tentacles

What Gaige has been up to since Borderlands 2, though, hasn’t really been detailed; or at least, it hadn’t until Borderlands 3: Guns, Love and Tentacles released.

Between the second and third games, Gaige gave up being a Vault Hunter to pursue a career in wedding planning. This led to her becoming the wedding planner for Hammerlock and Wainwright’s wedding, and though a slew of cosmic horrors stand in the way of the wedding taking place, she’s determined to make it happen with your assistance.

Hopefully, this cleared up who Gaige is in Borderlands 3 Guns, Love and Tentacles. For more on the game, check out some of our other guides covering what the new level cap is and who Timothy Lawrence, a character who takes center stage in Borderlands’ first DLC expansion, is.

Borderlands 3 Fantastic Fustercluck: Who Is Krieg? Answered
Kingdom Hearts 3: Who Xehanort’s Voice Actor Is
How Old Matt Sato Is