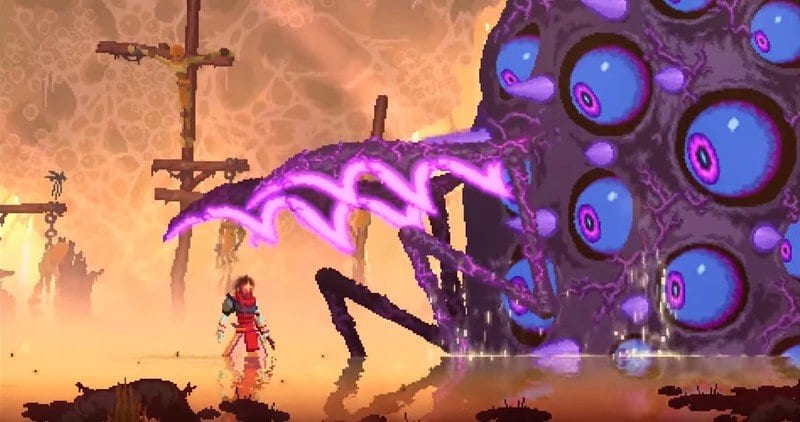 After over a year since Dead Cells came out of its early access phase, Motion Twin is finally releasing its first official paid DLC for the game: The Bad Seed.

The developer has released other hefty content updates for the game prior to this, including Rise of the Giant, which introduced new biomes and enemies. However, The Bad Seed is shaping up to be Dead Cells’ most massive update yet, and it’s starting to look brutal.

If you, like me, have been neglecting to keep up with Dead Cells for the past year or so, you might be a little concerned to know that a ton has probably changed since you last played the game. For instance, frost weapons have been nerfed slightly, and it’s not quite as easy to just cheese the game by freezing all your enemies or using your Tactics turrets to clear out an entire room while you stay out of harm’s way.

That said, like most other rogue-lite games, once you spend a little bit of time reacquainting yourself with the world of Dead Cells, you’ll be back in good form in no time at all. Here are a few tips to help prepare you for the Bad Seed DLC.

Re-familiarize Yourself with the Three Stats

Dead Cells feature three main stats you can level up: Tactics, Brutality, and Survival. The general strategy remains the same; you should focus on leveling up only two stats for most of your playthrough, and then start taking scrolls for the third stat towards the end, when you need a bit more of a health boost.

In addition to that, it’s also worth noting that the scaling for some of the equipment has changed, so not all your favorite weapons might scale with the stat it used to. Continue experimenting with the different pickups you get during your runs and get a feel for a loadout that you’re comfortable with.

Get Used to Dealing with Poison

One of the new biomes, the Swamp, has been described as a “noxious environment,” which means that you’re probably going to be dealing with a lot of poison attacks and effects. It might sound painful, but I’d recommend going through the Toxic Sewers and Ancient Sewers route just to get a feel for how poison works in this game, and so that you can prepare for it.

The good thing about the Bad Seed DLC is that it likely won’t be quite as difficult as you think, considering that the two new biomes are early game areas, and Motion Twin has stated that the boss difficulty will be on par with the Concierge.

With that in mind, it could be a good idea to practice against the two vanilla early game bosses, the Concierge and Conjunctivitis. That should give you a good refresher on the general boss difficulty of the game for when the DLC drops.

If you played a ton of Dead Cells when it launched and cleared the game multiple times, chances are good that you’ve probably already unlocked one or two boss cells to increase the game difficulty.

Playing on a higher difficulty is great, as you can amass tons of cells in a single run and level up quickly. However, your healing also becomes limited, and you die extremely easily.

This might seem like a bit of a no-brainer, but if you’re popping back into the game after a long hiatus, make sure to check that you don’t have any boss cells activated, or that’s just going to demoralize you.

Dead Cells is now available on PS4, Xbox One, Switch, and PC. The Bad Seed DLC is set to release on Feb. 11.