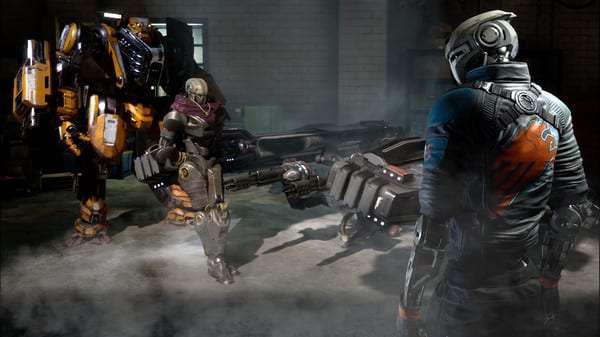 Disintegration, which comes from a studio co-founded by an ex-Bungie dev, might look like a pretty straight-forward first-person shooter but it actually plays unlike anything else.

The game’s not due to release until later in the year, complete with many more maps and a full single-player campaign, but I’ve had some hands-on time with the closed tech beta to see what it’s all about.

As a pilot of a Gravcycle, you’re dodging and weaving around the post-apocalyptic map, taking on opponents (who have Graycles of their own).

Each one moves in the same way, using the left trigger and shoulder button to move up and down, and you get to choose between seven different heroes, Overwatch style, with each having their own durability, handling and speed stats, and different weapon types.

There’s Lost Ronin, who’s quick but harder to handle than others and has an accurate burst weapon; Warhedz uses remotely detonated sticky grenades; and my personal favorite, The Business, is an all-rounder who pairs a mini-gun with an immensely powerful shotgun attachment.

Before the final release, the roster could do with some balancing, with a couple seeming to be far more powerful than others. Aside from that, gameplay gripes are few and far between.

Right now, it’s fun to work out which character fits your play-style better and what team make up is the best. You’ll need agile heroes that buzz around the battlefield, but slow and durable ones can be helpful for hunkering down and protecting capture points as backup approaches.

That stuff’s only part of the story though. Disintegration may be part first-person shooter, but it’s also part RTS game. As well as a Gravcycle to pilot, you also have two ground units to control, one mech and one soldier.

You can position them in the right place to capture points and flank enemies, or you can direct them to attack specific targets. They’re not just distractions either. If you make good use of their individual abilities, they can turn the tide of a battle.

With your own three abilities, a ship to control, and two units to direct, there’s a lot to think about, but that makes Disintegration a lot of fun as you’re getting used to it.

There’s not much to think about in the way of tactics – it’s little more than “capture these points and fire at these enemies” – but it’s fun to play, which is a good start.

Even though these gameplay differences are cool, none of them make up for the fast that Disintegration is as generic as generic can be in pretty much every other way.

A lot of the issues hit you right from the start. While the Gravcycles feel responsive in combat, get away from the action and they’ll feel painfully slow.

As you fly through treacle towards the warzone, it just doesn’t feel right. There should be more zip and flair to the Gravcycles, allowing you to turn combat into dogfights. As it is, you could be piloting a lumbering mech, it doesn’t really feel any different.

If anything, the mechs in games like Titanfall feel more like agile weapons of destruction than Disintegration’s Gravcycles.

The other big issue is that Disintegration is completely devoid of atmosphere and personality. Aspects like the intro to a match being without music and maps being pretty bland could be down to the game being far from complete, as V1 Interactive has made clear, but there are design issues too.

There’s no reason to be invested in the setting, characters, or objective. Aside from their weapons and how they look in the character select screen, there’s nothing to differentiate the heroes.

Games like Overwatch are as popular as they are because fans connect with who they’re playing as, picking a main not just because of how they play but because of how good their personality is.

There’s little to see in matches, at least on the maps I’ve played so far, that tells a story.

Maybe the campaign will help with that, but the multiplayer should be able to provide at least a bit of motivation to care. After all, some players will jump straight into multiplayer without ever even touching the campaign.

Aside from balancing, which will be worked out over time, the speed of Gravcycles, and it being easier to fight from range than dive deep into the action, Disintegration is promising from a gameplay perspective. It’s unlike any other shooter and the RTS components open up so many opportunities for interesting game modes.

The issue is that it’ll need more than that to stand out this year. The likes of Call of Duty are all about spectacle, while Borderlands and Overwatch are steeped in personality. As it stands, Disintegration has an interesting premise, but nothing else, making it interesting but feel behind the first-person shooter times.

Framerate, balancing, and visual complaints are almost to be expected from a beta, particularly one this early. Disintegration actually does better than expected in those areas, but style and vision is what a beta should make more of than anything else, and that’s unfortunately not the case here at all.

Disintegration’s tech beta will be open from Jan. 31 to Feb. 1, so let us know what you think in the comments down below.