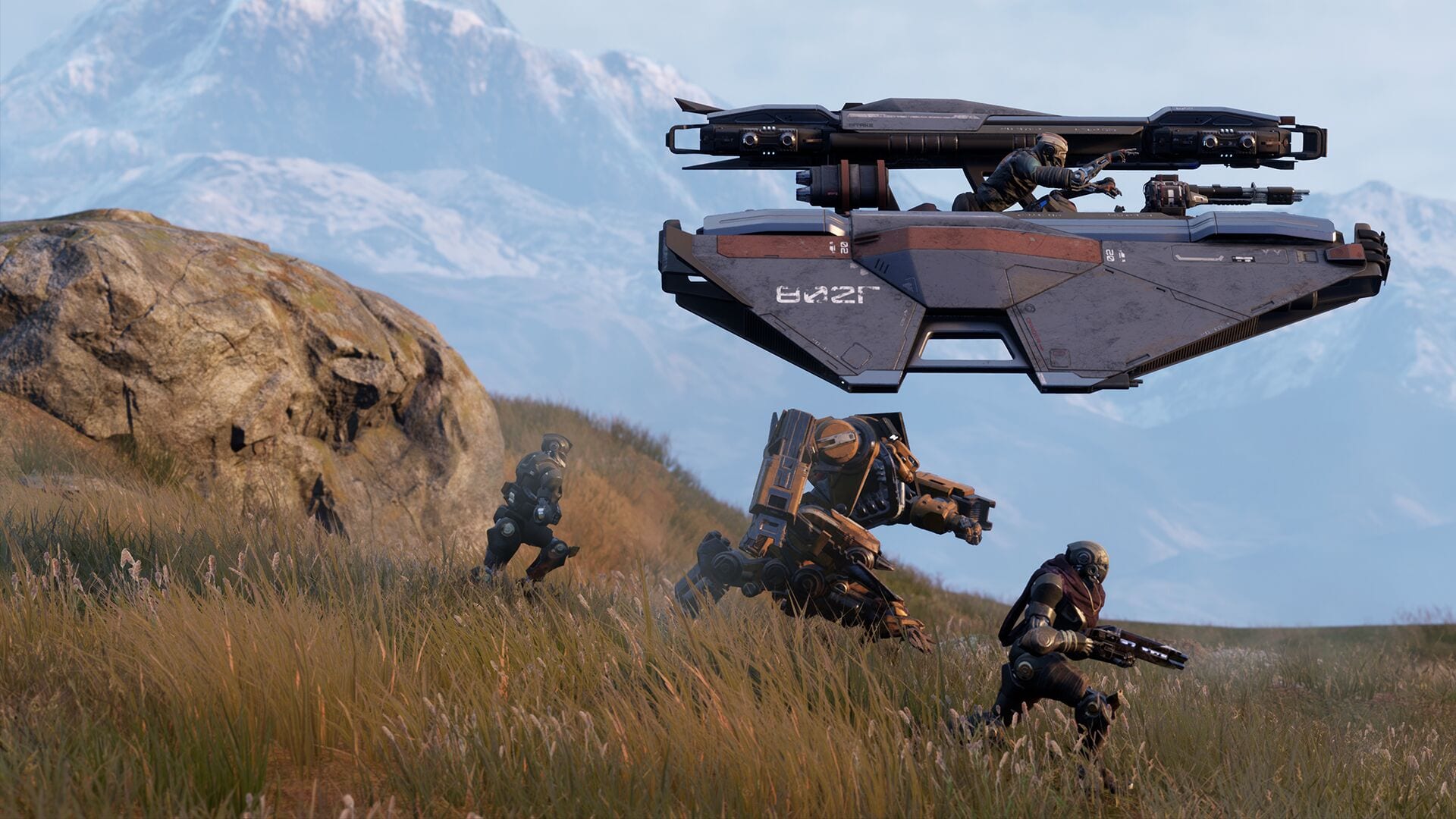 Marcus Lehto is synonymous with modern first-person shooters thanks to his work on Halo. Who are we kidding: he did to the modern FPS what John Romero did to the retro FPS via Wolfenstein 3D and Doom. And, if my time with Disintegration is any indication, Lehto might make lightning strike twice.

Before I get into the demo, however, I should provide some context for what I experienced. Basically, I participated in a new spin on the classic capture the flag game mode. Instead of both teams trying to capture each others’ flags at once, one team was tasked with capturing the flags —actually large power cores— and the other team had to protect the flags. After a few minutes, the teams switched jobs, and the chaos began anew.

During the multiplayer demo, I teamed up with four other players to partake in some sweet 5v5 action. Better yet, I got to try most of the game’s multiplayer classes. I would have used all of them, but Disintegration enforced a modicum of balance by preventing more than two players from choosing the same class on one team.

Now, each class includes its own weapons, stats, and minions. Okay, maybe they’re more than just “minions” since they feature unique abilities, come in a variety of shapes, include their own stats, and are technically squishy human brains locked in robot bodies; but my teammates called them minions, so I’m sticking with that term.

Rant aside, you couldn’t pick up flags on your own; you needed minions to do the dirty work for you. However, they’re far from disposable, since you needed to keep them alive and escort them to drop-off points. If you were a bad commander and the minion carrying the flag died, the dropped flag exploded if not picked up after a few seconds. Sounds fun, right?

The answer, of course, is yes. Disintegration’s take on capture the flag, combined with its FPS/RTS gameplay was very, very fun. That is, of course, if you didn’t play the game like a modern FPS title.

At first, I had a bit of difficulty effectively combating other players, but that stemmed from not taking my own advice and approaching Disintegration like a normal FPS game. However, as soon as I wrapped my brain around the game’s mechanics, I started racking up the kills. I didn’t even mind that Disintegration’s version of iron sights was awkwardly mapped to pressing down the right analogue stick and not the more common left trigger; that button was busy controlling the gravcycle’s altitude.

When I started the demo, I assumed that my character’s gravcycle would turn me into a floating robo-hummingbird of strafing death. That assumption cost me many lives, half of which were my minions’.

Despite the name, Disintegration’s gravcycles are not fast. They can strafe like nobody’s business, but the sense of speed that comes to mind with the suffix -cycle doesn’t exist in the game. In Disintegration, slow and steady wins the match.

I’m of two minds about Disintegration’s slower combat because on one hand, you’re forced to actually think about your tactics, and charging in like Leeroy Jenkins will leave you as dead as, well, Leeroy Jenkins. Speaking from experience, mind you.

On the other hand, I always defaulted to trying to dodge and juke enemy attacks because most modern FPS games emphasize twitch-based combat. But, once I abandoned most of what I know about modern FPS games and treated the game like its own beast, I started to conquer my enemies.

While Disintegration is part RTS, I didn’t have to worry about micromanaging my minions (or building them in factories). Disintegration’s minions had enough artificial intelligence to follow me, attack enemies on sight, pick up flags, and then make a beeline for the drop-off point. However, that didn’t mean I had a chance of winning if I didn’t utilize my minions properly.

Disintegration’s RTS mechanics are simple, but they’re also efficient. All you can do is command minions to head towards certain locations and use abilities, but those two powers go a long way.

I can’t recall how many times a well-placed missile barrage decimated enemy teams during the demo, but I also can’t remember how many times I tried to use that ability and failed because the minion associated with the barrage was dead. However, when I kept my minions alive and synergized with my team, we wiped the floor with mops made from the scrapped corpses of our enemies.

However, Disintegration’s ability implementation was not flawless as you need to target a location with a beacon before a minion can use an ability. You can’t attack while aiming the beacon, which left me open to attack far too often. Moreover, I sometimes panicked while aiming and missed, but that’s just how the game is balanced; aiming the beacon, on the other hand, was problematic.

Sometimes, my beacons got stuck in walls and terrain, and sometimes they didn’t. Some beacons snapped to enemies; others didn’t. Maybe it would have been easier to aim beacons with a mouse and keyboard, or perhaps the beacons need a bit more work.

Now, I am not a competitive gamer. I haven’t played an FPS multiplayer game in a long time, but somehow I held my own when I stopped treating Disintegration like Halo or Call of Duty and more like Brutal Legend.

Out of the multiplayer demo’s six classes, I fell in love with the samurai-like Lost Ronin and Mad Max-inspired Warheadz classes since they are nothing but pure, unadulterated weapons and explosions.The Lost Ronin is a beginner-friendly, jack-of-all-trades DPS class that only exists to kick ass and chew bubble gum, and it’s all out of gum. As for the Warheadz, it’s basically a tank class that can take a beating and deliver it back tenfold.

Word of advice, future Warheadz players: the class includes a one-use nuke that is slow to charge and even slower to land. However, if you aim it at the ground, smack dab in the middle of a gaggle of minions, you will turn them into scrap metal faster than it takes you to laugh maniacally at all the multikill badges that flash on the screen. Warheadz might control fewer minions than any other class and is only slightly more maneuverable than a treadless tank, but its extra health and kaboom is well worth the sacrifice.

Aside from a glitch that made my controller rumble until someone restarted my game (which is apparently a known issue), my Disintegration experience was flawless and left me smiling. While I can’t speak for the single-player campaign, the multiplayer is a solid mix of fast, twitch-based FPS combat and a simple but solid thinking man’s RTS minion management. The game will punish you if you treat it as one or the other, but when you marry your FPS skills and RTS tactics, you will find yourself enjoying this unique game.

Disintegration is scheduled to release in 2020 on the Xbox One, PC, and PlayStation 4.