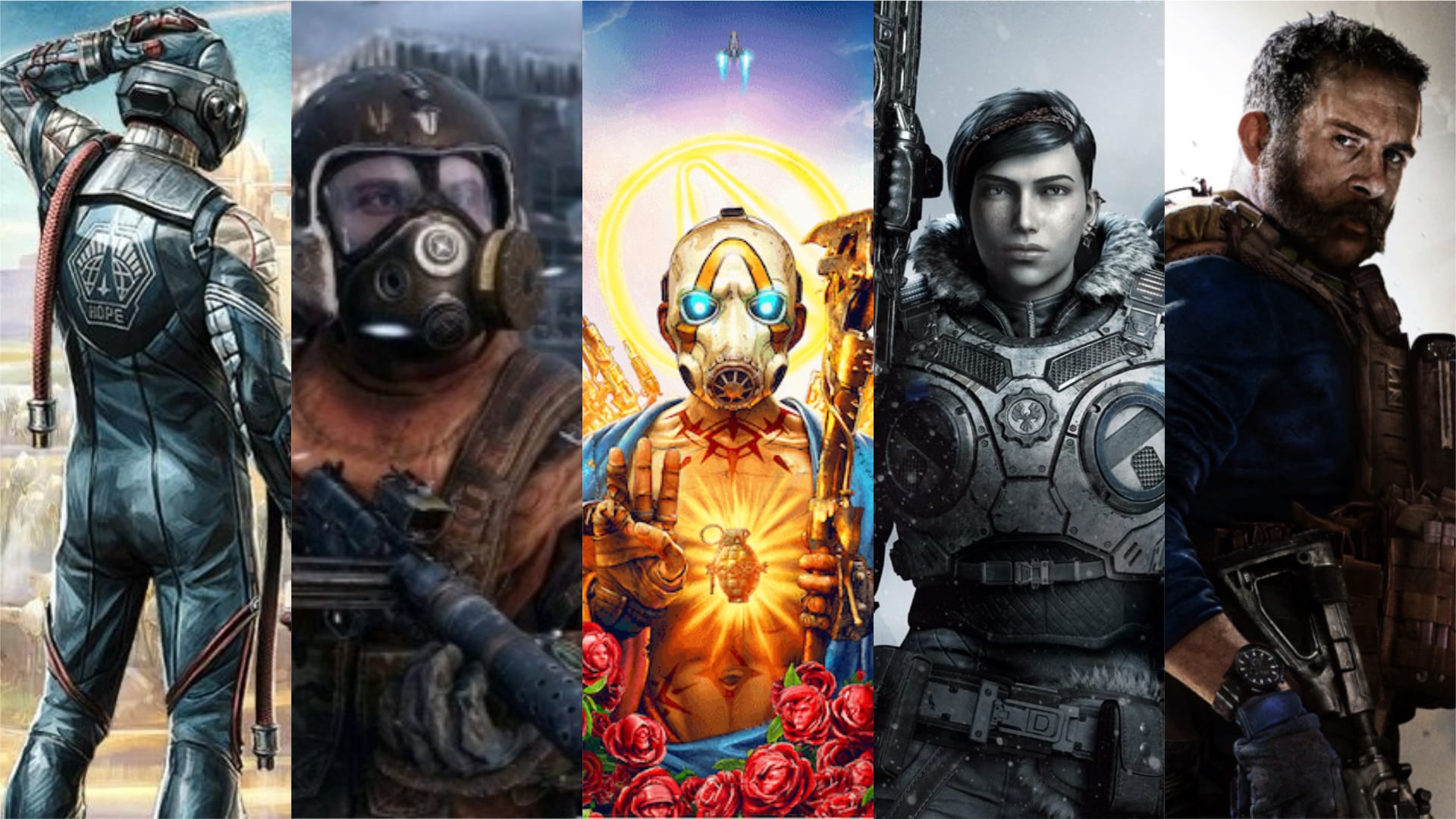 It’s finally award season here at Twinfinite! Over the month of December we’re going to look back at our favorite games of 2019. That includes the wealth of strong shooters the year has seen, from the field of modern combat to space-faring adventures. These are the best shooters of 2019.

Voted on by our editors, these were the shooters that stood apart from the pack. We considered both first-person and third-person shooters, so let’s take a look at the best of the year.

Deputy Guides Editor Tom Hopkins: Venturing out of Moscow’s tunnels and into a semi-open world was a great thing for the Metro series. While the larger areas weren’t as creepy and atmospheric as the dark corridors of the earlier games, Exodus is a much more impressive and well-rounded shooter.

Not only is the actual combat a lot of fun, but Exodus incorporates crafting and gear maintenance in both the open world and more linear sections. You have to think about a lot more than spiders jumping out at you and killing all the bandits.

With you having to pump up the pressure in some weapons, craft more ammo, and keep guns clean, Metro Exodus isn’t a simple case of point and shoot, making it a big step forward for the series and a standout in the shooter world.

Add to that the impressive world and emotional story full of interesting characters and Metro Exodus is one of the best shooters of 2019.

Senior Editor Hayes Madsen: The Outer Worlds is a brand new IP from Obisidian, the makers of Fallout New Vegas, but with one key difference; it has much better shooting.

While more RPG than shooter, Outer Worlds features some tight gunplay that gives you access to a wide array of different weapons, both melee and ranged.

Across the game you can use assault rifles, pistols, shotguns, and more, all of which can also cause different types of elemental damage, like shock. Scaling difficulties also let you fine-tune the experience how you see fit, adjusting the aggressiveness of enemy AI.

What makes The Outer Worlds a really fun shooter, however, are the utterly ridiculous science weapons and companion abilities. A shrink ray lets you turn enemies into miniature versions, while a companion like Felix hits the enemy with an absurd dropkick in the middle of battle.

The Outer Worlds is an RPG through and through, with plenty of dialogue choices and exploration, but it has the shooting chops to back it all up.

Editor-in-Chief Ed McGlone: Borderlands 3 is a game that didn’t really change much from its predecessor.

For many gamers that is perfectly fine, but if there’s one aspect of Borderlands 3 that feels remarkably better than previous games it’s the action and shooting.

Borderlands 3 ups the chaos in so many meaningful ways. The skill trees are more diverse, and filled with incredibly overpowered combinations that make players feel unstoppable.

Coupled with insanely powerful and broken guns that let players do silly things like fire off non-stop grenades and rockets, Borderlands 3 is just pure insanity and it’s better off for it.

While it lacks the gameplay depth, or the story content that games higher on this list have, there’s no doubt that some of the highest quality shooter action you can find this year is packed within Borderlands 3.

Guides Editor Chris Jecks: Gears 5 has been one of my personal favorite games this year. While I’ve been an avid fan of the series since the very first title all the way back in 2007, what resonated with me most about Gears 5 wasn’t the ways in which it clings to its heritage, but the way it wrestles free of the shackles of dreary, grey corridors, claustrophobia-inducing level design, and the regular assortment of multiplayer modes.

It’s the campaign where Gears 5 really shakes up the series’ formula. No longer are you consistently confined to a series of corridors and slightly more open rooms or areas for skirmishes. Instead, Gears 5 takes a half-step into a more open-world design.

Featuring a sprawling desert-like area, and a separate blizzard-battered, icy region, Gears 5’s campaign is far greater in scope and, as a result, one of the most immersive in the series thus far.

Venture off the beaten path and you might find a side mission to help some Lost Outsiders, or a Relic Weapon that takes one from the standard arsenal and gives it a special ability to make it lethal in the right hands.

Add on top of a spectacular narrative as Kait uncovers her family history and the Swarm continue to attack humankind, and the ability to play it all in three-player co-op, and you’ve got a fantastic adventure to embark on.

Then you’ve got the multiplayer side of things. Gears 5’s PvP Multiplayer modes are as compelling as ever, and with tweaks to how particular weapons like the Lancer handle, the array of weapons feels far more balanced.

The Tour of Duty system, while not perfect, provides a progression system for players to unlock more cosmetics and rewards, while matchmaking proved to be lag-free and silky smooth.PvE hasn’t been forgotten about, either.

Gears 5 keeps the Horde mode largely the same as it was in Gears of War 4, which is perfectly fine since it was already pretty perfect. It’s the new ‘Escape’ mode that really rounds out the package.

Players can build their own Swarm Hive, adding in enemies, weapon drops, time limits and dead-ends for others to find their way out of. You can take on community-created content, or play through developer-made maps instead. Both of which can be done on your own or alongside friends.

It’s the perfect, bite-sized PvE complement to the much heftier and longer-lasting experience to be had in Horde. At the heart of all of these various modes is the tight, cover-based combat and controls synonymous with the series. New weapon types help to add some much-needed variety, and open up a whole new avenue of tactics and strategies to use against your opponents.

Oh, and Gears 5 looks insanely good at 4K 60FPS on an Xbox One X or capable PC, which just makes the epic story and gory gameplay all the more immersive.

Gears 5 stopped playing it safe and as a result has helped drag the series to the present day. Its wealth of multiplayer options and replayable campaign make it one of the finest third-person shooters you can play this generation, and one of the best shooters you can pick up this year period.

Deputy Guides Editor Tom Hopkins: Even after the success that was Black Ops 4’s Blackout mode, Infinity Ward chose to go back to basics by bringing the single-player campaign back to the Call of Duty series and dropping the battle royale mode.

The Modern Warfare name alone brought the hype, but it needed to bring the quality to make the change in focus worthwhile. Thankfully, it did.

While there were some messaging issues, the campaign is the best Call of Duty series has seen in years. The bombastic setpieces remain and the story has plenty of nostalgic moments to excite longtime Modern Warfare fans, but it’s the slower, smaller-scale moments that impress.

Creeping through London town-houses to find terrorists showcases how the series is unrivaled when it comes to presentation and atmosphere. Missions are incredibly tense, and infiltration has the potential to replace large scale warfare as the focus of Call of Duty’s single-player modes in future installments.

Then there’s the multiplayer to jump into. We all know that Call of Duty’s shooting mechanics are among the best out there, but Modern Warfare streamlines the progression and customization to make it easier to jump into and play for hours and hours.

Leaving the multiplayer focus behind was a risk that paid off, with Modern Warfare being a true step forward for the unstoppable series.