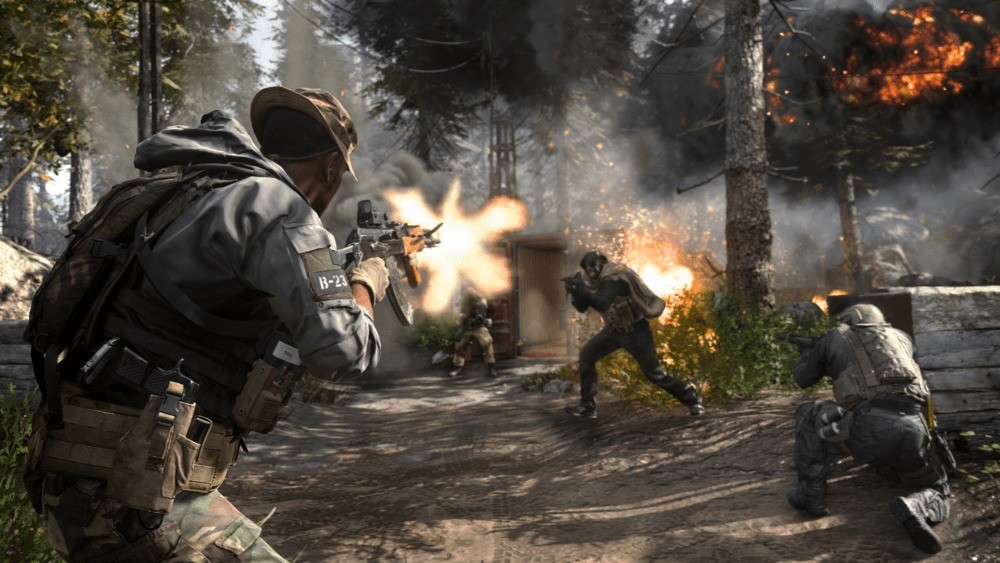 Trying to nab some of the battle royale buzz from PUBG and Fortnite with Call of Duty Black Ops 4’s Blackout mode, while dropping the series staple single-player campaign, was a bold move. Modern Warfare, which is a reboot in naming terms but a sequel in nature, reverts to type, complimenting the usual suite of multiplayer modes with some co-op missions and a brand new story.

As you’d expect, the removal of Battle Royale does make the multiplayer portion feel like a step backwards from Black Ops 4 but, thankfully, the campaign does enough to pick up the slack.

While there have been some highlights in previous years, such as CoD 4 and Infinite Warfare, some Call of Duty campaigns have been little more than short popcorn flicks full of cliched characters and dramatic set-pieces.

Modern Warfare doesn’t completely lose that set-up, with fast-paced airfield or town square firefights being littered through the six-hour runtime, but it isn’t afraid to slow it down and show how a Call of Duty campaign can use its strengths in different ways.

Modern Warfare’s missions are far more varied than usual. Those bombastic set-piece missions are woven between three or four smaller scale raid/infiltration missions that put an emphasis on atmosphere, shock value, and realism.

Whether it be crawling through a Russian controlled town in an attempt to escape or creeping through the four floors of a London townhouse in the dead of night with Captain Price by your side, Modern Warfare can be even more intense when it takes it slow and forgets about the fighter jets and explosions.

The success of these missions is in no small part down to Modern Warfare’s impeccable design and presentation. Of course, there’s a budget that allows for it that other studios can only dream of, but Modern Warfare’s visuals and basic mechanics are beyond anything I’ve seen before.

We all know that Call of Duty’s gameplay is top tier – that’s why it’s become the success it is today – and that Infinity Ward and their peers can do spectacle like few others, but Modern Warfare shows that the quality extends to the detail.

From the way your AI squadmates move as you slowly follow them up a tight staircase, to the incredible explosions when you call in a drone strike, Modern Warfare is very impressive.

The quieter moments also show how Call of Duty could switch up the first-person shooter formula going forward. Bombastic set-pieces are not all that makes the series exciting. The intensity of these raid missions are the perfect way to show off Call of Duty’s strengths and add variety to the game.

Modern Warfare’s story takes some risks too. From the reveal earlier this year, Infinity War has insisted that the campaign wouldn’t hide from the atrocities of modern conflicts, and that’s certainly the case.

Some of the particularly shocking moments aren’t presented in quite as thoughtful a way as they should be, with them being used more as horrific imagery than to bring up important subjects or even develop the plot.

Other moments may simply hit too close to home for some people. An early mission portrays a terrorist attack on London’s Piccadilly Circus and is unsettlingly realistic. Then, later on there are some other torture scenes that are equally uncomfortable.

For some people, it’ll be too much. For me though, while unsettling at times, the themes that Modern Warfare’s campaign explores added real weight to the story and makes is stand out from the competition.

It’s a lot more than a globetrotting romp through war-torn locations. It’s not without those tendencies, that’s for sure, but the confidence with which it tackles the serious themes makes the campaign one that you want to stick with.

Modern Warfare’s contained story is one of the best in recent years too. The two playable army men characters, Alex and Kyle, are cookie-cutter action movie protagonists, but they’re complemented by some genuinely interesting allies.

Captain Price returns – as charismatic as ever – and Farah joins you on a lot of missions as the leader of the Urzikstani Liberation Force. Her motivations are believable, her backstory allows for some interesting and unique missions, and she’s played excellently by Claudia Doumit.

The story isn’t a reboot either, continuing the Modern Warfare series’ story and assuming that players have some knowledge of what’s happened previously.

There’s some great fan service sprinkled throughout too that’ll put a smile on the face of anyone who spent hours and hours replaying the campaigns in MW2 and CoD 4.

One particular repeat of a classic Captain Price line towards the end of the game is a great little moment. The sub-series has come so far but harking back to the origin story will really resonate with fans.

Modern Warfare’s campaign may have a few issues with maintaining a tone and with how it deals with the sensitive subjects it portrays, but the strength of everything else puts it up there with the best that Call of Duty has had to offer in all these years.

As much as the return of a single-player campaign is great, the classic multiplayer is what most players will have picked it up for. Late nights with a pack of Doritos, a can of Mountain Dew (don’t forget your double XP codes), and friends, of course, are where Call of Duty shines.

Modern Warfare’s multiplayer doesn’t do a whole lot new. Admittedly, the core structure and the strength of the gameplay meant that it didn’t really need to, but there’s little to learn beyond the maps, some tweaks to the inventory management system, and what the new killstreaks do.

The inventory management is more streamlined than before, making it easier to switch between weapons and add attachments when you want them.

Then, with your own character level, a level for each weapon, hundreds of camo options, and a variety of Mission Challenges to work towards for Blueprints, there’s plenty to grind for, as there should be in a Call of Duty game.

From the 64 player Ground War mode, which is as close to a classic Battlefield Conquest match as you’re going to get from Activision, to the slow and tactical Cyber Attack, Modern Warfare’s multiplayer has almost everything it needs to succeed.

We already know that it plays phenomenally, with saying anything beyond that the “Call of Duty feel” has never been better being essentially pointless, the sounds of the weapons and explosives really add to the intensity, and the progression system gives you something to work toward constantly. In a lot of ways, it’s better than ever before.

However, it’s also let down in a couple of ways, one of which plays a big part in how matches play out.

Some of Modern Warfare’s maps simply aren’t good. They look great, but the tight streets of smaller maps and more open areas in modes like Domination frustrate in equal measure.

Spawn camping can be a problem that’s impossible to escape due to map design issues and spawn locations being poorly positioned or reluctant to rotate too much.

Multiple times on the Piccadilly and Euphrates Bridge maps in particular, my team got trapped in their spawn with no way of escaping.

The numerous windows, balconies, unprotected streets, and shadowy door frames also promote camping in general. Racing around the maps, SMG in hand, doesn’t work quite like it used to.

Slowing it down, really checking your corners, and even taking up an “if you can’t beat them, join them” attitude is vital is you’re going to succeed.

Also, Infinity Ward needs to make some tweaks to how footsteps are heard. At times, you can hear them from seemingly the other side of the map. In Cyber Attack or Search & Destroy, you’ll be forgiven for thinking that Big Foot is coming around the corner, shotgun in hand.

A lot of the time, the map issues are easy to overlook because of how great almost every other aspect is. Transport the maps of an older Black Ops game or original Modern Warfare to the new game and you’ll have the best Call of Duty experience yet.

As of yet, until some tinkering is done to how meta camping is, you’re going to be frustrated every now and then.

The other multiplayer mode is the return of a standard co-op mode in the form of Spec-Ops. Alongside up to three other players, you play through missions that complement the story of the campaign.

They take place in larger open areas, with you being tasked with things like taking out a few lieutenants or turning on some switches. What most of your time will be spent doing though is manically running around trying to escape the enemies that spawn from pretty much anywhere.

Behind you, from inaccessible places to your left and right, or from what must be henchman making machines inside warehouses, it can be really overwhelming.

When you’ve got a team of four friends who can coordinate properly, it can be a lot of fun. Playing Public Matches is a thankless task though.

The difficulty is high when playing with friends, so it’s unbearable when attempting to play with strangers. You’ll be dying constantly, teammates will leave mid-match, and you’ll occasionally spawn at the beginning of a match while your squad is already halfway through and you need to run to catch up with them.

There’s a PS4 exclusive survival mode too, which benefits from a smaller map but suffers from the same other issues.

Without some actual structure to how you approach the Spec-Ops operations, you’ll be back to the classic multiplayer in minutes.

Modern Warfare’s three modes aren’t quite a case of the good, the bad, and the ugly.

The often dark campaign adds variety that introduces Call of Duty’s potential future and puts it up there with the best the series has ever seen; the multiplayer is as engrossing as ever, even though the poor map design causes some issues; and the Spec-Ops co-op is best avoided if you don’t have a competent and organized squad to play through with.

Should You Buy CoD: Modern Warfare?

If you someone who picks up Call of Duty for the campaign, you won’t be disappointed. Any multiplayer fans will have about as much fun as ever.

CoD Modern Warfare is out now PS4, PC, and Xbox One.

It is developed by Infinity Ward, with support from Raven, Sledgehammer, and a few other studios.