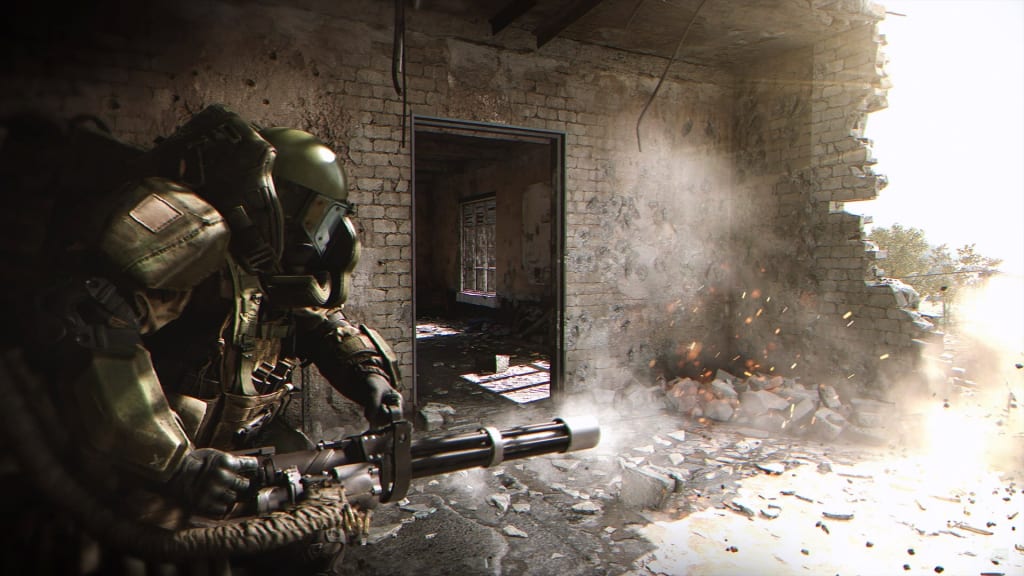 At the end of one of Modern Warfare’s early campaign missions, the streets of London’s Piccadilly Circus were drenched from the illuminations of street lights, and the results of the massacre that had happened a mere few seconds earlier lay before me.

Only a few minutes ago I had been laying waste to the terrorists that threatened this bustling part of the city. Everyone became mere targets in a shooting range.

But as the smoke from the barrel of my gun scarpered, it became apparent that my actions not only ended the lives of many terrorists, but many civilians as well.

If you so desire, the mission can be completed without killing a civilian. For your efforts, an achievement or trophy is awarded.

Infinity Ward is giving you a pat on the back for not going all guns blazing and carefully aligning your shots on targets. It can be a hard feat as the rain of gunfire is spread across all directions.

Judging by the low percentage of players that have unlocked the achievement/trophy (which currently sits at 17.5% on Xbox One), it’s a minority – which is just one of the conflicts Modern Warfare faces with its civilians.

Modern Warfare is the latest in the Call of Duty franchise. Last year’s Call of Duty: Black Ops 4 removed the single-player campaign in favor of focusing on its multiplayer component.

Flash forward to 2019 and Modern Warfare is back, with probably its most intense, bleak and somber campaign yet – but it has a problem.

Throughout the 4-6 hour campaign, many missions present themselves with civilians which can be caught in the heat of battle. The London Piccadilly mission is just one example of this.

Back in 2009, Call of Duty: Modern Warfare 2 saw much controversy with its No Russian scene, in which you played an undercover terrorist who accompanied his ‘comrades’ in an attack on an airport.

Hundreds of civilians could meet their end by your hand. If you so chose to though, you could play the entire level without firing a single bullet.

2019’s Modern Warfare sees fit to incorporate some of these same ideas, but in a more methodical way. Now, with the threat of civilian casualties in a variety of missions, your approach to situations must be slower and more considered.

This, however, is your choice, which is where the main crux of the problem lies.

There is not really a penalty for killing civilians in Modern Warfare. Some missions incorporate playing it safely into the gameplay, but more often than not, the choice is yours.

It’s worth noting that some missions will penalize you for killing civilians. Most notably, the already infamous baby scene, which features a mother clutching a baby in her arms.

By firing upon the mother and child, you will be respawned. Do it three times and you’re booted back to the main menu with the message “are you serious?”

The idea is there, but it’s this confusing contrast that creates the weird relationship Modern Warfare has with civilians.

In past games, situations like this, such as No Russian from Modern Warfare 2, were used to create a moral dilemma for the player.

Here, the situation has evolved into nothing more than into a simple Easter Egg with no long-standing repercussions for your actions. Comments can be seen on a variety of Youtube videos mocking the scene, which goes to show its misinterpretation to players.

By visiting the mission select screen, you are given a letter rank which determines how well you performed with ‘collateral damage.’ Civilians are just ‘collateral damage’ and the rewards reaped from avoiding it is minimal at best (offering a few online XP tokens and character skins).

In an interview with PCGamesN, campaign gameplay director Jacob Minkoff stated that “we have a collateral damage score that we give you after each mission, a rank A through to F score.”

“We talk about ‘unknowns’ – an NPC is an unknown until they prove whether they’re a threat or not. If you kill no innocents and you evaluate all unknowns correctly then you’ll end up with a rank A, and if you kill more than three you will get a rank F.”

While it is true that some missions play out like that, offering you the option to evaluate targets, the remainder of Modern Warfare presents you with the ability for a host of civilians to meet the end by your hand.

No mention of a score is made, with players having to visit the mission select screen to even know it exists and no information is given on how these ranks are determined.

Why is this not highlighted? If Infinity Ward has worked to incorporate this mechanic into its campaign, why not make it easily accessible to players, instead of burying it in the mission select screen?

As mentioned before, some missions mix things up and give you the power to evaluate targets. What this means, is that an NPC who appears to be a civilian may actually be a terrorist and you have to wait before they appear as an enemy and oppose you.

It’s your reactions to these situations that calculate your score, with a higher rank achieved if you’ve killed an enemy once they’ve presented themselves as a threat.

One mission where this is communicated perfectly is a raid on an ordinary suburban household, clearing floor after floor by neutralizing targets. Some characters are inherently hostile, but others will be unarmed and grab a nearby gun to defend themselves – or not.

This is where Modern Warfare’s use of this mechanic shines and several intense moments in the campaign represent this. But this is in stark contrast to previous moments of nonchalant massacres, which clash with this.

Ultimately, it’s confusing what Modern Warfare is trying to achieve with this. Without a breakdown and an accessible way for mission scores to be achieved, it will slip by a large player base.

This is a conflicting choice, especially when Infinity Ward prided themselves on creating such a realistic campaign in the run up to launch. Its tonal inconsistencies, when it comes to when you can and cannot attack civilians, is jarring, and having no breakdown of your actions in each mission is ultimately confusing.

Will it make players react differently to certain situations in the game? Probably not. It’s a step in the right direction and some moments provide genuine moral dilemmas for the player.

When it works, it’s an effective way of communicating the horrors of war and global terrorism. When it doesn’t, it comes across as an over-indulgent mechanic that Infinity Ward has incorporated to add shock value.

With more emphasis on its scoring system and a consistent focus of how civilians are represented would have better showcased its point.

You tried, Modern Warfare. You tried.