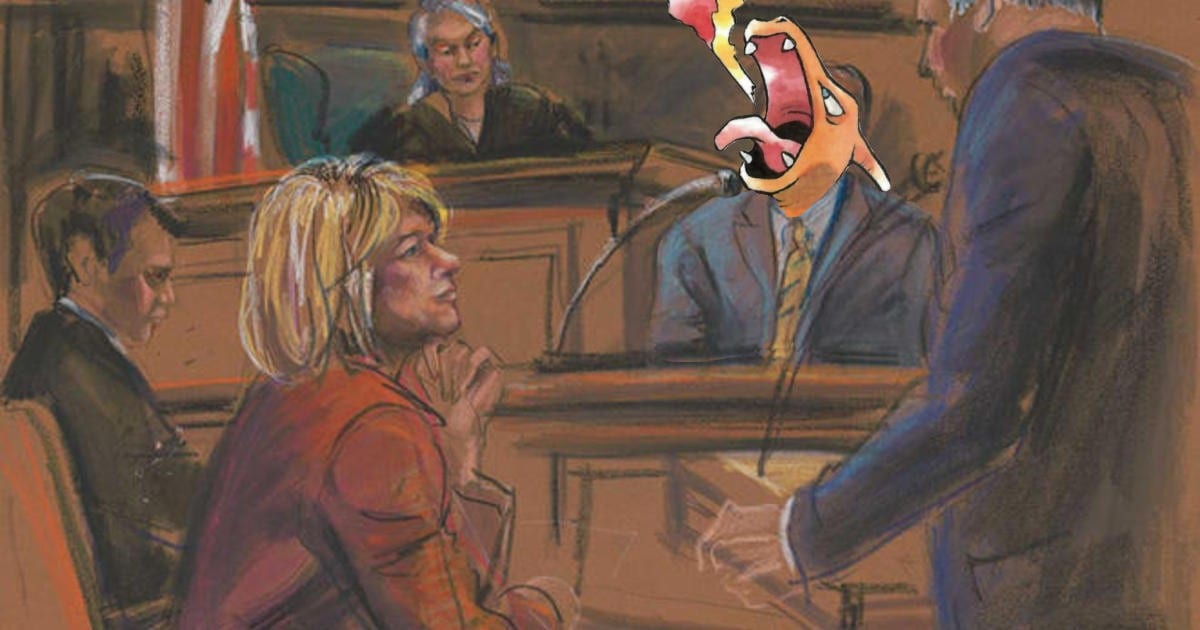 Ladies and gentlemen, the Pokemon world is in a state of upheaval. The upcoming titles, Sword and Shield, have been marred with controversy for months, with legions of entitled passionate fans demanding that all of the creatures from previous generations be granted access to the region of Galar.

Such stunning disregard for the fragile Galarian ecosystem is cause enough for concern, particularly when it is being plagued with the onset of enormous, menacing Pokemon (henceforth “Dynamaxed”) that have grown to roughly twenty times their original size.

It has recently come to our attention, however, that there is a subset of these creatures that take on newly altered forms in this process (henceforth “Gigantamaxed”), and one culprit, in particular, has quite literally grown too big for its boots. It is upon these grounds that we file this writ/subpoena/similar legal-term that we found after a quick Google search.

The defendant, Charizard, has been put at the front and center of Pokemon-related marketing since its debut in 1996. As the cover mascot for Pokemon Red, a certain degree of leniency has been allowed in its rise to prominence, in accordance with its popularity.

However, it has become apparent that there has been undue favoritism applied in this process, affording Charizard lucrative appearances and opportunities that have been denied of its brethren; in particular the plaintiffs, Venusaur and Blastoise.

Gigantamax Charizard is just the latest in a series of injustices from the surly reptile, as Game Freak has seen fit to anoint it as the harbinger of all things wonderful.

This recent reveal has brought back painful memories of Pokemon X/Y, wherein Charizard received two Mega Evolutions, while Venusaur and Blastoise were only offered one each.

Is there no merit to a Venusaur X? Couldn’t Blastoise Y find a role in the metagame? Have we not learned from the wildly successful social media presence of Bulbasaur Propaganda that there is indeed enough room in the hearts of trainers for the other Kanto starters, too?

Though Venusaur and Blastoise are arguably more versatile Pokemon than their fire-type contemporary, they are frequently forgotten and left languishing in obscurity.

Charizard was gifted with a roster spot in the fighting game Pokken Tournament, an honor which was not bestowed upon Blastoise until the Switch port two years later.

Venusaur, notably, was nowhere to be found in Pokken Tournament, passed over in favor of a poisonous toad, an oversized penguin, and a literal chandelier.

This was of course, not the first time that Charizard selfishly left the other Kanto starters behind. When transformations were scrapped in Super Smash Bros for Wii U and 3DS, the Pokemon Trainer was no longer a viable character.

While Squirtle and Ivysaur humbly stepped aside, Charizard would be bailed out once again through sheer technicality, operating as a free agent.

The trio have since reunited, but it is clear from the look on Ivysaur’s face that not all is well. The damage has been done.

More disturbingly, efforts have been made to retroactively insert Charizard into significant moments of history, in what is clearly a smear campaign intended to defame all Pokemon who pose a threat to it.

In March 1997, prolific Pokemon Trainer Red received a Bulbasaur from Professor Oak, and the two have shared a strong partnership since then.

At least, that was up until Pokemon Origins retconned this story in 2013, callously substituting Charmander in its place and repurposing Red with a Mega Charizard X in nearly all future artwork.

When pressed for a quote on the matter, Red merely responded with “…” before challenging us to a battle. As we were only carrying a level 11 Pidgey named Snacks with us at the time for flight-related purposes, we were handily defeated.

We would like to make it clear that we do not want to see fewer opportunities for Charizard moving forward. We would simply like for these opportunities to also be extended to Venusaur and Blastoise at the very least, or ideally, all starters from Johto and beyond.

As trainers, the first choice we make before we commence our journey is which Pokemon we will choose as our ally, a critical decision that will shape our careers and our lives.

Trainers need to make this choice for themselves, but by highlighting Charizard so excessively, impressionable youths are having their minds made up before even fully considering the ramifications, potentially jeopardizing the fate of an entire generation.

In these tumultuous times, balance is required. And the most effective way of achieving balance is by reining in those who would abuse the system, as the defendant has clearly done.

We move for Gigantamax Venusaur and Gigantamax Blastoise to be revealed in short order, and perhaps also Gigantamax Nosepass, time permitting.

The people rest, your honor.