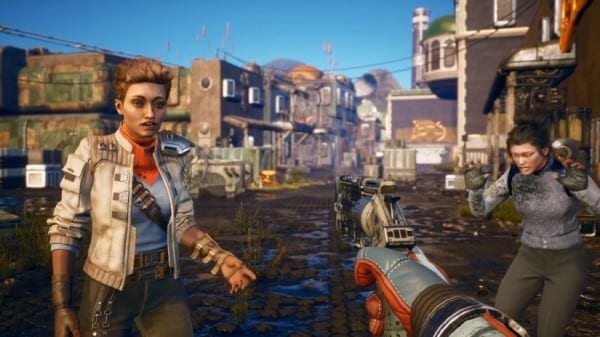 Perhaps The Outer Worlds’ most prominent feature is the way its branching dialog system allows players to shape the outcome of the story. Like Fallout games before it, The Outer Worlds’ starting area tells its own mini-story which climaxes with players making a pivotal choice that has potentially far-reaching consequences. Here’s our opinion on whether to redirect power to Edgewater or Deserters on Outer Worlds‘ first planet, Terra 2.

First, let’s give a little context to this particular decision and remind ourselves of what potential consequences it might have on both Edgewater and your companions.

Edgewater is a troubled town. It’s being run by an administrator who is a company man through and through; Tobson enacts Spacefarer policy to the letter of the law, and although he genuinely does want his town to prosper, he’s stubbornness is causing major problems for all its citizens.

So what are these problems? Edgewater is a Saltuna town. It produces a synthetic canned food that feeds the rest of the solar system, and it’s all the town eats because Terra 2’s soil seemingly doesn’t allow for crop production. It doesn’t take a genius to work out that’s probably not a very healthy diet.

And, indeed, it isn’t. The town is split between the healthy and those who have contracted a plague and are condemned to isolation. But to speak ill of the Spacefarer corporation is a strict no-no that could see you isolated or imprisoned in Edgewater, so nobody is really prepared to speak up.

Except, of course, for the deserters.

Led by a lady named Adelaide, the deserters have left Edgewater and set up camp elsewhere calling it Botanical. As you’ve probably already discovered by this point, they’re sustaining themselves on crops grown from Terra 2’s soil, which is something that Edgewater citizens haven’t been able to achieve since they arrived.

So how does she do it? The secret is using human corpses as nutrients for the soil, but it also requires a portion of the generator’s power that sustains Edgewater.

Both Adelaide and Tobson want a maximum share of this power. Tobson so that it forces the deserters in Botanical to return to Edgewater and provide some much-needed man-power to increase the town’s efficiency, and Adelaide because she wants to see Tobson and company-adhering personal in Edgewater suffer and be forced to abandon Edgewater once and for all.

At first glance, it sounds as though Adelaide is being a little too over the top — almost sinisterly so. But the Spacefarer corporation don’t seem like very nice people, and Edgewater is a town in complete disarray almost to the point of no return.

And yet, starving Edgewater of power would effectively kill off the entire town and obviously be very upsetting for citizens like Pavarti, who you’re traveling with.

Redirecting Power to Botanical or Edgewater in The Outer Worlds

So now we’ve reached our choice: Starve Edgewater, dethrone Tobson in the process, and support a budding community of deserters; or, shut down power to the deserters and force them back to Edgewater so the town can keep dribbling on in a sorry state?

Thankfully, our preferred answer isn’t quite so black and white as to doom one or the other party. There’s a happy ending and it’s probably your best bet.

Divert power to Edgewater and destroy the deserter’s camp. This will force deserters home, though Adelaide will be furious remain vehemently opposed to returning.

But there’s a solution: you can insist Tobson step down from his post, which will convince Adelaide to return on the proviso that she becomes the administrator.

That sounds like a tough ask, initially, without causing a huge stir by simply walking into Tobson’s office and blowing his brains out. That’s an option, of course, but it’s not a pleasant or necessary one.

Tobson will resign and he’ll do so because you’ve got a vital piece of information he doesn’t know: Adelaide’s community can grow crops and they can stop the spread of the plague. Just make sure you explain the truth to Tobson — that she’s using human corpses as a fertilizer.

He’ll find that solution actually quite brilliant and he’ll admit her better qualifications for the post. Perhaps somewhat surprisingly, he’ll resign and condemn himself to company disgrace for the good of his beloved Edgewater.

This outcome will seal Pavarti as a recruitable companion, increase your reputation with the Spacefarer Corporation and essentially please everybody involved.

For us, that’s the best choice and so hopefully that’s given you some food for thought as you work out whether to redirect power to the Botanical or Edgewater in The Outer Worlds.

For more useful tips and guides on the game, be sure to check out our extensive guide wiki.