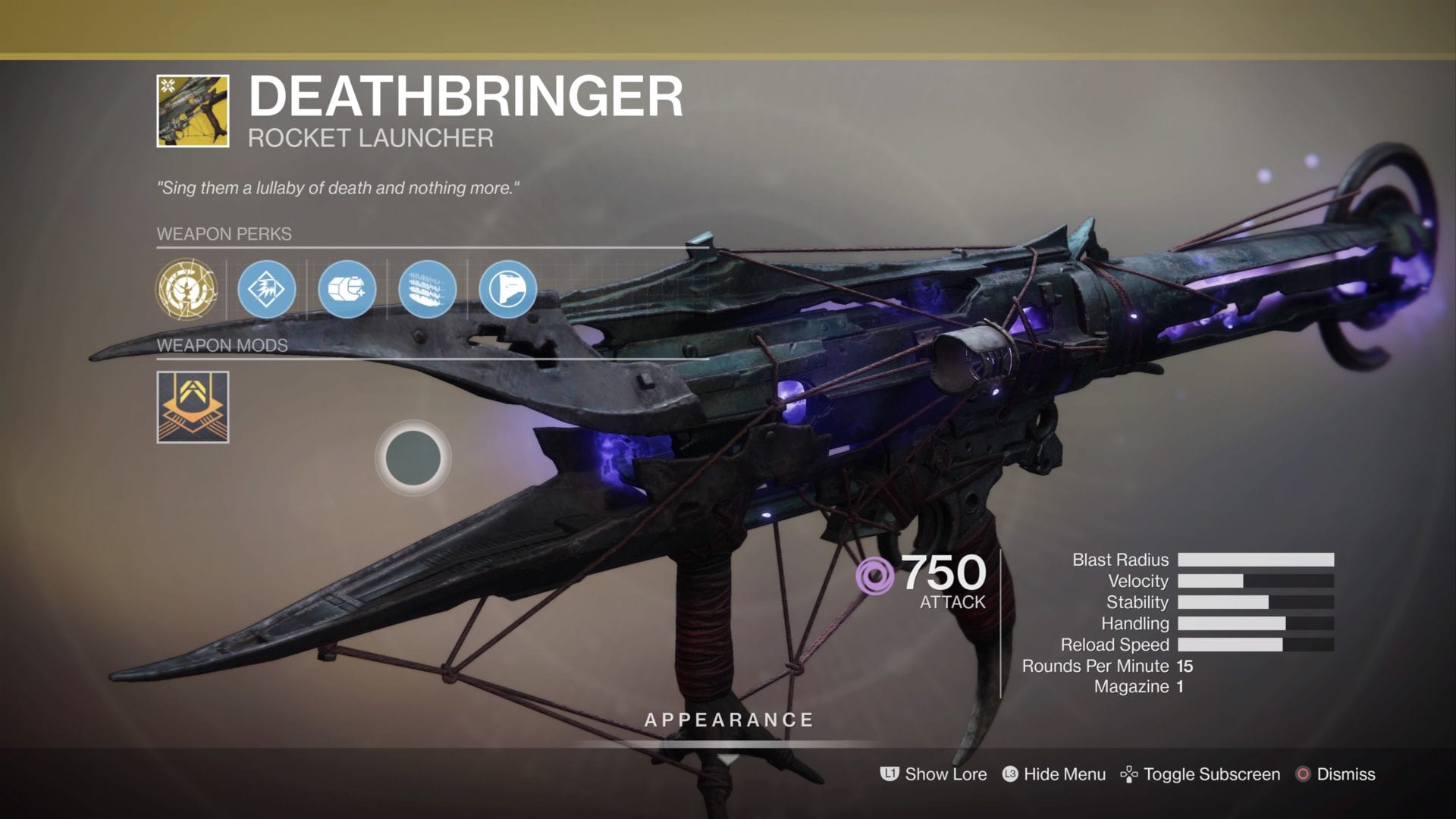 Any Destiny 2 fan knows that getting the best exotics is the name of the game, especially when it comes to the weapons. The upcoming Shadowkeep DLC is no different, as it adds a lot of powerful weaponry to the field. Here is everything you need to know about how to get the Deathbringer Exotic Rocket Launcher.

Unlike most of the exclusive items in Destiny 2, the Deathbringer Exotic Rocket Launcher can only be obtained via an exotic quest.

How to Get Deathbringer Exotic Rocket Launcher in Destiny 2

You can obtain the Rocket Launcher by completing the Symphony of Death Exotic quest.

Before starting anything, you’ll first need to complete the story campaign of Shadowkeep. The story content in this expansion isn’t as lengthy or time-consuming as Forsaken, so you should be able to knock it out pretty quickly.

Once you’ve beaten the story, you can talk to Eris Morn to receive a new quest about the memory of Sai Mota. After completing the first couple of objectives, you can talk to her again to proceed.

Here are the quest steps for Symphony of Death:

The Festering Bone can be obtained just by completing a Public Event near the Hellmouth area.

The Ritualistic Bone can be found in the K1 Revelation Lost Sector, located in Sorrow’s Harbor. It’ll be in the chest at the end of the area.

And lastly, you’ll get the Marrow by killing the yellow-bar Bone Collector enemy on the Moon. This enemy seems to spawn primarily in the Anchor of Light area.

Next step, you’ll need to do the Scarlet Keep Strike again. Just play through it as per normal until you reach the section where the elevator stops for the second time.

Get off the elevator and head to the right side of the chamber to kill the Wizard. You’re one step closer to completing Symphony of Death and getting the Deathbringer Rocket Launcher.

Next up, you’ll simply need to kill a bunch of enemies to complete the next quest step. You’ll have to kill regular red-bar enemies, yellow-bar elites, and bosses. Once you’ve filled up all meters for this quest step, you can proceed.

For the final step of this quest, head back into the Circle of Bones to start a new quest waiting for you there. Follow the objective markers, and you’ll eventually be tasked with killing enemies that start 60-second timers when they spawn. Your job is to just kill them before the timer runs out.

Kill the final Deathsinger boss to complete the mission, then return to Eris to collect the Deathbringer.

Once you do unlock this shiny new Void rocket launcher, you’ll get able to take advantage Deathbringer’s exotic perks:

With the Deathbringer Exotic Rocket Launcher, it is only a matter of time before you are blowing enemies away in the campaign and crucible alike (hopefully).

That is everything you need to know about how to get the Deathbringer exotic Rocket Launcher. For more helpful tips and tricks for Destiny 2: Shadowkeep, be sure to check out our ever-growing guides wiki for the new expansion.