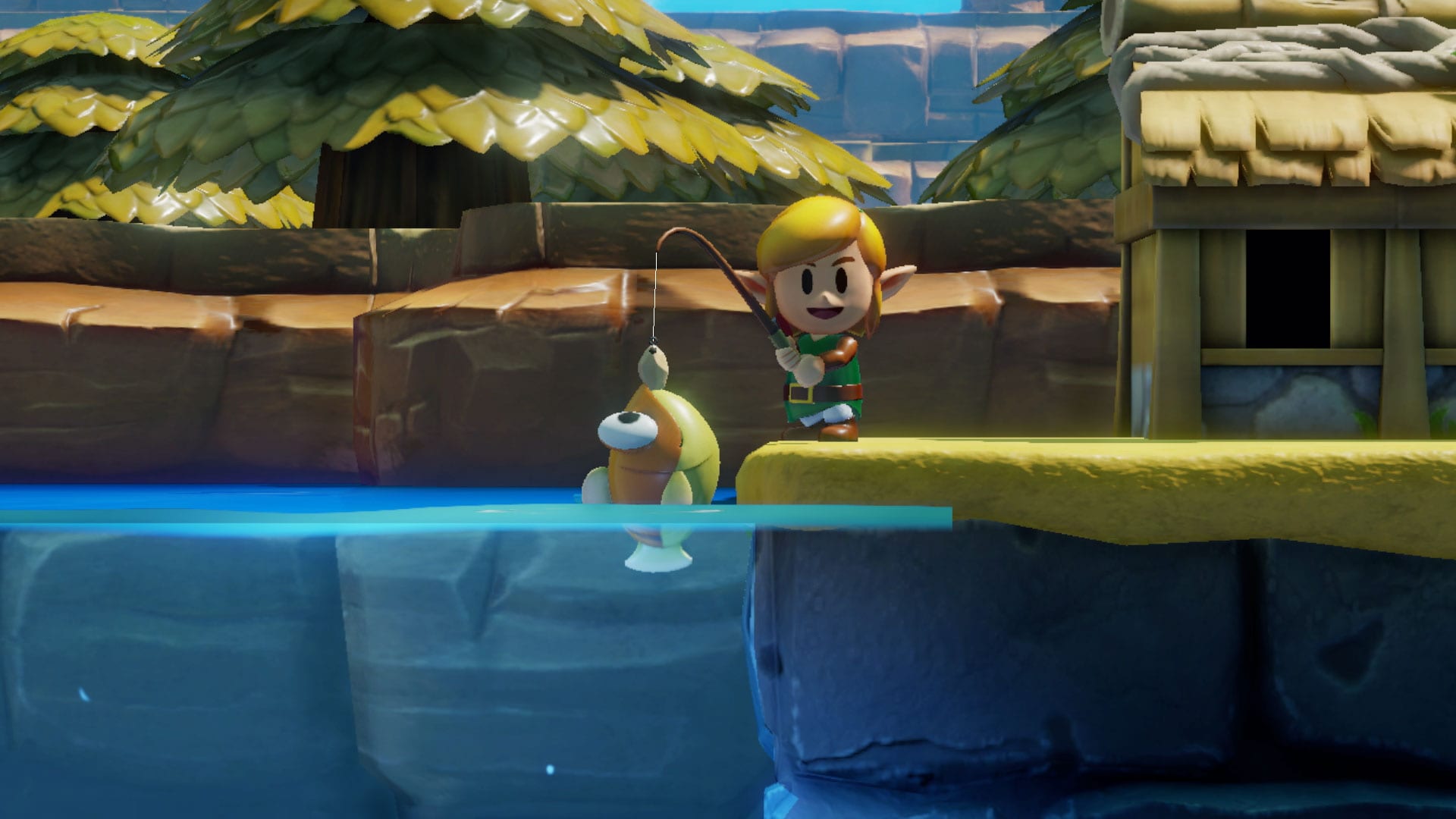 There are a total of 15 items in Link’s Awakening that you can acquire via a very long trading sequence. By giving one item to someone, they will give you a different item to give to someone else and so on and so forth. Here’s a full walkthrough of the trading quest sequence in Link’s Awakening.

How to Get Yoshi Doll

The first item that sets off the trading sequence is an adorable Yoshi Doll figure that can be found early on in the game at Trendy Game, that shop in Mabe Village that is host to a crane game.

Pay up 10 rupees to play the game and use the crane to grab Yoshi –this should be pretty easy as Yoshi isn’t on one of the moving conveyor belts and the crane is easy to use.

How to Get Ribbon

Now, take that Yoshi Doll and give it to Mamasha, the mom that lives in the northern-most (and biggest) home in the village. Talk to her and she will take the doll and will replace it with a shiny pink ribbon.

How to Get Can of Dog Food

Once you have the pink ribbon in hand, go over to the house with the Chain Chomp in front of it, but go into the entrance on the right side and speak to the baby Chain Chomp. In return for the bow, it’ll give you a can of dog food.

How to Get Bananas

After you have the can, go back to the shore where you first awakened and go to the sole house with bananas all around it. Talk to Sale inside and give him the dog food, in which he’ll trade you for some bananas.

How to Get Stick

Once you get to a section in the game in which you have to go to Kanalet Castle, there will be a monkey named Kiki standing on the right-front side of the castle, asking for some bananas.

Give Kiki the bananas and not only will they build a bridge for you with the help of their monkey friends, but Kiki will leave behind a little wooden stick that you’ll be using later.

How to Get Honeycomb

Just east of the Ukuku Prairie fast travel spot, you will see Tarin standing next to a tree with a huge beehive on it. This event will only happen once you complete the third dungeon by the way.

He’ll take your stick and use it to whack the bees away leaving behind a honeycomb for you to pick up.

How to Get Pineapple

Once you get over to Animal Village (it’s on the south-eastern section of the island), you will meet a ton of anthropomorphic critters, including Chef Bear.

Give the Bear the honeycomb to help with his meal and he’ll trade you for a Pineapple.

How to Get Hibiscus

On top of the Tal Tal Mountain Range, you’ll run into the only man up there who is named Papahl.

He complains about being famished and asks for your pineapple. Of course, he’ll repay you though by giving you a hibiscus flower. Now, let’s go back to Animal Village.

How to Get Letter

If you speak to Christine the Goat in the Animal Village, she’ll take the hibiscus flower from you and send you on a quest to take a letter to a man named Mr. Write who lives on the border of the Mysterious Forest.

How to Get Broom

Just north of the mysterious forest lies a small shack where Mr. Write resides. He’ll take the letter from you but will be very confused of the contents within the letter.

Anyways, he’ll reward you for your time spent with a measly broom, but there’s someone that needs one of those!

This is probably one of the weirder parts of the trading quest, to be honest.

How to Get Fishing Hook

Grandma Yahoo lives in the south part of Mabe Village and is always seen walking around outside her home. She will happily take the broom from you and will give you a fishing hook in return

How to Get Necklace

In the lake that surrounds Catfish’s Maw, there is a small bridge to the east of the entrance to the dungeon that you can swim underneath, where Link will find a fisherman who will take the fishing nook in exchange for a mermaid’s necklace.

How to Get Scale

Now, just behind Catfish’s Maw, you’ll find a mermaid who is looking for a necklace that she has lost. Hand over that necklace from the fisherman and you will be rewarded with a mermaid scale.

How to Get Magnifying Lens

If you haven’t noticed, there is a stone mermaid statue just south of Catfish’s Maw. Go interact with it and place the mermaid scale to open up a secret staircase.

Go through and defeat the invisible enemies and then you will find the magnifying lens further inside.

How to Get Boomerang

The boomerang is the last item that you can get in the trading quests and is found on Toronbo Shores behind a cracked wall that can be blown up with a bomb. Go inside the cave after getting the lens and you will now be able to see Goriya.

He’ll give you the boomerang, but first you’ll need to give him one of your weapons in exchange.

But don’t worry, you can talk to him again after the trade and he’ll sell your item back to you for 300 rupees if you can’t live without your hookshot or bow and arrow.

And that is literally everything that you need to know about the trading quest sequence in Link’s Awakening. For more on the game, be sure to check out our ever-expanding wiki guide and read our scored review.

NBA 2K20 Locker Codes: How to Get All Locker Codes (August 2020)
Valorant: All Prime Skins
Pokemon Go: All Trade Evolutions