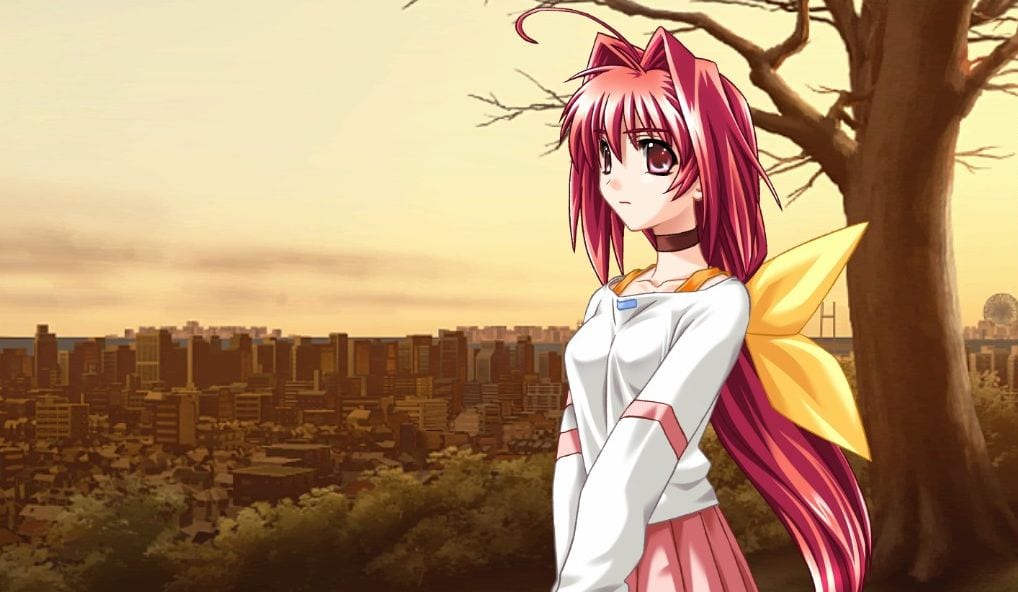 The Muv-Luv series by âge is considered by many as one of the best visual novel franchises of all time, and there is one sight that has become quite familiar for the fans.

Most of the franchise, including its predecessor Kimi Ga Nozomu Eien, is based in an around a high school named Hakuryou and its counterpart Yokohama base in the Alternative universe.

If you’re unfamiliar with what this means, for the sake of brevity I’ll just mention that the series is based partly in our world, and partly in a parallel sci-fi universe in which humanity is threatened by a ruthless alien race named BETA, barely held at bay through the use of mecha defined Tactical Surface Fighters.

Yet, regardless of universe, one location remains basically unchanged, and it’s the tree on the hill behind Hakuryou.

It’s an iconic place where characters often convene to express their feelings in some of the most romantic and touching scenes of the whole visual novel genre.

You can see a small selection below, starting with Kimi Ga Nozomu Eien and going all the way to Muv-Luv alternative.

If you’re among those who loved the games, you’ll probably find them very familiar.

Yet, there is one element that not many know: that hill and that tree that hold a special place in the hearts of many of us, actually exist.

While they’re not behind a school or a military base (they’re actually in a park built around a sports complex), you can visit the place yourself if you happen to be in Yokohama, Japan.

You can find the specific location in Shimizugaoka Park. In order to reach it, you need to take the Keikyu Line from Yokohama Station and stop at Idogaya station.

After that, you can climb a rather steep hillside through a series of narrow streets and walkways within a quiet residential area. It’s quite the workout, but it’s worth it not only because the location is iconic for Muv-Luv fans, but also because it grants one of the best vistas in Yokohama.

Once you reach Shimizugaoka Park, the hill and the tree are impossible to miss, right behind the baseball field.

If you’re a fan of âge’s games, it would be no surprise if you shed a tear or two. We all share many memories bound to this specific tree. Some happy, some are sad, and some are heartbreaking.

I’ve been there twice, and I cried both times. I’m not ashamed to admit it, and those who played the series until the end of Alternative probably know the reason why the emotional impact is so strong.

If you can’t visit, as Yokohama isn’t exactly around the corner for most of us, don’t worry. Below you can find plenty of pictures and even a video.

If you don’t know what Muv-Luv is all about, the main series can be found in English on Steam and on PS Vita.

Incidentally, another Muv-Luv release is coming to the west, in the form of Muv-Luv: Photonmelodies. âge recently announced its 20th-anniversary event, which will happen in October.