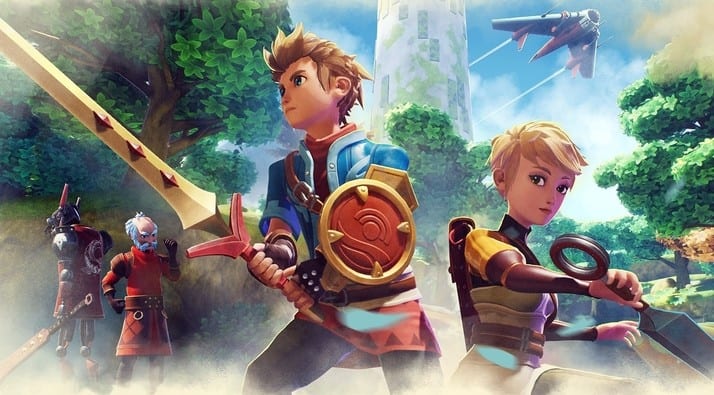 Have you already completed Link’s Awakening and looking for your next game to play? Well, if you really liked the combat, dungeons, and puzzles from this game, we have some recommendations for you to try out. Here are five games like Zelda Link’s Awakening.

The Swords of Ditto

The Swords of a Ditto is a charming and compact action-RPG that has you on a quest to defeat an evil witch. Its aesthetic is super adorable as it replicates the basic functions of Zelda but mixes it with a Saturday-morning cartoon look.

Something that makes The Swords of Ditto stand out though is what happens whenever you die in the game. You end up being reincarnated as a different hero 100 years later and you lose a lot of your progress.

It’s really fun (and easier) to play with a friend in Swords of Ditto and you’ll have an absolute blast trying out all of the different toys and items on enemies.

Blossom Tales is yet another top-down pixelated action-RPG that has contains many TLOZ influences.

Even being a clone of what is a fantastic game, Blossom Tales manages to deliver on the satisfying puzzle-solving and gameplay that Zelda is known for and it serves to scratch that Zelda itch if you’ve been feeling the urge.

Blossom Tales is one of the best indie Zelda games out there right now and it deserves to be checked out if you’re looking for games like Link’s Awakening.

Oceanhorn was originally a 3D mobile title but then it was eventually ported over to the Switch.

It’s a beautiful top-down dungeon crawler with excellent music, solid gameplay, and puzzle designs will definitely remind you of any Zelda game.

It’s one of the more “high-quality” Zelda-inspired adventure games out there and there’s even a sequel that’s just been released on Apple Arcade, so there’s plenty of ways to get into the Oceanhorn series.

Ittle Dew takes a lot of inspiration from Zelda as you travel through dungeons and solve puzzles by using key items that you can find.

The difference with this game though is that it only gives you three items throughout the entire game and you’re asked to experiment with them in a variety of ways out in the field.

Ittle Dew is also filled to the brim with secret shortcuts so that players can try to speedrun the game in as many ways as they can.

Its cartoonish, hand-drawn visuals also give it an upper edge, making it stand apart from Nintendo’s massive franchise.

A Link to the Past

I left this entry at the bottom of the list because it’s pretty obvious that if you’re trying to find games like Link’s Awakening, then you should probably start by playing other Zelda titles, but since Link to the Past is easily accessible on the Switch now, we had to add it.

Link’s Awakening on the Super Nintendo is what grounded the series into a household name and is considered by many as one of the greatest games of all-time.

This timeless classic still plays perfectly even after 25 years or so. Link’s journey through Hyrule this time around isn’t as weird as it is in Link’s Awakening but it’s a fine journey nonetheless.

That does it for our list of five games like Zelda Link’s Awakening. For more on the new Switch title, be sure to read our scored review right here, as well as our extensive wiki guide, which is full of handy tips and tricks for beginners.