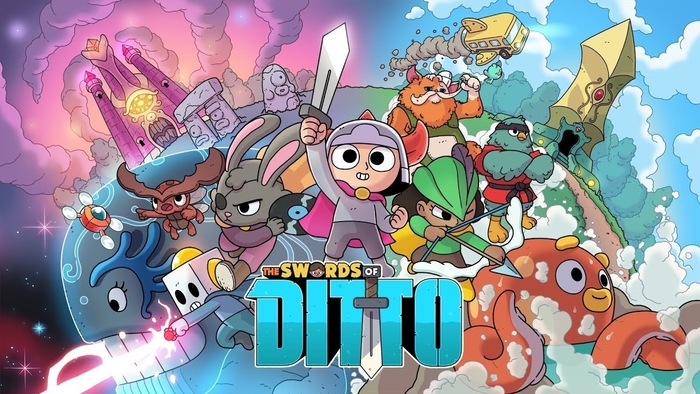 The Swords of Ditto on PlayStation 4

Getting to the end credits in Swords of Ditto required me to start my adventure over about 14 times (give or take). The demanding journey that I powered through proved to be more difficult than Swords of Ditto lets on. In other words, don’t let the cutesy, Adventure Time-esque art-style fool you. Swords of Ditto almost had me throw my controller through the window on multiple occasions, but I still found myself feeling satisfied and rewarded every time I inched closer toward my final battle with Mormo, the evil witch who attempts to spread her wicked influence over the world every one-hundred years.

From the get-go, The Swords of Ditto draws heavy influences from the Legend of Zelda, specifically A Link to the Past. The game even starts off with your main character being awoken from their bed with a voice telling them to “wake up.” You get up from your deep sleep and are told from Puku, your guide, that the evil witch Mormo is back to no good once again and like any good hero story, it’s up to you to take up a sword and show Mormo who’s boss.

The main premise behind the gameplay of Swords of Ditto is that it’s a roguelike, once you die, your character is permanently dead, causing you to lose your money, upgrades for your special items (toys), and any stickers that you have obtained. The only thing that you get to keep for your subsequent playthroughs is the experience you’ve gained with your sword. It levels up as you defeat enemies, and the enemies also level up with you as you get stronger. Once you lose all of your health, you essentially start the game over from scratch with a brand new protagonist.

The Swords of Ditto gives you a total of four in-game days to level up, equip yourself with stickers (which adds unique boosts to your character, like extra health or attack power), find new toys, and most importantly, scour through two dungeons where you have the option to defeat Mormo’s anchors. Now, this totally reminded me of last year’s Breath of the Wild. Remember how defeating the four divine beasts caused the fight with Ganon to be much easier, but you also had the option of skipping them entirely? Well, Swords of Ditto works the same way. As soon as you wake up, you actually have the option of sleeping-in until the last day, and go immediately to Mormo’s dungeon. With no upgraded sword or special items on you, there is almost no way that you would have a chance in winning, believe me, I tried.

The gameplay works just like most top down action-adventure games. Your main weapon is a sword that you will primarily use for defeating enemies with, but there are also special items called toys that when used, deplete some of your magic meter. Instead of being simple items like boomerangs and hammers, the toys are comical and playful. You’ll find yourself using a giant golf club to whack enemies with, as well as to play a little game of golf in dungeons to unlock doors. There’s also a BB gun, a drone, a giant foot, a flying disc, and a few more that you can purchase from the toy shop in town. For added bonuses, you can also head to the sticker shop to purchase add-ons for your body parts. For example, you can equip a sticker to your helmet that allows you to regenerate health or purchase a sticker that lets you dodge roll a little faster than normal. There are tons of stickers and toys to buy that will make every playthrough feel quite different from the last, letting you pick and choose what kind of arsenal you want this time around.

Like I said earlier, I defeated Mormo only after losing about fourteen times, which in turn, taught me something new with each and every death. On some of my adventures, I lost patience entirely and sped through to the last day, hoping to gain some much needed luck, but alas, I realized the only way to get to the end of this journey is take my time with everything. I studied the attack patterns of every enemy that I encountered, scoured the small but varied maps for any items and upgrades that I could find to give me an edge. I also, while I hate to admit it, had to change the difficulty from medium to easy, simply because I was starting to go crazy from how difficult the game had gotten the more that I had died, since the enemies scale with the power that your sword obtains. Once I put the game’s difficulty down a bit, I had a much more pleasant experience which allowed me to enjoy my many adventures without going insane after dying multiple times in a row in the multi-tiered dungeons.

The dungeons are exactly what you would expect from a roguelike that pays major homage to Zelda. There are chests to find, light puzzle-solving, tons of enemies to slash through, boss keys to collect, and a final boss. The dungeons seem to be procedurally generated so that each run doesn’t feel extremely similar, but after going through the dungeons maybe about 15-20 times or so, they start to feel very similar.

You’ll start to notice that while each room may have a different layout, the same puzzles are present, and you’ll find yourself doing the same actions over and over again. The development team over at Onebitbeyond did such a superb job at designing the dungeons to feel just like a classic top notch Zelda dungeon, but when you’re forced to go through the story multiple times (unless you’re a god anyway), they start to feel mundane.

Getting over that, once I finally took my time and gained the patience to accomplish these micro-goals that eventually led to my success over the evil sorceress, I was immensely satisfied and felt that the multiple deaths of my characters were not in vain, but led to my triumph. I was skeptical at first, seeing at how closely this action-adventure title resembled The Legend of Zelda, but it only borrows what it needs, and has a lot going on that gives it its own unique personality as well.

Being awoken over and over again after feeling defeated countless times definitely took a toll on me, but once you get to the end, it’s all worth it.