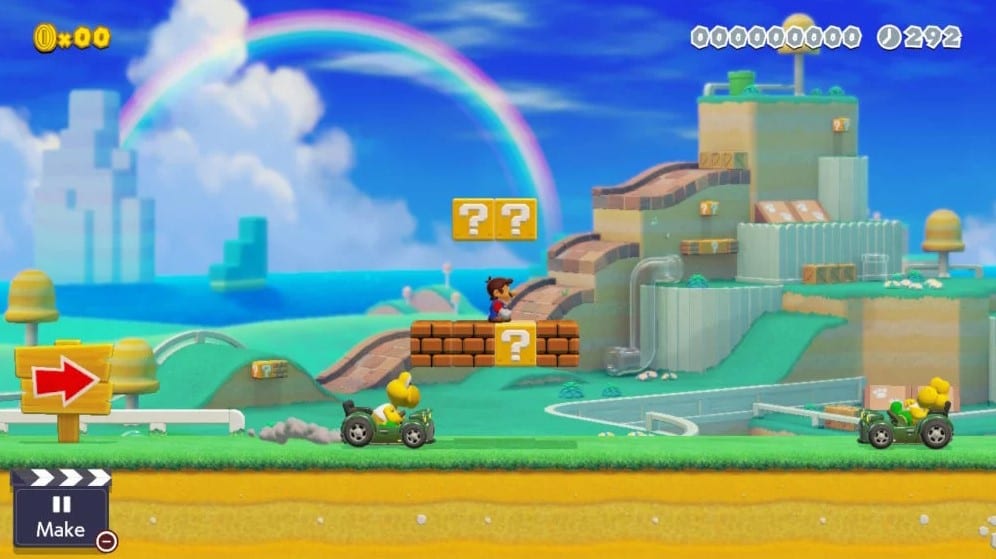 Even though it’s a seemingly random addition to the 3D World style, the Koopa Troopa Car fits in surprisingly well. It’s not great for platforming, but it sure will get you from point A to point B in a hurry. Here are some details on how to use the Koopa Troopa Car and what it does in Super Mario Maker 2.

The Koopa Troopa Car is one of the most intriguing pieces in the Super Mario 3D World style since it never existed in the original title. There were massive rideable ice skates and the Double Cherry that split your character into two, three, or more, but no Koopas driving green jeeps as we see in Super Mario Maker 2.

The Koopa Troopa Car in Super Mario Maker 2 may seem like some mystical speedy machine that’s as quick as it is unruly. In reality, it’s just another asset on the long list of pieces you can add to your custom levels. This vehicle can be found in the enemies section of the 3D World style. Like any other piece you just need to select it

Koopa Troopas are the only enemies who can commandeer the vehicle, but any player character can jump into the driver’s seat after knocking the little turtle out. Just make sure to time your jump correctly, or you might get flatted by the car’s reckless driver.

When you get in the car you can still jump and move left and right, but you also can honk the horn by pressing down on the left stick. It doesn’t damage enemies, but it’s still fun to tear up the custom courses in Super Mario Maker 2 while honking wildly. Having fun is important, but three careless crashes and your joy ride will come to an unceremonious end.

If you’re going to be placing these cars in your levels, then you may want to remove any complex jumps. This car is ridiculously fast, can take out enemies, and drive on surfaces you can’t normally walk on. However, you sacrifice a massive amount of aerial maneuverability and jump height when you get behind the wheel.

That’s all there is to know about the Koopa Troopa Car in Super Mario Maker 2. If you want to learn about placing enemies in other vehicles, then check out this guide.