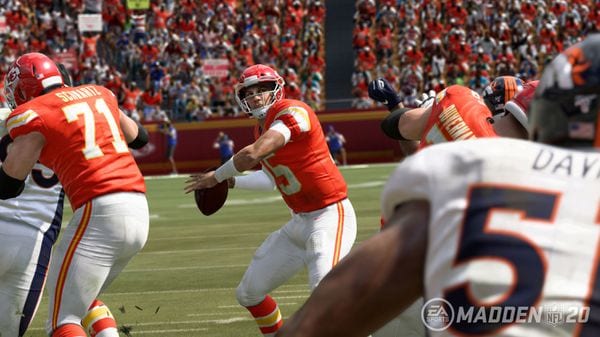 Madden 20 brings some good old football back to modern consoles for yet another year, with plenty of familiar features back for fans of the franchise. One of these features is Playmaker, which essentially lets you micromanage your receivers on the fly during a play. With that, here’s how to Playmaker in Madden 20.

How to Playmaker in Madden 20

There are bound to be plenty of times you’re running an offensive play and all your receivers are totally covered. That can, of course, lead to any number of bad things including an interception that turns the ball over.

Essentially, the more time you take to throw the ball the more chances your opponent has to take advantage of that and possibly get the ball. Needless to say, you’ll want to create openings as fast as you can, and Playmaker works for that. Luckily, it’s easy enough to do.

While you’re controlling the QB before a pass, to use Playmaker in Madden 20 simply tilt the right stick to lead a receiver in the direction you’re tilting. Be aware that when you use Playmaker you’ll always control the receiver that is closest to your QB, and you can see said receiver highlighted in a yellow outline.

If you don’t have the receiver you want, try and move around your QB so they’re closer to the one that you want to control. Do be aware, however, that Playmaker isn’t the be-all-end-all, as the players you control are still human with their own AI. In other words, it doesn’t always work exactly the way you want so don’t rely on it too heavily.

You can’t make them instantly stop and turn, so it’s better to use Playmaker as a kind of last resort. Something to help you get the ball out quickly when you need to.

That covers everything you need to know about how to Playmaker in Madden 2o. For even more tips and info make sure to search Twinfinite, or check out our Madden 20 guide wiki.

You can also feel free to drop any other questions you might have in the comments below, and we’ll do our best to get you a quick answer.