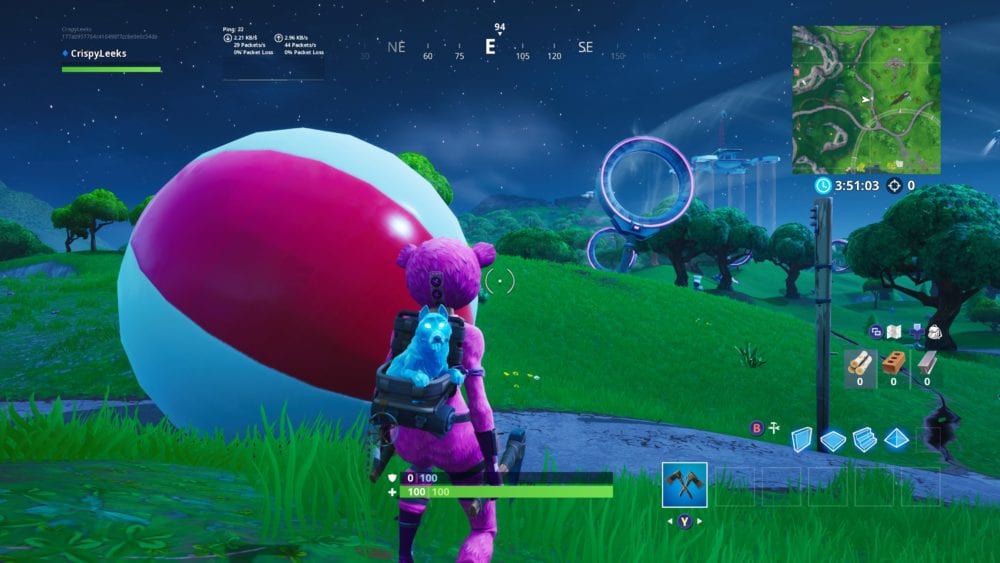 We’re officially in Summer and to celebrate the hot weather, Epic Games has kicked off the 14 Days of Summer Fortnite event. Alongside new LTMs for players to dive into, there’s also a new set of challenges. One tasks players to “Bounce a Giant Beach Ball in Different Matches.” Here are the Fortnite beach ball locations and how to bounce a giant beach ball in Fortnite.

There are only three giant beach balls that can be found on Fortnite’s map, and they’re at fairly different areas of the map.

The first can be found just west of Lazy Lagoon, south of The Block, and west of Pleasant Park. It’s in grid reference D3/ E3 and we’ve included a screenshot of it down below, alongside our map marked with both locations above.

The other giant beach ball in Fortnite can be found just northwest of Paradise Palms. It can be found in grid reference I7 and is just lying there in the desert next to one of the sky platforms.

Another point of reference is that it can be found directly east of the broken bridges between the normal grassy biome and the desert biome, as you can see in the marked map above.

The third ball can be found just southwest of Dusty Divot in grid reference F6. Look out for the sky platform here again and you’ll find this ball waiting around underneath.

How to Bounce Giant Beach Balls

To bounce these giant balls, all you need to do is run over to them and hit them with your pickaxe (or Harvester if you one to use the technical name for it). You cannot shoot them with your weapons or just walk into it.

Of course, it’s worth noting that you’ll have to alternate between these two giant beach balls five different times in order to complete this Fortnite 14 Days of Summer challenge, and there’s going to be a ton of players trying to do the exact same thing at the start of matches.

We’d also advise doing this at the start of a match, simply because with the sheer number of players in each game trying to bounce the beach balls, they’re probably going to stray somewhat from the starting positions we’ve noted in this guide. The sooner you head to these locations, the better chance you’ve got of finding them right where we said.

Be prepared for a brawl, try and land as close as you can to the beach ball at the start of the match, and hope for the best. That’s all we can suggest.

For more tips, tricks, and guides, be sure to check out our ever-expanding Fortnite Season 9 guide wiki. We’ve also got a guide on where to dance at different beach parties, should you be struggling to track those down.

Animal Crossing Player Shapes Their Island Into Hyrule From Zelda: A Link to the Past