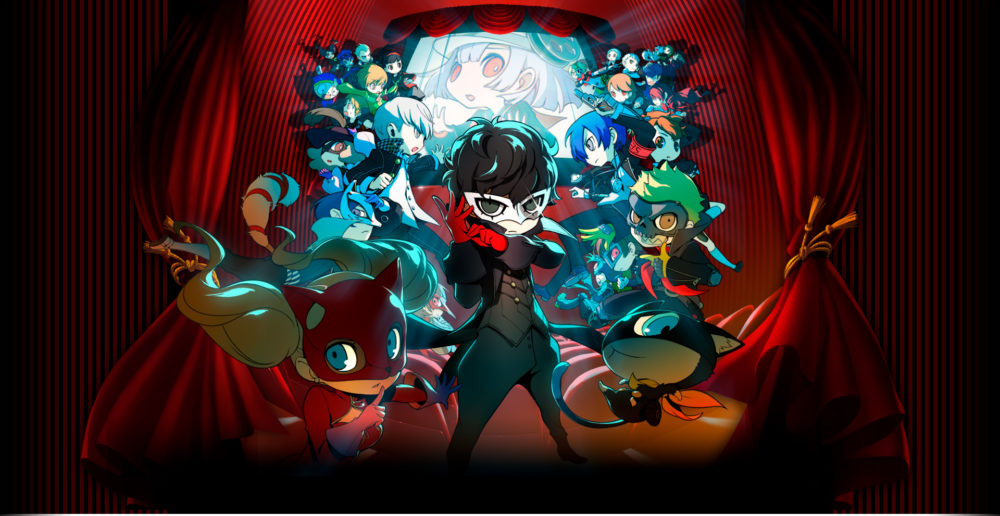 Nearly one month ago on April 25, the Persona 5 Switch dream died. It was revealed that the ‘S’ in P5S stood for Scramble, not Switch. Although we’re not getting the 2017 Atlus JRPG on that console, another Nintendo console is getting something equally as intriguing. That is Persona Q2: New Cinema Labyrinth for the 3DS.

If you don’t have a 3DS, then you’re out of luck. However, it’s safe to assume that there’s a lot of overlap between Switch and 3DS owners.

Now I don’t want to oversell this for you 3DS owners out there. No, you’re not going to explore the palaces of Persona 5 on a 3DS. The worlds of Junessic Land and Kamo City are completely new.

You’re not going to go through the grind of daily high school life in Tokyo. Yet, the gameplay and characters are absolutely Persona 5.

Everything starts out just dandy. The whole gang is there (even Goro Akechi) doing their Phantom Thieves shenanigans. Early on while exploring the public’s subconscious, Mementos, you get sucked into a strange city.

This takes place during the late game of Persona 5, so the characters are extremely close by then.

From here, Persona Q2 starts to become its own thing. You have the whole crew of the Phantom Thieves running around this city that’s run by a cheap Superman knockoff.

Anybody who played Persona 5 will recognize him as Kamoshida. In this world, he takes on the form of Kamoshidaman. It’s a bit goofy, but it’s undoubtedly Persona.

That’s one of the biggest differences between Persona Q2 and Persona 5. In this 3DS title, the subject matter is a bit less impactful. Since each world they visit is a fictional movie, there are no real-world implications.

The stakes in this game are much lower; however, Persona Q2 carries over enough from Persona 5 and past Persona games to make it a worthy alternative.

I played the heck out of Persona 5. I was considering doing another playthrough of the game before getting deep into Persona Q2. After only a few hours in, it was able to satisfy my desire to get back into that world.

Seeing all these character interactions is a treat. Even if you’re not familiar with the characters from Persona 5, it’s easy to tell how the dynamics of the group work.

The writing in Persona Q2 is exactly on point for the Persona 5 characters. Seeing their interactions within the group combined with how they get along with Persona 3 and 4 characters is even more interesting.

There’s a bit where Kanji is clearly enamored of Morgana and Teddie is extremely jealous. It’s a silly scene, but it’s true to all characters involved.

Persona 5 is great but getting to experience characters from past games is another massive bonus. The individual stories of those games are great, but it’s the character interactions that drive the best parts of this franchise.

Persona Q2 has those fantastic moments in spades thanks to the crossovers with Persona 3 and 4.

The writing and character building is what you would expect from Persona. The battle system is also incredibly familiar. In the end, it’s all about finding your enemy’s weaknesses while avoiding their strengths.

There are a few additions like Sub-Personas and rows that freshen up the typical battle.

In past Persona games the, main character always has a special ability known as Wild Card which lets them wield multiple Personas. Returning from Persona Q, Sub-Personas let every character utilize the powers of a second Persona.

The only drawback is that the main characters are then limited by this rule since they can only wield two as well. Despite that, the ability to fully customize the attack types of your whole team is a massive advantage in battle.

Also returning from Persona Q are the row placements in battle. This system allows you to set up a wall of sturdy fighters to protect your more fragile spellcasters in the back.

It’s also advantageous to put the bruisers up front since they can hit the enemy’s back row with physical attacks. They can’t reach quite as far when sitting in that back row.

Despite the changes here and there with the Persona Q2 battle system, it still lives up to its reputation of being one of the hardest JRPG series.

At its core, this game is the closest you’ll get to Persona 5 without playing the real thing. The character interactions and comedy are authentic Persona fun.

As someone who has spent hundreds of hours with the Phantom Thieves, I can confidently say that Persona Q2 scratches that Persona itch. There are a few bits and pieces that give this game its own distinct feel. However, the heart of this game is Persona through and through.

You can get Persona Q2: New Cinema Labyrinth on June 4 when it comes to the Nintendo 3DS family of systems.