I never got the opportunity to enter alternate dimensions and fight grotesque monsters with a group of superhero friends when I was a high schooler, but boy, I sure wish I had all the brains, charm, and frankly astounding time management skills of Persona 5’s new, soft-spoken protagonist.

With Persona 5, Atlus has delivered the latest entry in a series that has recently become known for indulging in our perfect high school fantasies. All while adding in a dash of style, Japanese retro goodness, and old-fashioned JRPG fun.

Right from the get-go, the game wastes no time in introducing you to basic combat mechanics. The opening stage has you leaping from one chandelier to the next, as you attempt to escape a high security casino with a valuable briefcase. Mobility in Persona 5 feels less restricted than they did in past games – with a simple press of a button, your character can climb ledges, dart around corners, and jump to nearby platforms.

Combat is turn-based, but Persona 5 presents this tried-and-true formula in a fresh and exciting manner. The user interface is red and loud and overwhelming, but combat itself is simple. Your individual commands are tied to the different face buttons on the controller, so just tap the button you want, and watch the action unfold. There’s a certain delightful snappiness to the way the combat flows in the game. Hitting triangle brings up a list of your Persona’s skills and abilities, and your character summons the demon quickly onscreen with much finesse and little hesitation. Choose to retaliate with a physical attack instead, and your character will dismiss the demon swiftly before lunging towards the enemy.

There’s a highly stylistic elegance to everything Persona 5 does – from its combat and item menus, to its loading screens and character designs.

At the end of the game’s energetic opening stage, the protagonist is captured by the police, and interrogated by a fierce woman who demands to know everything about the Phantom Thieves. The game’s clock then rewinds, taking us back to an earlier chapter that shows us how our story started. 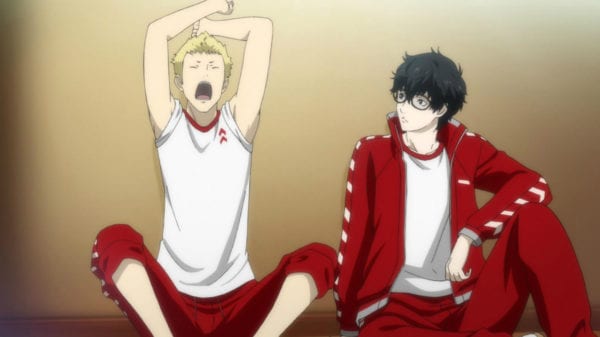 Make no mistake; Persona 5 is still a JRPG, which means there’s going to be a certain amount of restriction and hand-holding during its early hours. When the game starts proper, we’re introduced to new characters, the neighborhood, and the game’s reason for forcing you into alternate realities to fight demons.

Whereas Persona 4 themed its dungeons around the hearts and inner thoughts of your friends and teammates, Persona 5 centers them around its villains. This gives each dungeon (or Palace, as they’re referred to in-game) a twisted sense of evil. The dungeons themselves have been cleverly designed too, with each one being a different location depending on the villain’s personality. There’s a castle, a bank vault, and a museum, just to name a few. Each is equipped with its own set of unique puzzles, and they’re such a big step up from the randomized floors we used to see in Personas 3 and 4.

That said, the dungeons and their puzzles did start to drag on and overstay their welcome as I got further into the game. Some puzzles feel like they were designed to test the player’s patience, and instead of adding more variety to gameplay, they felt more like a chore I had to suffer through before I could get to the big payoff with the main boss. I almost found myself missing the random floors of Tartarus and the TV world – at least then you knew when the end was in sight, and there weren’t any silly gimmicks snatching your attention away from the combat.

Because Persona 5 is a game themed around being a thief and pulling off heists, completing a dungeon isn’t as simple as just reaching the end and defeating a boss either. The thieves are tasked with securing an infiltration route to the Palace’s core ‘treasure,’ before you have to return to the real world to send an ominous calling card to the villain. You can then return to the Palace the next day to pull off your heist properly and make off with the treasure.

Your targets start off as small-time baddies, but soon enough, the Phantom Thieves will start going after bigger fish like crime lords and corrupt officials. Before long, Persona 5 becomes a war between young rebels of society and the rotten adults who perpetuate lies, nepotism, and other shady dealings in the world. The Persona series has never shied away from taboo or controversial topics; in this latest entry, we’re dealing with cultural and ideological conflicts about what it means to be accepted by the societal norm, and to go against the natural order of things. The message is a thought-provoking one, though I have to say it falls a little flat at times here, particularly as the game starts to drone on about the same old issues without any meaningful discussion towards its tail-end. 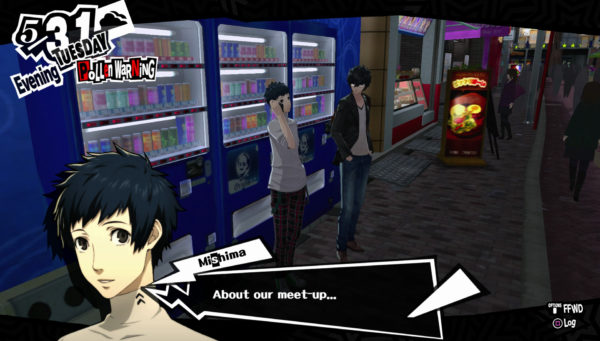 Having said that, Persona 5’s effort to tie all of its characters and side stories back to this core message is commendable. While the social links in the previous two games were often charming little character stories that you could unlock during your free time, most of them had no real bearing on the overarching plot. Not so in Persona 5.

In Persona 5, the people you spend time with are called Confidants. Unlike your social link partners, each of these Confidants are rebels in their own way, and they’ve been cast out by society for some reason or other. Because of that, you’re able to forge personal connections with them, and learn about their own views on society as you go along. Leveling up your Confidant ranks also provides additional abilities that will be useful to the Phantom Thieves. And of course, spending more time with your own teammates means that you’ll work together better in combat. As always, leveling Confidant ranks will also increase the power of the Personas you fuse in the Velvet Room, too.

It all feels like a very organic process. You spend more time with friends in real life, and as a result, your team synergy goes way up when you’re fighting together. The whole Confidant system feels natural to your character as a Phantom Thief, and nothing feels tacked on or thoughtless.

Even so, I have to say that Persona 5’s core cast of characters feel rather lacking in comparison to the ones that came before them. It definitely doesn’t help that most of them are reused archetypes that we’ve already seen in previous games: there’s the stern student council president who rides a bike, the young punk who runs his mouth way too often, the shy girl who’s good with computers, and the pretty girl who’s popular for her looks and career. There’s even a detective prince. Reusing archetypes wouldn’t be such a bad thing if the characters themselves were all likable and interesting, but they have some pretty hit-or-miss moments. The Confidants outside of your core cast of party members are fantastic, but it’s a huge blow for the game if the characters you spend the most time with don’t feel as well-written or fleshed out. At least Morgana’s always a delight to have around.

Persona 5’s world is very grounded in reality, too. Set in modern-day Tokyo, your character can roam the streets of Shibuya and Shinjuku, and even unlock hangout spots at popular real-life haunts like Akihabara and Ikebukuro. Persona 5’s aesthetic calls back to both modern and retro Japan, with Shibuya’s slick skyscrapers contrasting against Yongen-jaya’s Showa-style second-hand shops and cobbled streets. The amount of detail that’s gone into recreating Tokyo’s unbelievably packed subway stations and streets is impeccable. There’s a whimsical sense of nostalgia scattered all throughout Persona 5’s more backwater areas, and it adds to the weight of the Phantom Thieves’ struggle against the corrupt corporate officials. 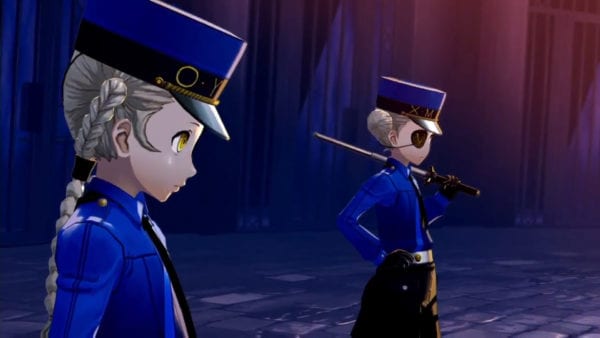 Much of the fun of the game comes from trying to manage the protagonist’s impossibly busy schedule. Every Palace has a deadline for you to meet or it’s game over, but you can’t forget to spend time with your friends either. And don’t forget to go to all those part-time jobs so you can raise your social stats and become a more well-rounded person. Oh, and you’re a student, so you need to find time to study as well. As the Phantom Thieves grow in popularity, you’ll also receive smaller requests on your Phan-Site, and these involve you going into a side dungeon called Mementos where you can get even more experience and money. You can only do so much in one day, and you will run into instances where your schedule doesn’t go as planned because you didn’t have the right social stat for a Confidant, or the game decides that your time would be better spent at the beach instead.

Still, finding the perfect balance between dungeon-crawling, friends, and studying feels satisfying and oddly cathartic. Almost as if I was reliving a better version of my own high school life vicariously through the protagonist.

However, it does become pretty obvious when the game attempts to gate you from certain events or Confidants to extend playtime. There are multiple instances where you simply won’t be able to progress through a Confidant’s storyline, or even start a relationship with them until you reach a certain threshold in your social stats. Some require you to reach the maximum rank in specific social stats before you can even do anything with a Confidant. This wouldn’t be quite as annoying if said Confidants weren’t presented so near to the beginning of the game, or if social stats weren’t such a pain to rank up. It’s obvious that you’re not intended to experience everything the game has to offer during your first run, and Persona 5 wants you to go into new game plus, where you get to keep your social stats. Persona 4 was certainly guilty of this as well, but it feels much more prevalent in this entry.

At the end of the day, Persona 5 is a game that offers us the chance to live the perfect high school fantasy life we never had. It’s a chill, feel-good JRPG where you take control of a likable young man with the perfect social life, along with a secret double life where he and his friends save the world from corrupted evil. The game’s core message feels weak at times, but Persona 5 more than makes up for that with its style, and by showing players a damn good time. Is it the best Persona game we’ve seen yet? Not quite, but it sure is the best-looking one to date.