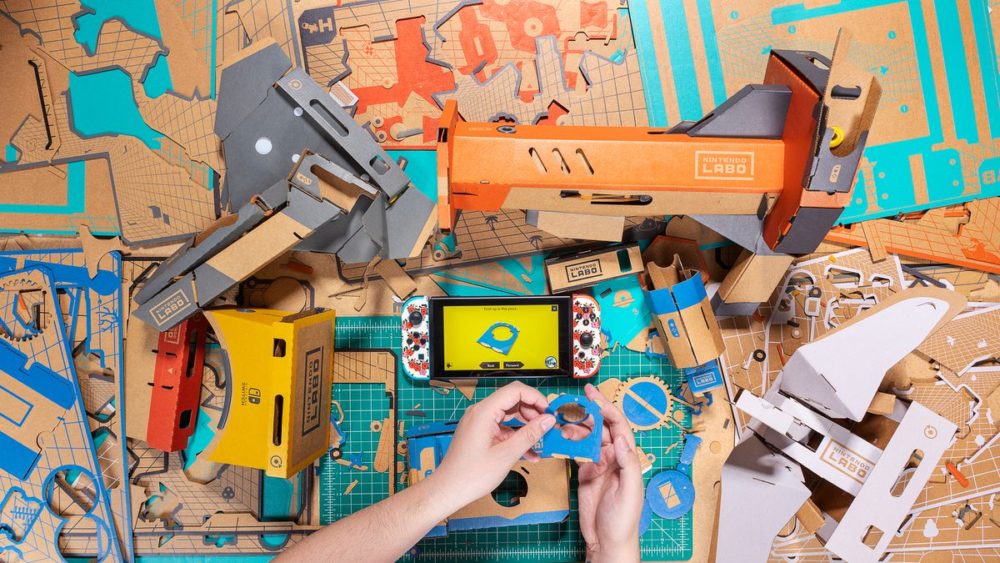 Nintendo, out of nowhere it seems like, announced that a VR Kit would be coming to their Labo series of interactive experiences. Just like the other Toy-Con that come with the Labo kits, the VR “headset” is solely made of cardboard and a pair of goggles.

I know, it sounds like a messy, cheap version of PS VR or something, but let me tell you that, despite being made of cardboard, Labo VR is truly exceptional and continued to impress me over and over again after playing with it all weekend long.

The starter Labo VR Kit is the introductory package for those not quite ready to jump into the full VR experience yet. It only costs $40, half of the variety kit’s price, and comes included with the VR Goggles and the Blaster Toy-Con, but if you want to check out all five of the Toy-Con’s, the price is $80 but it will definitely give you a bang for your buck.

With each Toy-Con, there exist several minigames that are to be played with each specific Joy-Con. The more of these cardboard creations that you have, the more content you can mess around with.

Speaking of these cardboard creations, since I only had the VR Goggles and the Blaster to make, I didn’t spend a ton of time with the crafting process, but still, creating just these two items took me almost four hours or so. Yes, it takes time but the directions are given to you via the Labo cartridge on the Switch itself.

I had a lot of fun building the Toy-Con as every piece just fit together so well and after hearing washers being clicked into place, rubber bands being snapped, and other satisfying sounds, I found myself with child-like joy.

Okay, so once you complete everything, the real fun begins. You put the VR Goggles on your head and you get to jump into the VR Plaza which is host to dozens of bite-sized VR experiences. These can all be played with just the VR goggles and a Joy-Con, and most of them truly immerse you into Nintendo’s VR world.

In the first game I tried out, called Animals Galore, there are several plastic animals around a field laying around you. By using the Joy-Con and keeping one hand on the VR goggles (there’s no strap) you can pick up the animals and throw them about, even high up in the air.

You can press a button and switch the camera view, allowing yourself to become smaller or bigger. I pressed a button next to an elephant and I suddenly shrank, scaring myself in the process due to this enormous animal right in front of me. I also threw them up in the air to let them fall on top of me, and as I looked up, I had butterflies in my stomach, really feeling as if I was going to be hit by these heavy toys.

Considering that the Switch screen has low resolution and graphical fidelity, outputting its visuals to a VR headset will, of course, result in even lower textures and resolution, but it’s not that bad. The worst things you’ll notice is that the backgrounds can be blurry, and if something gets too close to you the screen can wig out.

Looking into the headset and interacting with these games gave me a familiar feeling as to when I first viewed the stereoscopic 3D visuals of the Nintendo 3DS, 8 years ago. The feeling of something new, something that feels fresh, exciting, and novel.

No, Nintendo’s not the first company to use VR or cardboard for VR as a matter of fact, but this is the first time that Nintendo has experimented with VR, and it’s very exciting (if you don’t count the Virtual Boy).

I was doing all of this while standing in the middle of my living room laughing like an idiot… all to myself. Just for a few minutes,

I forgot that I was in my small and quiet studio, and I was transported to several locations such as a basketball court, a baseball field, and then once I attached the huge blaster to my VR goggles, on-rails shooting segments reminiscent of a Disney-like attraction.

Each Toy-Con has a campaign of sorts for you play around with and eventually “finish.” With the Blaster Toy-Con, there were a series of five stages that put me a self-moving take through a variety of areas and a set number of enemies to defeat and bosses to overpower.

These on-rails sections felt amazing with the Blaster Toy-Con in hand. Every time you shoot, you actually feel the kickback from the energy gun. Thanks to rubber bands and an array of cardboard bits, the gun is very responsive, moving pretty much 1:1 with the one in-game, letting you aim and shoot precisely with little error from the Switch.

I felt like I was riding an attraction at a theme park, especially during a segment where I was being slowly abducted by a U.F.O. You can look above you at the ship, look beside you, and also, look at the ground beneath you, which actually spooked me out just because it felt kind of real.

These five levels offer a ton of replayability, with high scores persuading you to try again and to aim higher; the score is based on your time, accuracy, and kill counts. Some of them were more enjoyable than others, but these shooting stages were the highlight of my experience.

Another quirky little Nintendo-like feature that you can do in the VR Kit revolves around watching 33 videos in VR. These videos range from sitting in a chair eating a plate of sushi, giving you the illusion that you, the player, are that person eating sushi.

There’s one that places you in a band, letting you pretend to play different instruments; one that has you sitting across from someone in a Mario costume, performing magic tricks; another that lets you play with a kit; and a whole bunch of others.

They are very, very strange and seem like they were all filmed in one day with most of them taking place in the same room of an apartment. I found them to be quite amusing, entertaining and reminded me of the sub-mini-games present in the WarioWare series.

As you can see, there’s a lot here in the VR Kit for you play with, and for the low introductory price, it’s definitely worth it for any fan of Nintendo or VR in general. I do recommend picking up the more expensive variety kit though because after playing with the blaster, you will immediately regret not owning the other four Toy-Con.

Also, Nintendo announced that both The Legend of Zelda: Breath of the Wild and Super Mario Odyssey will be receiving updates later this month to make them VR compatible.

Even if the kit and minigames were worth the $40, this will be the true test of whether or not Nintendo Labo VR will have long term staying power.

These two upcoming updates were my main reason for picking up the Labo VR Kit, but who could’ve guessed how much fun I would end up having with the Labo itself? Not I.