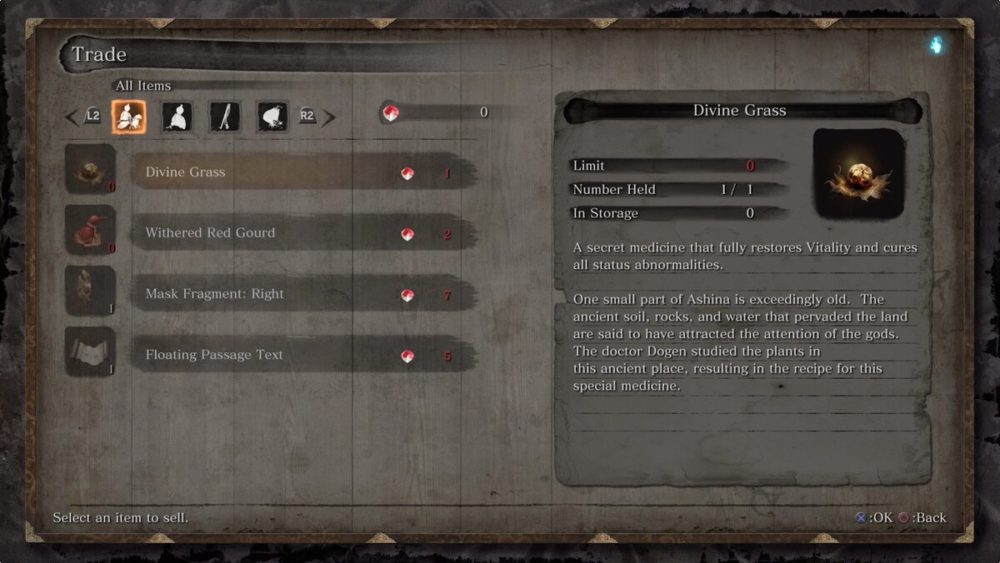 Sekiro: Shadows Die Twice is jam-packed with secrets to uncover and mysterious items to find, many of which give you absolutely no indication what they’re used for. This is, obviously, something that Souls games did previously, and FromSoftware certainly wants to do the same with Sekiro. On that note, here’s how to get the Mask Fragment and what it’s used for in Sekiro.

Actually getting the Mask Fragment, specifically it’s called the Right Mask Fragment, is a bit of process. But we’ll help walk you through exactly how to get it.

Getting the Bell Charm

First things first, you’re going to need to get an item called the Young Lord’s Bell Charm. We have a guide detailing how to do that, but it’s in the first large area, the Ashina Outskirts, you explore after the opening of the game.

Go past the first mini-boss and then stick to the right to find a house with an old women in it. Once you have the bell charm, head back to the Dilapidated Temple and use it at the Buddha Statue. This will transport you back in time and let you explore an entirely new area, the Hirata Estate.

On the right side of the island look for a strange creature in a blue pot and talk to it. This creature will allow you to trade Treasure Carp Scales for a variety of items, one of which is the Right Mask Fragment.

The bad news, however, is that you’ll need seven Treasure Carp Scales. Luckily, we have another guide to help you figure out how to get scales.

The second fragment is easy enough to find, but you’ll need 5000 Sen in order to purchase it, no small amount. We have a guide for how to get Sen fast, but basically you’ll want to find an area with enemies you can easily kill right next to a Sculptor’s Idol, then just rinse and repeat to get a bunch of gold.

Now, as to where the mask fragment is, travel to the Abandoned Dungeon Entrance Sculptor’s Idol and there’s a merchant just to the right of the statue. You can buy the fragment through them.

The third and final fragment is found in the very last area of the game, called the “Fountainhead Palace.” Once there first make your way to the Palace Grounds Sculptor’s Idol, which will be blocked by a gate. To open the gate swim out into the middle of the water, and then enter a large opening in the middle.

Once you’re at the Palace Grounds Idol, head back into the building and then back through the gate that you just unlocked. Look for the stream nearby, and then look up again to find a grappling hook point that’ll let you get up into a cave. At the end of the cave, you’ll find yet another blue pot merchant that’ll trade the final mask fragment for 12 Treasure Carp Scales.

Remember our tips from earlier for getting Treasure Carp Scales, and you can also find more scales in the Fountainhead Palace area.

What To Do With the Fragments

It’ll definitely take a while to get all three fragments, but the payoff is worth it. With all three collected you’ll automatically get the item “Dancing Dragon Mask,” which you can view from your inventory but can’t equip in any way.

Instead, the mask allows you to exchange Skill Points for Attack Power at a Sculptor’s Idol. At first you can exchange five SP for one Attack Power, but the price will go up once you’ve done that. Still, this is the only way we’ve found to increase Attack Power in Sekiro, outside of collecting and using Prayer Beads.

That’s everything you need to know about how to get the Mask Fragment in Sekiro. Make sure to search Twinfinite for even more tips and info, or check out our Sekiro guide wiki.